It’s rare to see Pope Francis bopping behind the walls of the Apostolic Palace.

Actually, if anyone has ever seen any pope dancing they’ve never said anything, nor filmed it and put it on YouTube.

Yet there was Francis with a smile on his face, grooving to the music with a delegation of Hasidic Jews at the Vatican this week as they serenaded him with guitars and a chant in Hebrew of “Long years shall satiate him.”

If Francis was swaying more than dancing, well, the Argentine pope’s tastes run more to tango. And he is 80 years old and has a sore back.

Still, when Yeshiva World News posted the brief video to YouTWhile meeting with a delegation of Hasidic Jews at the Vatican to discuss issues of common concern, Pope Francis danced to traditional Jewish music. The encounter was filmed went viral on YouTube.ube it quickly became something of a sensation.

The encounter took place during a 45-minute papal audience on May 8 with a delegation led by Polish Rabbi Edgar Gluck, who was accompanied by his son Zvi, who lives in New York, and other rabbis.

While the pope warmed to the traditional Jewish music and dance, the delegation also discussed issues of common concern, including the protection of Jewish cemeteries in Europe and fighting child sex abuse.

After the meeting, Zvi Gluck tweeted that the pope had told him and the delegation:

Zvi Gluck is the founder and director of Amudim, an organization dedicated to helping victims of sexual and substance abuse and other problems in the Jewish community.

His 80-year-old father, Edgar Gluck, is the chief rabbi of Galicia and divides his time between Poland and the U.S.

The elder Gluck has been involved in preserving Jewish cemeteries in Eastern Europe for many years and discussed the issue when he met Francis during his official visit to Poland for World Youth Day in July 2016.

Gluck previously served as a member of the U.S. Commission for the Preservation of America’s Heritage Abroad. 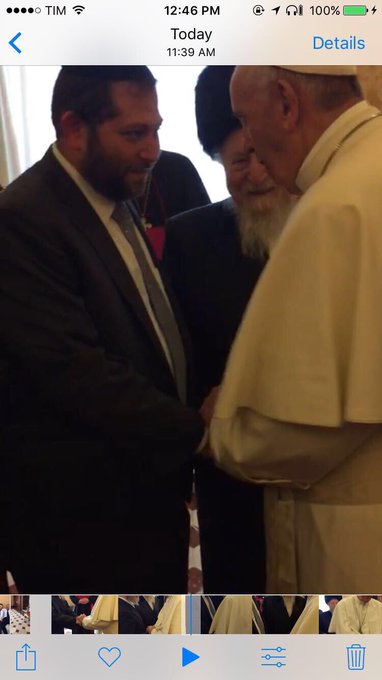 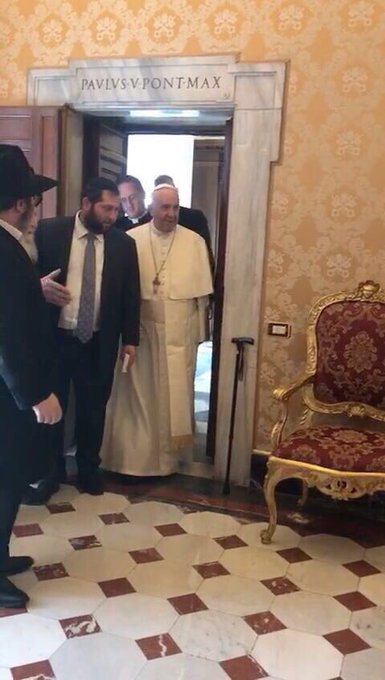 “Zero tolerance” Said Pope Francis, “We need to keep kids safe” to myself, my father and members of delegation, at meeting in the Vatican

Psalm 102.16
When the Lord shall build up Zion, he shall appear in his glory..
King James Version 1611, American Edition