What Not to Do

I have had a few experiences where Christians not only lashed out at one another, but they’ve even resorted to derogatory remarks or comments, and more often than not, it’s over a non-essential area. Surely this must grieve the Holy Spirit and quench His work in us, but it also ruins our witness for Christ. How can we expect to be filled with the Spirit when we’re filled with consternation toward others who don’t agree with us? The Apostle Paul said that it would be far better to be wronged, even if in the right, than to win at all costs. Some of the Christians in Corinth were taking each other to court, and you can be sure, God was grieved over this thing, but so was Paul. He asked, “To have lawsuits at all with one another is already a defeat for you. Why not rather suffer wrong? Why not rather be defrauded” (1st Cor 6:7)? When you speak about Christ, you can win an argument but lose a soul. Which is better? It is far, far better to win a soul than to win an argument. No one that I know of was ever debated into heaven. Jesus never forced Himself on anyone and neither should we. Jesus said, “Come to Me” (Matt 11:28) and not “I will come to you.” If we can talk someone into something, then someone else can talk them out of it. It must be the Spirit of God that quickens them (Eph 2:1) or there is no hope at all, however God can use us as a means to save others, but salvation is fully a work of God. It is just that He allows us the great privilege of entering into the labor. The problem was there were few laborers then which is why Jesus told the disciples to pray to the Lord of the harvest for more laborers because the harvest is so great and the laborers are so few (Matt 9:38). Today, there is still the need for more laborers.

Just as They Were

If a believer ever thinks that they were special and that’s why God called them, they had better stop and immediately repent of that thought. It’s possible they don’t’ understand their calling. God didn’t choose Israel because they were greater, but in fact, they were the least of the nations and the perpetual underdog in the world’s eyes, but that’s exactly why God chose them. It was so that He would receive the glory. It was the same reason that God parred down Gideon’s army to 300. If we think we are better, we are actually resisting God, because God is opposed to the proud and gives His grace only to the humble (James 4:6). We are no better than anyone, especially the unsaved. When we begin to esteem ourselves as better than others, we are living contrary to the will of God (Phil 2:3-8). Even Jesus humbled Himself to the point of death on a cross, so Paul jogs our memory and wants us to remember, that “some of such were” were at one time, when he lists the sins that most of the world does (and we did at one time). We read that “neither the sexually immoral, nor idolaters, nor adulterers, nor men who practice homosexuality, thieves, nor the greedy, nor drunkards, nor revilers, nor swindlers will inherit the kingdom of God” (1st Cor 6:9-10), but we’re not to look down on others who do those things, because “such were some of you. But you were washed, you were sanctified, you were justified in the name of the Lord Jesus Christ and by the Spirit of our God” (1st Cor 6:11). That’s the only difference between us and unbelievers. God choose us (Eph 1), and not we choosing Him. God simply set His love upon us (Rom 5:8), and perhaps He on those who still yet disbelieve. It is only because of God’s grace that we’re still not living that way and have God’s wrath abiding on us (John 3:36b). It’s not because of us, but because of Who He is, and Who we are in relation to Him. The Christian cannot claim superiority, “For consider your calling, brothers: not many of you were wise according to worldly standards, not many were powerful, not many were of noble birth. But God chose what is foolish in the world to shame the wise; God chose what is weak in the world to shame the strong” (1st Cor 1:26-27), so in fact, “God chose what is low and despised in the world, even things that are not, to bring to nothing things that are” (1st Cor 1:28). 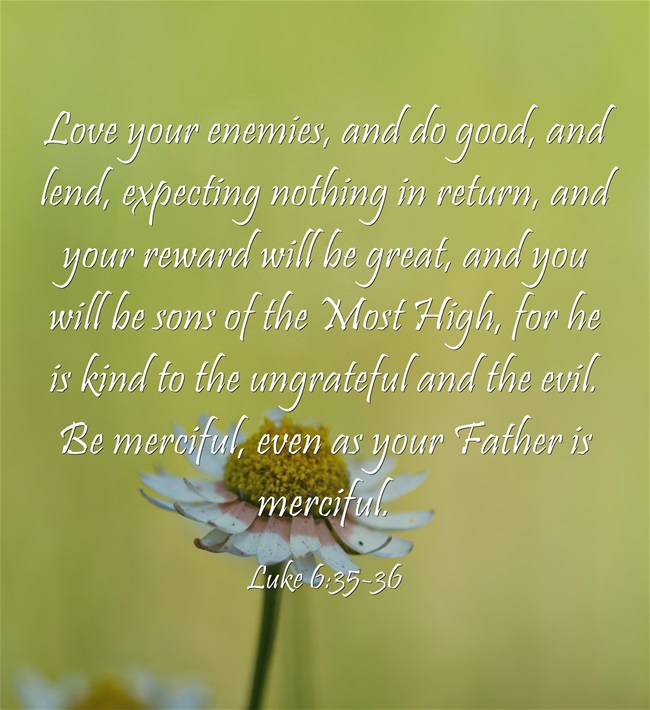 If we think we can convince others about Christ, we don’t realize that it is God Who calls us into His kingdom (John 6:44). If it were up to us, none of us could be saved, but God can use us as a means to save others if we will let Him. We should understand that it is God Who must quicken them in order for them to understand Who Jesus is and why they need Him. And, the power is in the gospel, not in us (Rom 1:16; 1st Cor 1:18), so we simply have to share the Word and let the Spirit of God work in their hearts. It takes the Word of God and the Spirit of God to make the children of God, so it’s all about God, but it’s our involvement that God uses as part of the means to save some. It is not our responsibility to save anyone; it is their response to His ability, even though it is our responsibility to tell them. That much we know (Matt 28:18-20; Acts 1:8).

If we truly seek to be more Christ-like, we will react like Christ did. Jesus tells us how to respond in the Beatitudes: “But I say to you who hear, Love your enemies, do good to those who hate you, bless those who curse you, pray for those who abuse you” (Luke 6:27-28), so “as you wish that others would do to you, do so to them” (Luke 6:31). That’s not difficult to understand. We treat people the way we would want to be treated, even if we’re not treated that way. Jesus says, “love your enemies, and do good, and lend, expecting nothing in return, and your reward will be great, and you will be sons of the Most High, for he is kind to the ungrateful and the evil. Be merciful, even as your Father is merciful” (Luke 6:35-36). That’s how to be like God. Be forgiving, even when people don’t deserve it, for neither did we (Rom 5:6-10)! If we only love those who love us (which of course we should), we’re no different from the world. It is only when we love our enemies, pray for God to bless them that curse us, and do good to them that mistreat us, we more like Christ. We must give people respect. God is no respecter of persons and neither should we (Acts 10:34; Rom 2:11).

I wrote this to admonish myself first, and then hopefully, admonish other believers to speak with kindness and with gentleness and respect when giving others the reason you have hope in Christ (1st Pet 3:15). Without giving people respect, how can we ever expect them to listen to us? It is more important to be respected for your beliefs than to be popular for them, but even if we’re not respected, we must show respect to others. To respond in kind is to destroy your witness for Christ. Christians can be very un-Christ-like at times. I know. I’ve done it. I admit it. I have friends who are Christian, atheists, and agnostics, and who are of various other religions, and for my past blunders, I apologized, and to others, I asked them to forgive me for causing offense. Now I strive to respond more like Christ.

Jack Wellman is Pastor of the Mulvane Brethren Church in Mulvane Kansas. Jack is host of Spiritual Fitness and also the Senior Writer at What Christians Want To Know whose mission is to equip, encourage, and energize Christians and to address questions about the believer’s daily walk with God and the Bible. You can follow Jack on Google Plus or check out his book Teaching Children the Gospel available on Amazon.

Psalm 19.10
More to be desired are they than gold, yea, than much fine gold: sweeter also than honey and the honeycomb..
King James Version 1611, American Edition