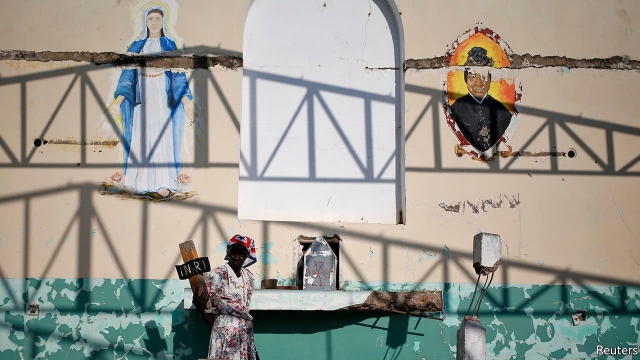 “IF SOUTH SUDAN secedes,” Omar al-Bashir told supporters at a rally in 2010, “we will change the constitution”, paying no attention to “diversity of culture”. The Sudanese president revisited the subject two years later. “Our template is clear: a 100% Islamic constitution,” he said in a speech to Muslim leaders in the capital, Khartoum. As for non-Muslims: “Nothing will preserve your rights except for Islamic sharia.”

The south seceded in 2011, taking with it most of Sudan’s Christians. After the split churches in the north were burned. Then came demolitions: at least 20 since 2011. Four took place in August this year. About 27 other churches are listed for bulldozing. The government says it is merely removing unlicensed buildings. But only churches seem to be getting knocked down. In any case, the government announced in 2013 that it would no longer grant licences for the construction of new churches. “Christians have no rights here any longer,” says Reverend Kuwa Shamal of the Sudanese Church of Christ, one of several church leaders who have been arrested on specious charges of spying and undermining the constitution.

Sudan’s treatment of Christians has long been dire. Forced assimilation in the 1980s and 1990s helped spark its decades-long civil war. “Denial of religious freedom” was cited by Bill Clinton, then America’s president, among his reasons for imposing sanctions on Sudan in 1997. A peace agreement with southern rebels in 2005 brought some respite, but “after the independence of South Sudan the government decided there was no space for Christians,” says Muhanad Nur, a human-rights lawyer in Khartoum.

Many Western observers agree. On November 17th America’s deputy secretary of state, John Sullivan, told Sudan to stop smashing churches. Open Doors, an NGO, ranks Sudan as the fifth-worst country in the world for the persecution of Christians. In June, American congressmen from both parties wrote to President Donald Trump urging him to delay lifting sanctions for another year, citing in particular “state-sanctioned persecution of Christians”. (They were lifted anyway on October 12th to prise Sudan from the orbit of Iran, a long-standing ally.)

Although foreigners focus on Sudan’s central government, much of the repression is happening locally and sporadically. Church demolitions in Khartoum, for instance, are carried out by local authorities. Many suspect they are more interested in grabbing valuable land than in suppressing religious minorities. The governor of Khartoum, Abdel Rahim Muhammad Hussein, has threatened to kick out tens of thousands of South Sudanese refugees, many of whom are Christian. He claims they cause insecurity and spread disease. Such words are worrying when coming from a man who, like Mr Bashir, is wanted by the International Criminal Court on charges of crimes against humanity.

Yet Sudanese citizens are far more welcoming. Sudan still has many Christian schools, most of whose pupils are Muslim. And many of the Christians that Sudan lost when the south broke away have since returned: about half a million South Sudanese have crossed the border since the start of a civil war there in 2013. Father Juma Charles of St Matthew’s Catholic Cathedral in Khartoum says that so many of his flock have returned that prayer centres that were closed in 2011 are open again