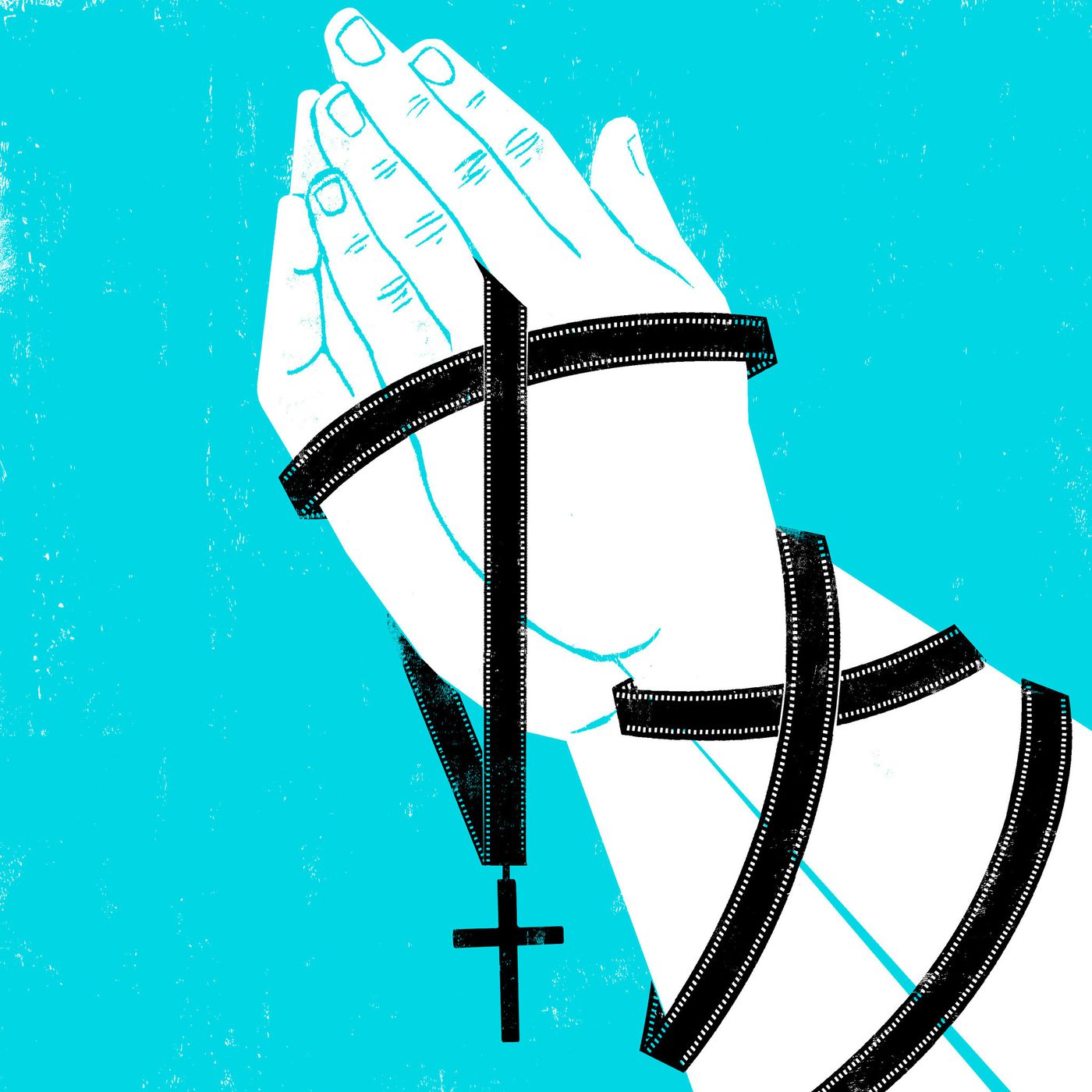 At one point in the hit musical biopic “I Can Only Imagine,” Bart Millard (J. Michael Finley), a Texan singer-songwriter touring with his up-and-coming Christian rock band MercyMe, receives a rude awakening from the industry he’s trying to woo. “You’re just not good enough,” says one record-label rep, inadvertently echoing the cruel words of Bart’s abusive father (Dennis Quaid) and triggering a wave of flashbacks to the boy’s traumatized upbringing.

Those flashbacks made me roll my eyes, but they also filled me with a strange sense of guilt. As someone who considers himself both a lover of cinema and a follower of Jesus Christ, I must confess that the words “You’re just not good enough” have generally summed up my own opinion of the many, many Christian-themed independent productions that have sprung up since the smash success of “The Passion of the Christ” 14 years ago.

That may be a harsh judgment to render against a group of pictures that, at least in their broad range of genres and stories, would seem to resist easy pigeonholing. Companies as different as Pure Flix Entertainment, Stoney Lake Entertainment and Sony’s Affirm Films have churned out old-school period epics, sentimental heart-tuggers, pro-marriage romantic dramas, Rapturous disaster flicks, political provocations and flat-out comedies (not all of them intentional), most of which have nonetheless been filed under the handy if reductive term “faith-based entertainment.”

These pictures have offered an oasis of sorts for Christian moviegoers who claim the industry doesn’t reflect or respect their spiritual values. I’d respond that in some cases, those moviegoers simply aren’t looking hard enough; if they were, brilliant dramas like Rodrigo García’s “Last Days in the Desert” and Martin Scorsese’s “Silence” might have become the church-fueled hits they deserved to be.

But there is some truth to the notion that Hollywood doesn’t always know how best to serve a significant portion of its audience. Look no further than the modest furor over Disney’s adaptation of “A Wrinkle in Time,” a movie I admired for its crazily unorthodox vision, but one curiously devoid of the biblical references that Madeleine L’Engle included in her original novel. If L’Engle — a refreshingly free-thinking, non-doctrinaire Christian writer — had a choice in the matter, I imagine she’d prefer a film stripped of overt religious references to one wallowing in grotesque spiritual kitsch, especially in light of the examples the “faith-based” community has given us.

I’ve liked my share of these pictures. I had a soft spot for “The Song,” a lush marital drama set in the country-music industry, and wasn’t entirely immune to the insistent, afterlife-peddling charms of “Heaven Is for Real.” But for the most part, these examples have been rare and decidedly mixed blessings, small standouts in a sea of movies that haven’t given adherents or atheists much to believe in.

My reservations have little to do with standard criticisms like awkward performances or clunky production values — venial sins, surely, for new filmmakers trying to find their way. What rankles about a cinematic sermon like “Letters to God” or a morally offensive wartime drama like “Little Boy” isn’t the mediocrity of the craft; it’s the calculation inherent in the enterprise. There’s a smug complacency with which these movies preach a message ostensibly meant to set the world passionately ablaze.

I didn’t check all these prejudices at the door when I recently caught up with “I Can Only Imagine,” “Paul, Apostle of Christ” and “God’s Not Dead: A Light in Darkness,” the three highest-profile Christian-themed releases of the spring moviegoing season. But I watched all of them in a tentative spirit of optimism, intending to gauge the present state of what I have often hesitated to describe as art, and hoping to be pleasantly surprised. And at least two films in this cinematic trinity largely succeeded in overcoming my inner skeptic.

Let’s dispense with the one that didn’t. “God’s Not Dead: A Light in Darkness,” which opened Friday in wide release, is the third film in a startlingly successful Pure Flix franchise that began with 2014’s $60 million-plus grossing “God’s Not Dead.” Directed by Michael Mason (taking over for Harold Cronk), “A Light in Darkness” resumes the legal misadventures of Pastor Dave (David A.R. White), who, as the story begins, has just been released from prison for failing to turn over his sermons to the government. (To understand why a court would subpoena a pastor’s sermons, I’d direct you to “God’s Not Dead 2,” but you might interpret that as a recommendation.)

Dave returns home to find his college-based church under attack, first by an act of arson that kills his co-pastor, and then by the school itself, which wants to remove this lightning rod for controversy from campus. Dave calls on his estranged brother (John Corbett), an attorney and, wouldn’t you know it, lapsed believer in need of a spiritual pick-me-up. The stage is set for a courtroom melodrama crawling with straw-man atheists, pseudo-introspective laments and specious arguments concerning the separation of church and state.

The result would be a lousy story even if it weren’t such a tedious exercise in self-victimization. I know that many Christians feel they are the last members of American society still being denied the gift of tolerance, a belief to which they are no less entitled than their faith in God. But even allowing for a measure of legitimate grievance over the silencing of evangelical doctrine in mainstream society, this would not be a persuasive way to dramatize it. When Jesus warned his disciples that they would face persecutions, the suffering we see in this pernicious, self-admiring drivel is probably the very opposite of what he had in mind.

“God’s Not Dead: A Light in Darkness” does end with the hopeful message that Christians should be quick to hear and slow to anger — a lesson that plays out to more compelling, complicated effect in “I Can Only Imagine.” The movie, directed by brothers Andrew and Jon Erwin (making quite a rebound from their execrable family-values comedy “Moms’ Night Out”), has emerged as the sort of hit that indie Christian filmdom longs for and rarely achieves. As of this writing, it ranks third at the weekend box office, having grossed nearly $40 million (more than five times its production budget) since its March 16 release by Lionsgate and Roadside Attractions.

No one familiar with Millard’s mega-hit signature song, also called “I Can Only Imagine,” will be shocked to hear of the movie’s robust commercial success. Nor will it come as any surprise to even the most naive moviegoer that Millard, the protagonist of this slick but sincere inspirational drama, will have to reconcile with his bitterly cruel father (played with ferocious self-loathing by Quaid). Then and only then can he reach that place of peaceful enlightenment where he can write the song, which will eventually become a triple-platinum hit and catapult MercyMe to superstardom.

But who needs surprises? I say this as someone who loves Millard’s song and listened to it repeatedly during my college Christian fellowship days, sometimes lip-syncing into an invisible mic and envisioning a future divine encounter of my own. It may be catchy as you-know-what, but it’s also a simple, soaring piece of song craft, overflowing with the kind of emotion that disarms my defenses even now. While the movie is not without its overly airbrushed moments, its telling of Millard’s story manages to raise — or at least stumble into — significant questions about the power of art (whether it’s an album, a movie or something else) that arrives bearing the weight of an ideology.

How much value are we willing to ascribe to a work of art simply because it aligns with our beliefs? And how much can we trust our tears? Any honest believer who has sat through a worship service has certainly asked whether they are hearing the authentic voice of God or simply being emotionally manipulated by the music — and then proceeded to wonder if the two might not, somehow, be one and the same.

I certainly can’t say whether the swells of emotion I felt while watching “Paul, Apostle of Christ” are attributable to the Holy Spirit or simply a competent level of artistry by all involved, and I’m not terribly interested in parsing the difference. By far the most intelligent, absorbing and stirring of these three movies, writer-director Andrew Hyatt’s well-acted drama of imprisonment and martyrdom implicitly rebukes the “God’s Not Dead” franchise by reminding us what actual persecution looks like. It returns us to a vision of ancient Rome (the film was shot on location in Malta) where some of Christ’s earliest followers were routinely burned alive in the streets or condemned to death in the arena.

But even these potentially rabble-rousing moments are dramatized with sober restraint, much like the conversations that play out among the apostle Paul (an excellent, grizzled James Faulkner), Luke the Evangelist (Jim Caviezel, forever the face of Jesus in “The Passion of the Christ”) and their fellow Christians as they debate how best to ensure their survival — and more importantly for Paul, the survival of the gospel.

“Paul, Apostle of Christ” may fall into that creakily venerable tradition of impeccably British-accented biblical pageantry, but from the first frame, Hyatt’s approach is marked by clear-eyed intelligence and a refusal of the obvious. It’s telling that Paul’s dramatic moment of conversion on the road to Damascus, which a different movie might have saved for the climax, is relegated to a few quick flashbacks. This is a movie about the challenge of remaining true to one’s beliefs after the spiritual high has worn off, the miracles have ceased and God seems to have fallen silent.

“What can a non-believer get out of it?” is a question that often gets leveled, not unjustly, at these movies, and in the case of “Paul, Apostle of Christ” I would say there’s real value in a story willing to linger in its own uncertainty, and also willing to extend compassion in all directions. Hyatt’s film argues, with eloquence and gravity, that Christ’s message was predicated on sacrificial love, and that any attempts to seize political power or wage war in his name are in fact a rejection of his truth.

This is a lesson well worth absorbing, if the embattled state of modern American evangelicalism, torn between might-is-right ideology on one hand and a toxic level of self-pity on the other, is any indication. “Paul, Apostle of Christ” might be too small, too wise and too resolutely uninspirational to shift the balance. But at a time when too many filmmakers still mistake message-mongering for art, a picture that quietly dignifies the medium is more than sufficient for me.

Psalm 119.141
I am small and despised: yet do not I forget thy precepts..
King James Version 1611, American Edition