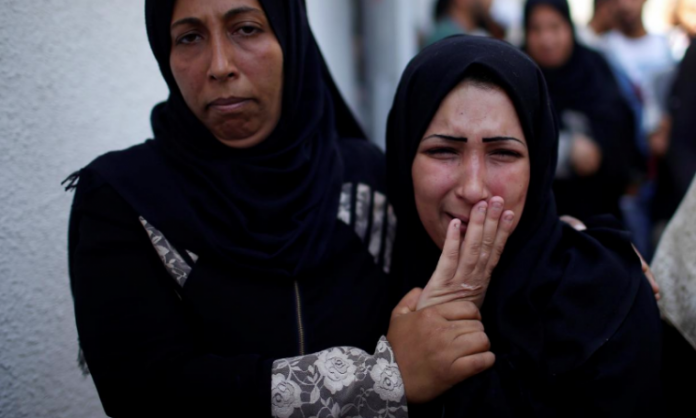 There’s a chilling disjunction between the glossy celebrations and political love-in on show yesterday as the US embassy in Jerusalem opened, and the carnage just 50 miles away in Gaza.

A string of press releases from well-known US evangelical leaders congratulated President Trump on the move. None showed any awareness of its consequences. As the grim toll of dead and injured rose throughout the day, Ronnie Floyd said the opening was ‘the prophetic answer to the prayers of millions of Christians and Jews alike, who believe the Scriptures when they say God will bless those who bless Israel’. David Jeremiah commended ‘a truly historic and courageous decision’. Jentezen Franklin offered ‘Five reasons we should always support Israel’. There are plenty more.

Perhaps we shouldn’t condemn these statements out of hand; after all, they were pre-prepared and released to a schedule. But they still represent a blind spot that’s shared across a wide spectrum of evangelical and right-wing politics, and that has its roots in a dangerous duality.

In this world-view there’s an existential struggle between good and evil, with Israel always and inevitably on the side of good. They do not see Palestinians as individual people, with hopes, fears and dreams of their own. If they think of them at all, it’s as the embodiment of evil. They screen out anything that challenges this view, or warp reality to fit it. All Palestinian demonstrators become ‘armed Hamas supporters’. Their mass protests become in themselves a justification for shooting them. Questions about why they’re protesting have no meaning. Every demonstration becomes an example of ‘how much they hate us’ – and the violence with which they are met creates a vicious circle in which hatred is fed by hatred.

Let’s be clear: this is not an anti-Israel polemic. Israelis have a right to live in peace and safety like everyone else. You do not have to be anti-Israel in order to be profoundly shocked by what’s happening in Gaza. And the assumption that you do is itself a symptom of a discourse that is fundamentally broken. It’s virtually impossible to speak into the evangelical mind in this way and be heard.

Yesterday was a shameful day. Yes, Hamas exploited – even organised – much of the protests. Yes, no one would have been killed if they’d not been charging at the border.
But no one can tell me that the correct response was to fire live ammunition at unarmed Palestinians.

The silence of evangelicals on Gaza, set alongside their vocal praise for Trump, is an enduring shame. Palestinians want homes, jobs, freedom, dignity and safety. Many of them want back what they lost 70 years ago when Israel was established. Yes, some of them think they can get it by violence. But demonising a whole population because of that is wrong.

There’s a chapter in Ezekiel the evangelical supporters of President Trump would do well to ponder. It’s about individual responsibility, and the prophet refers to the proverb, ‘The fathers eat sour grapes, and the children’s teeth are set on edge’ (verse 2). Then he says: ‘As surely as I live, declares the Lord, you will no longer quote this proverb in Israel. For every living soul belongs to me, the father as well as the son – both alike belong to me. The soul who sins is the one who will die.’

Palestinian and Israeli souls alike belong to God. They are not ‘good’ or ‘bad’ because of their ethnicity or political opinions. They cannot be judged righteous or unrighteous by the side of the border they inhabit. And evangelical Christians should repent of their blindness and read their Bibles.

As Alexander Solzhenitsyn wrote: ‘Gradually it was disclosed to me that the line separating good and evil passes not through states, nor between classes, nor between political parties either – but right through every human heart – and through all human hearts.’ And as Shane Claiborne wrote yesterday: ‘I refuse to believe that Israeli lives are more precious than Palestinian lives. I refuse to believe that Palestinian lives are more precious than Israeli lives. Dozens of Palestinians have died today. That should grieve every one of us, no matter what your politics are.’

Psalm 111.1
Praise ye the Lord. I will praise the Lord with my whole heart, in the assembly of the upright, and in the congregation..
King James Version 1611, American Edition