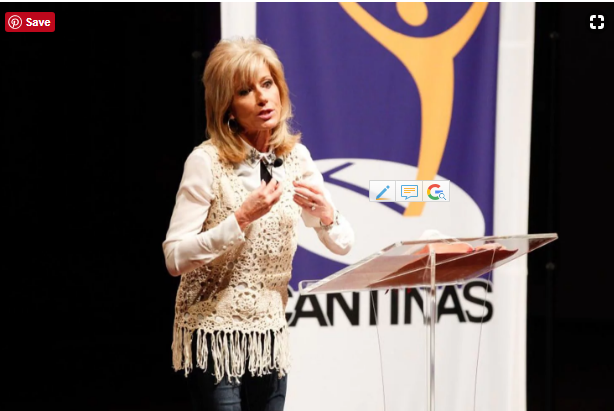 As a single woman and a professional author and editor, Gina Dalfonzo doesn’t fit the stereotype of a conservative Christian woman whose life is built around home and motherhood. But Dalfonzo actually has no problem with the traditional idea that God intended men and women to have different roles. In fact, she cherishes it. She’s always belonged to evangelical churches that are led by men only, a model she feels connects her through time to Jesus.

“Christ was God come to Earth, and for whatever reason he chose to come as a man,” said Dalfonzo, 42, who lives in Springfield, Va.

But in the era of #MeToo, Dalfonzo and a new cohort of  conservative evangelicals are increasingly taking issue with how other traditionalists, particularly men, interpret complementarianism — or the belief that men and women have distinct, or complementary, roles at home and in church.

Was, for example, the oft-quoted scripture from Colossians 3:18, “wives, submit to your husbands, as is fitting in the Lord,” intended to include women who are abused by their husbands? Is complementarianism leading to the proper reverence for women as equal human beings, which many believe is God’s intent, or is it being used as a biblical disguise for gender discrimination and belittling and lascivious behavior?

“This cultural moment has brought so much to the surface,” Dalfonzo said. “It seems like so many things are emerging into the light now, some of which have been going on for a while, and a lot of us are just becoming aware of it.”

A rare public debate among conservative Christians has erupted after a revered Southern Baptist leader was accused of making demeaning remarks about women. A tape surfaced in April of Paige Patterson, president of Southwestern Baptist Theological Seminary in Fort Worth, preaching from the pulpit that an abused woman should stay with her husband, praying alongside their bed at night and being “submissive in every way that you can.” Another taped sermon included a comment about the body of a teenage girl, and another criticized female seminarians who don’t work hard enough to look good.

Thousands of Southern Baptist women, including some prominent writers and leaders, signed a letter saying the denomination cannot allow “a leader with an unbiblical view of authority, womanhood and sexuality” to remain, and several top Southern Baptist pastors have condemned aspects of Patterson’s words. Southern Baptists are the second-largest Christian group in the United States and a major force in conservative faith.

The matter could come to a head Tuesday as the board of trustees of Southwestern meets to discuss his future. There is pressure on Southern Baptist leaders to rebuke Patterson for his comments, perhaps by removing him from his job. Some are worried about the optics of plans for Patterson to give one of the main sermons at the movement’s convention next month and hope it won’t happen.

It would be striking for a woman-led revolt to change the legacy of Patterson, one of the main figures credited with steering the Southern Baptist Convention in the 1980s and ’90s away from liberalizing changes going on in the wider culture and into the conservative religious force it is now. He and a few others did that in part by passing measures that tied commitment to the inerrancy of the Bible to directives against women pastors and a view of marriage that calls men the “leaders.”

“Southern Baptists believe the Bible and have a high regard for the authority of scripture, and Paige Patterson has been widely understood for decades as a key individual God used to protect the authority of God’s word,” said a high-ranking woman in a Southern Baptist entity who signed the letter. She spoke on the condition she not be named because of the sensitivity of talks about Patterson’s position.

Even when people noted problems with Patterson’s sermons, “they revered him,” she said.

“I think what we’re responding to is the realization that all of a sudden, there is this dawning of awareness — what if this theology we agree with is misappropriated to dismiss, demean, or sexualize and objectify women?” said the woman who works with the Southern Baptist entity. “I don’t want to dismiss the theology that I believe to be true, but that theology is not going to stop me from calling out the behavior.”

The Patterson saga has opened up a wide-ranging conversation among conservative evangelicals about what scripture actually says about the proper roles of men and women.

Some women are urging a new look at familiar scriptures, including the oft-quoted Colossians 3:18. The phrase “in the Lord,” some say, has been played down, and means that women should support their husbands when the men are being good, just and Christ-like.

They also say the scripture is specifically about marriage and that there is no biblical reason women generally should automatically defer to men. They say the word submission has been taken out of the full biblical context and note that Ephesians 5:21 says, of Christian households: “submit to one another out of reverence for Christ.”

“This idea of mutual submission gets missed,” said Rachael Denhollander, an attorney who was the first former gymnast to speak out about being abused by former USA Gymnastics team physician Larry Nassar.

Denhollander and her husband, a seminary student at Southern Baptist Theological Seminary, the country’s largest seminary, embrace the idea of gender difference but say the term “complementarian” has become so widely and, in their view, incorrectly used that they don’t use it.

“Scripture teaches mutual submission and mutual responsibility,” she said. “I’d say Jacob is the head of our household. What that means in our marriage is that he bears an incredible amount of responsibility, but that doesn’t mean women don’t. What it means is that Jacob is the one to come and say, ‘I’m sorry, I didn’t handle this well,’ for example. He is the one who takes leadership in setting the pace for doing what’s right.”

Attitudes about gender among evangelicals differ widely from those held by other faith groups, and by Americans as a whole.

Thirty or 40 years ago there was a more widely shared definition of what it means to be complementarian, but as the roles of evangelical women in society have evolved, so has that definition. Like all women, evangelical women are heading in greater numbers into the workforce and into leadership positions not only in offices but also in sprawling, modern megachurches — which today run schools, music operations and other small businesses. The role of the Southern Baptist pastor is reserved for men, but there are lots of church leadership positions women can assume.

Today, people who claim the label “complementarian” include everyone from those who think women should defer to men, to those who think it means a semi-egalitarian, heterosexual household in which husband and wife both work but the woman is, for example, the one who cuts back her hours when children are small. It also includes those who think a woman can be a top administrator in an office or even a church or seminary — or even be president or a congresswoman, but she can’t teach theology in many Southern Baptist institutions since she can never be a pastor.

Complementarian role models in 2018, Dalfonzo said, could be people like Tammie Jo Shults, the former Navy fighter pilot who made news in April when she calmly landed a damaged Southwest Airlines plane on which a passenger died after a window blew out. Shults “has remained committed to living out biblical gender roles at home and church and to teaching fellow female pilots how to model biblical femininity,” according to the evangelical magazine Christianity Today, where Dalfonzo is an editor.

Before the Patterson tapes, the release of then-candidate Donald Trump’s comments on a 2016 “Access Hollywood” tape galvanized a debate about gender and sexism among conservative evangelical women, some of whom refer to themselves as “second-generation complementarians.”

Beth Moore, a celebrated Southern Baptist teacher and writer with almost 1 million followers on Twitter, drew attention earlier this month with ablog post entitled “A Letter To My Brothers.” In it, the 60-year-old described the way she had, over the decades, swallowed many slights and insults by pastors and even male seminarians. All the while, she said, she had worked diligently to keep holding up men — as she saw her scriptural obligation. Moore considers herself complementarian.

“I learned early to show constant pronounced deference — not just proper respect which I was glad to show — to male leaders and, when placed in situations to serve alongside them, to do so apologetically,” she said. “I issued disclaimers ad nauseam. I wore flats instead of heels when I knew I’d be serving alongside a man of shorter stature so I wouldn’t be taller than he,” she wrote. “Then early October 2016 surfaced attitudes among some key Christian leaders that smacked of misogyny, objectification and astonishing disesteem of women and it spread like wildfire. It was just the beginning. I came face to face with one of the most demoralizing realizations of my adult life: Scripture was not the reason for the colossal disregard and disrespect of women among many of these men. It was only the excuse. Sin was the reason. Ungodliness.”

Whatever comes of the meeting this week, some conservative evangelical women say they’ve begun to see some changes. For example, some evangelical seminaries are hosting forums built around women and seeking their feedback and experience; others are asking professors to look more closely at their curriculum and resources to ensure they include female thinkers, said Halee Gray Scott, an evangelical writer and researcher who consults on women’s leadership.

Albert Mohler, a theologian who is president of Southern seminary noted that the number of women studying at his school has doubled in the past 25 years (as a percentage of the student body, the number has remained the same, about a quarter).

But it’s unclear whether such measures will lead to systemic changes meant to  increase respect for women.

The Patterson tapes were particularly painful, Scott said, because it surfaced the worst interpretations of complementarianism. “Now we’re realizing, this viewpoint has ramifications,” she said.

Denny Burk, president of the Council on Biblical Manhood and Womanhood, mulled where it’s all leading — while managing not to criticize Patterson directly.

“Within the covenant of marriage, an abusive husband isn’t a complementarian,” said Burk, who is also a biblical studies professor at Boyce College, the undergraduate part of Southern Baptist seminary. “He’s rejecting his role as leader and protector and provider in his marriage. So I think this a good opportunity for us to just state clearly what scripture says.”

Asked about Patterson’s comments specifically, about abuse and divorce and female bodies, Burk said that “men and women are created equally in the image of God. They have equal value, there is no superiority or inferiority before God.”

Interpreted correctly, “Biblical complementarianism is always going to bless and honor and protect women. Anything else falls short.”

The professor was silent for a full minute. Then he spoke.

Historians are skeptical of “new revelations” about Martin Luther King

Trump Evangelical Adviser: ‘God Is Not An Open Borders Guy’

Psalm 94.14
For the Lord will not cast off his people, neither will he forsake his inheritance..
King James Version 1611, American Edition