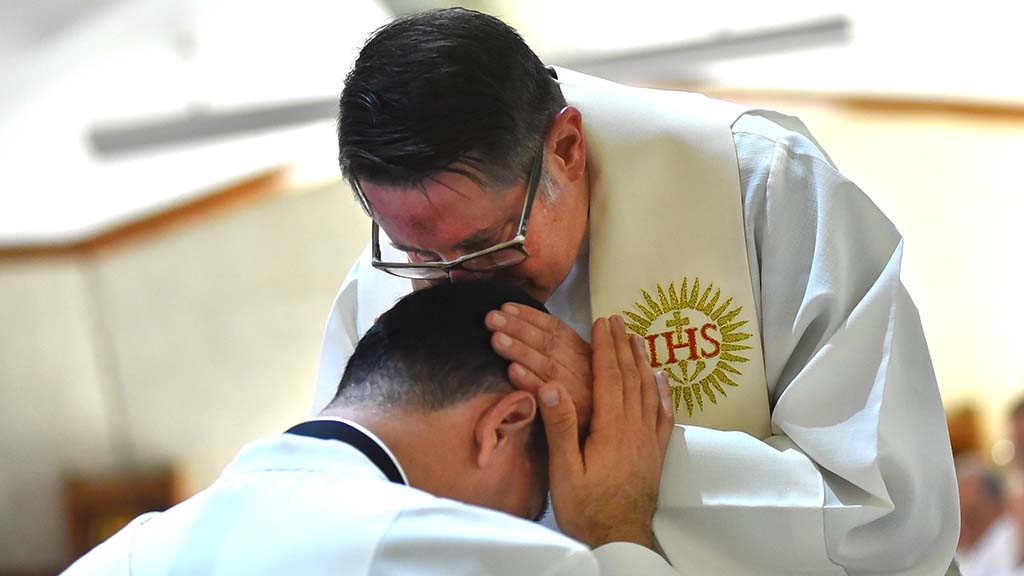 Alejandro Baez was born in Jalisco, Mexico, immigrated to the United States as a teen and worked in states as far away as Alaska and New York. He studied vocals and piano at Juilliard.

This weekend, he came full circle — back at the Mexican border, seeking joy in the priesthood.

Baez was one of four men ordained as Jesuit priests Saturday morning at Our Lady of Mount Carmel in San Ysidro, which has a view of the Tijuana hills.

And the location of the annual Jesuit ordination was not random. In fact, it had been in the making for about a year.

“We chose San Diego really because it was a way of showing how important immigration is to us,” said the Rev. Scott Santarosa, provincial for theJesuit West province of 10 Western states. “Two of the four men are themselves immigrants. The other two, as part of that formation, worked with deported immigrants in Nogales.”

One of the province’s values is working with immigrant people, he said. “So it’s a way of really standing with those whom we say we serve and value.”

Speaking to the gathering of about 80 Jesuits, family members and parishioners, San Diego Bishop Robert McEloy asked, “Is this border a bridge or a barrier? At the heart of the debate lies our heritage as a nation and the reality that the United States was largely formed in the journeys of those who came here seeking freedom and refuge from oppression.”

“The present-day denial of those journeys is our nation’s shame,” he said.

Psalm 78.10
They kept not the covenant of God, and refused to walk in his law;.
King James Version 1611, American Edition