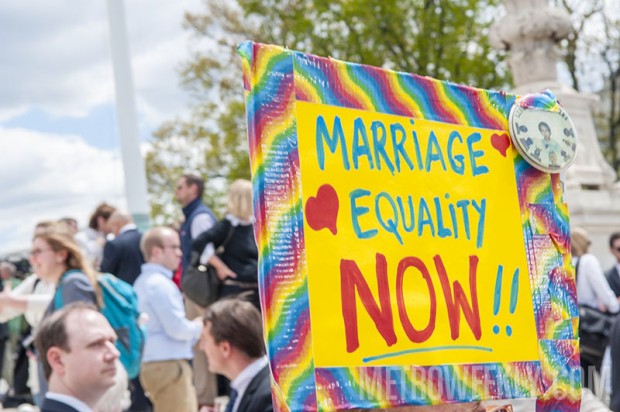 A new report has found that a majority of young evangelicals in America approve of equal marriage.

The findings come from a study by HRC, released Thursday, called Coming Home to Evangelicalism and to Self, which is intended to help LGBTQ people who still want to remain religious.

“Evangelical Christians who are [LGBTQ] often find it difficult to be fully themselves in their church communities,” HRC wrote, adding that being rejected can bring “pain, and sometimes deep and lasting trauma, to the LGBTQ person who seeks to remain faithful both to God and to their understanding of themselves.”

While 53% of young, white evangelicals support marriage equality, only a quarter of white, older evangelicals do so.

Such a generational divide existed regardless of ethnicity. Seventy-five percent of young Hispanic Americans and 69% of young black Americans support same-sex marriage, compared to Hispanic seniors at 38% and African-American seniors at 40%.

Asian-Pacific Islander Americans were the only group to have a majority in both generations, with both young and old supporting equal marriage at 84% and 54%, respectively.

HRC found that 45% of young, white evangelical Protestants would reject policies that allow the right to refuse service of LGBTQ people for religious reasons and 54% support LGBTQ non-discrimination protections.

Two-thirds of black Americans and six in ten Hispanic, Asian-Pacific Islander and white Americans disapprove of service refusals due to sexuality or gender identity.

Lisbeth Melendez Rivera, HRC Foundation director of faith outreach and training, said the intention of the guide is to help evangelical leaders to accept and love LGBTQ members who still want to be part of the church.

“Within evangelical churches, many LGBTQ people, their loved ones and their allies are putting in the important work to create a safe and welcoming place to practice their religion,” she said. “HRC is proud to release this powerful guide as part of our ongoing effort to help faith leaders and organizers fully embrace the LGBTQ faithful.”

Psalm 114.1
When Israel went out of Egypt, the house of Jacob from a people of strange language;.
King James Version 1611, American Edition