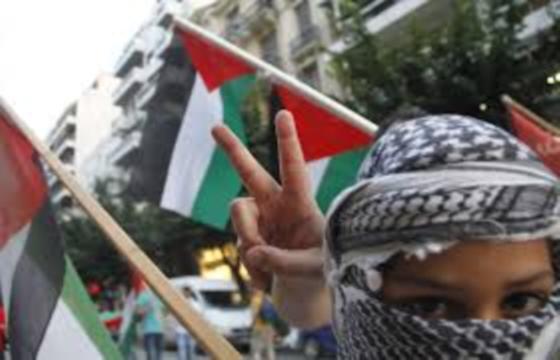 The afternoon of Monday, May 14 offered a grim picture of American evangelicalism. At the opening of the United States’ newly relocated embassy in Jerusalem, American pastors John Hagee and Robert Jeffress offered up prayers of celebration while fewer than 50 miles away Israeli forces indiscriminately killed at least 58 Palestinian protesters in Gaza and injured thousands more.

“We thank you, O Lord, for President Donald Trump’s courage,” Hagee said, as Israeli soldiers opened fire with live rounds upon Gazan men, women, and children near the fence that serves as a blockade. Jeffress, too, offered thanks for a president who “boldly stands on the right side of history” and of God.

Earlier this month, the US State Department announced an end to all US funding to the United Nations Relief and Works Agency for Palestine Refugees in the Near East (UNRWA) –an agency devoted to offering educational, health, and social services to more than 5 million Palestinian refugees. The decision, criticized even by Israeli defense officials, was praised by the Christian Broadcasting Network as “a potential blessing.”

But even as these evangelical leaders and their associated Christian Zionist organizations marked May 14 as a day of triumph, a strongly dissenting evangelical movement continued to find its voice.

Hours after the embassy opened, a diverse multifaith group including evangelical Christians gathered in front of the White House for a prayer vigil for peace. Organized by Christians for Middle East Peace (CMEP) — an ecumenical organization led by former World Vision senior director of advocacy and outreach Rev. Dr. Mae Elise Cannon — the vigil decried the embassy move as a “major setback” to peace that “[neglects] the Palestinian history” of Jerusalem.

“One of the aspects that we found so alarming about the recent embassy relocation was the Trump administration’s decision to feature prominent Christian leaders at the event,” said Cannon. “We feared that it would have the effect of turning a debate over U.S. foreign policy into a theological battle.”

So, in an attempt to shine light on the dissonance between Jesus’ message of peace and the violence inflicted upon Palestinians in Gaza, as well as the destructive consequences of moving the embassy, CMEP and partners gathered to pray.

“We hoped that by organizing a multifaith prayer with Jews, Christians, and Muslims we would be countering the myth that this conflict is about clashing religions,” Cannon explained.

The day after CMEP’s prayer vigil, former Fuller Theological Seminary president Richard Mouw published an articlecondemning the “shameful” celebration of the embassy’s opening. “God is not indiscriminate in handing out blessings to Israel,” Mouw wrote. While Jeffress and Hagee rejoiced in what they believe to be the eternal theological significance of the new embassy, Mouw was clear and critical: The biblical prophets “never called for an uncritical acceptance of whatever happened to be the current policies and practices of Israel’s leaders.”

A movement is building among justice-minded evangelicals. To them, the suffering of Palestinian civilians, including many siblings in Christ and those from diverse theological and faith traditions, demands accountability regarding the Israeli occupation and government. And this movement has gathered traction in recent years among young evangelical Christians who say figures like Hagee and Jeffress do not speak for them.

This critical eye toward the actions of the Israeli state and Christian Zionism extends to the treatment of Palestinians. Two thirds of younger evangelicals say that Christians need to do more to care for Palestinians, while just 54 percent of those 65 and older would agree.

Many of these younger Christians describe their passion for justice as having been awakened through direct contact and relationship building with Palestinians and Israelis.

“I went home reeling,” said Teresa Casale, a member of Washington, D.C.’s interdenominational National Community Church (NCC), whose first experience in the Holy Land was as a young Christian. “I traveled throughout the West Bank and went into the Gaza Strip. What I saw was a vibrant society of beautiful people who were suffering immensely under oppression and occupation.”

Casale has leveraged this sense of injustice and desire for peace into further action in the DC area by leading trips through NCC and the Telos Group, a U.S.-based organization that facilitates multinarrative educational pilgrimages to the Holy Land.

For Sara Burback of D.C.’s Christ City Church, a personal “faith as a Christian with a Jewish background” led to her increasingly questioning “the disconnect between the evangelical American church” and the Palestinian church.

“I had been raised to accept Israel as God’s fulfillment of biblical prophecy,” she said, but that perspective began to change as a result of interaction with Jewish-American peace activism and exposure to Palestinian voices. Burback followed this calling into leadership of a seminar in her home congregation on peace-building and the Israeli/Palestinian conflict.

This group and others like it, she notes, are “much more open” than older evangelicals “in terms of opening the discussion to include the Palestinian narrative and being willing to examine previously held positions of support.

“I think the binary arguments and positions are unsatisfying to us, and we are traveling to the grey areas in discussions and narratives to wrestle with what our call to be peacemakers means,” said Burback.

For Steve Graybill, who has participated in or led several dual-narrative trips to the Holy Land through NCC and the Telos Group, educating other Christians about the realities of the occupation and conflict is an integral part of preaching the gospel.

“My number one goal in helping to facilitate trips to Israel/Palestine,” he said, is “to provide an opportunity for people to also ‘come and see’ what life is like” for those suffering from conflict and those “amazing people… who are working toward creating a different reality there.”

Casale agrees. It is hard for evangelical Christians to understand the important modern context of the Holy Land “until you see and feel that for yourself,” she said. “Many Christians operate under the assumption that this conflict has been going on for ‘thousands of years.’

“The reality is that this current situation has existed for decades, not centuries, and it is solvable. The land of the Bible is a living, breathing place that exists now. It is not frozen in time in the era of our Sunday school stories. Real people live real lives there that are filled with suffering caused by geo-political decisions in which we as Americans are implicated.”

Trips like those organized by the Telos Group walk a fine line: How can U.S. Christians become educated, passionate, and mobilized by the injustices in the Holy Land in person while making sure they are not indulging in “conflict tourism” or using their outsized influence poorly? The answer, according to Telos’ Jordan Wilson, is by centering and elevating the voices and needs of Israeli and Palestinian peacemakers.

“For Americans to support the things that make for peace,” he said, “they need to better understand the complexities of the conflict, to humanize the people who live there, to listen to their stories, and to learn from the peacemakers … These are the people who show us all the way out of intractable conflict by casting vision for a sustainable future built on mutuality.”

For evangelicals invested in peace-building, a tension remains between this kind of relationship building and the type of advocacy and action needed to transform power imbalances. After engaging with the Israeli/Palestinian conflict and other social issues, Graybill said, he “began to see compassion as placing Band-Aids on systems but doing very little to transform” them.

Justice, on the other hand, demands a kind of introspection for these evangelicals — a recognition of the American church’s oversized influence on the conflict.

“We must first recognize that we are part of the problem,” said Wilson. “So we must be part of the solution too.”

While many of these evangelicals became informed about the conflict through relationships made during Holy Land trips, to them it is not sufficient simply to make new friends.

“I like to tell people that your trip really begins when you get back home,” said Graybill. “Their experience as followers of Christ must be stewarded well” and produce action.

For Telos, engagement with the conflict does not stop after a trip, either. “Our trips equip leaders to ‘come and see,’” said Wilson, “but then we are intentional about equipping leaders to ‘go and tell.’”

Especially in recent months, the flexibility of a “pro-Israel, pro-Palestine, pro-Jesus” stance has allowed evangelicals to strongly condemn human rights abuses against Palestinians while still maintaining support for the security and thriving of Israeli Jews.

“We envision a time when both Israelis and Palestinians can enjoy the security, freedom, and dignity all rightly deserve, but we cannot pretend to support the mutual flourishing of both when one side lacks even hope for dignity,” said Wilson.

Recent escalations on the part of the Trump and Netanyahu administrations, including the embassy move; increased settlement construction; defunding of UNRWA; and killings of civilians such as nurse Razan al-Najjar in Gaza have not gone unnoticed among these evangelicals.

The recent “crimes against humanity have caused more conservative organizations including evangelicals to speak and write more boldly,” observed Tom Getman, former director of World Vision programs in Jerusalem, West Bank, and Gaza. Evangelical institutions have amplified their advocacy for justice and condemnation of the Israeli government’s actions without fear of losing the support of more conservative donors and partners.

“My view has always been that if we tell the truth with compassion for both parties ensnared by the conflict more people will understand and even give more generously, not withdraw support,” said Getman.

No matter how universal their call for human flourishing, dignity, and experience of God’s love, though, all of these Christians note the very real cost of advocating for justice for the Palestinian people. Dana Staley, an attendee at nondenominational Christ City Church, has experienced firsthand the hostility and erasure exhibited by “Christians who often feel that the Zionist agenda is synonymous with Christianity.”

“My ancestral family members are Palestinian Christians,” she said, but “my whole life I grew up hearing from the church the story of modern-day Israel. I know that side. I’m only now learning about the true heartache of my family’s story.”

And as she’s raised her voice louder on behalf of people like her family, not every community has responded positively. At her alma mater, an evangelical Christian institution, she “was often confronted by students who thought Palestinians were only terrorists and would challenge” her understanding of biblical texts.

Decades earlier, Getman and his family also experienced this rejection when advocating for justice in Israel/Palestine. “Before we lived in the land of Christ and worked in World Vision,” he said, “people left our church or refused our friendship when we made comparisons with the situation in apartheid South Africa.”

But like others described here, Getman’s advocacy was born of powerful personal experience and could not be given up. He, along with other activist leaders, had received a charge from Archbishop Desmond Tutu in 1989 to “turn your eyes to the Palestinians” after the decades-long battle against apartheid.

That success and powerful movement continue to fuel Getman, in the same way that other, younger Christians draw strength from the ongoing work by Palestinian and Israeli advocates. As Getman puts it: “The long road to freedom may not come in my lifetime or even with my small efforts, but I can look forward with hope that the present corrupt leaders of the world are not going to have the last word.”