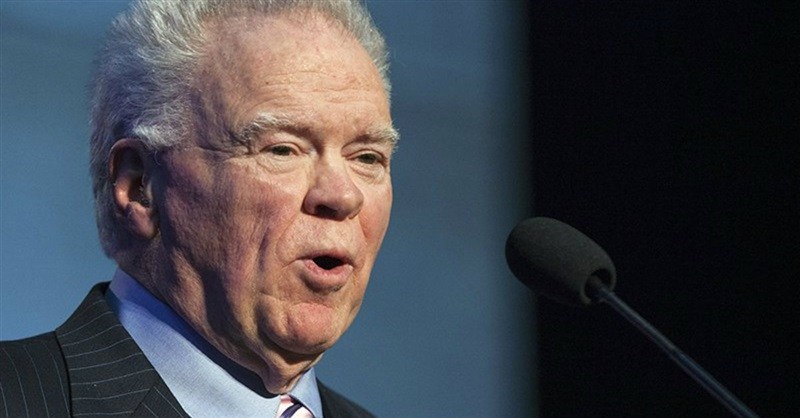 Patterson was ousted as president of the Southwestern Baptist Seminary in May over allegations of sexism, condoning spousal abuse, and mishandling rape allegations. Months later, the embattled evangelical leader has made opposition to #MeToo a feature of his public life.

As he returned to public ministry last month, Patterson criticized the #MeToo movement in his sermons, urging his listeners to remember, “I have nothing good to say about a woman who falsely accuses a man. She runs the risk of ruining a life.” He also focused his sermons on a story in the book of Genesis in which Joseph is the subject of false rape allegations by the wife of the palace guard.

Now he’s teaching a class on ethics. Last week, Patterson announced that he would co-teach Christian Ethics: The Bible and Moral Issues, a weeklong class at the conservative Southern Evangelical Seminary alongside its president Richard Land.

Land defended Patterson’s role to the Religion News Service, saying “Dr. Patterson’s one of the most significant figures in evangelicalism in the last 20 years … I believe he’s an asset to evangelicalism and we’re looking forward to it.” Neither Land nor a representative for Patterson returned a request from Vox for further comment.

Patterson’s return to public ministry, and decision to immediately use his platform to criticize #MeToo, suggests that he’s not looking for redemption so much as justification. Likewise striking is his decision to teach alongside Land, a famously hardline conservative who is a member of Donald Trump’s unofficial evangelical advisory council.

Land was forced to resign from his position as the president of the Southern Baptist Convention’s Ethics and Religious Liberty Commission in 2012 after making racially loaded comments about then-President Barack Obama using the death of Trayvon Martin to “gin up the black vote.” Choosing Land’s institution as his “comeback vehicle” of choice suggests that Patterson may be trying to make a statement about his political and ideological allegiance in the post-#MeToo cultural landscape.

Richard Mouw, president of Fuller Theological Seminary in California and a longtime commentator on evangelical affairs, agreed. He pointed out to me that Patterson is not an academic specialist in ethics, making him an unconventional choice for the class to begin with.

“It’s not surprising that this school, which is representative of the most conservative views, headed up by a president who lost his denominational position over comments that struck many people within the Southern Baptist Convention as racist, would [hire] Patterson.” The purpose, Mouw argued, was “a political statement. ‘He’s one of us. We want to keep his voice strong. He speaks for us. He speaks on our behalf.’”

Evangelicals have also contended with #MeToo — with varying degrees of success
Patterson is not the only evangelical figure confronted by #MeToo. Pastor Bill Hybels, the founder and figurehead of the popular, “seeker-sensitive” Willow Creek Church outside Chicago stepped down over numerous allegations that he had sexually harassed church employees during his tenure there. Another pastor, Andy Savage, resigned from his Tennessee megachurch over allegations that he had assaulted a minor while serving as a youth pastor in Texas decades prior.

But because Patterson’s offenses are arguably less severe — he has not been accused of sexual misconduct himself — he seems to have become a much more politicized figure. Patterson is a Rorschach test for evangelicals’ views on #MeToo. He is accused of encouraging rape victims not to come forward, of telling spousal abuse victims to stay with their partners, and using sexual language to describe teenage girls in his sermons. To his critics, he is a proponent of decades’ worth of toxic patriarchal attitudes, exactly what the evangelical community needs to move away from.

But to his defenders, like the group of 16 Southwestern Baptist Seminary donors who threatened to withhold funds from the school over Patterson’s ousting, he’s a victim of political correctness gone wild. As one petition in support of Patterson back in May put it, “The wrong thing is to now bow to the culture warriors, for the sake of political correctness at the expense of the glory of the Gospel.”

Katelyn Beaty, a writer and editor who focuses on evangelical issues, told me that, while evangelical women are increasingly open to the ideas of #MeToo, Patterson’s resistance to it is representative of a wider pattern. “Among many evangelical men, I see two things: either silence, or a tepid openness. For a lot of men, #MeToo seems like a ‘women’s problem’ rather than a problem implicating men … And definitely given the political bent of many of the drivers of the #MeToo movement, many evangelical men are turned off by that branding or just don’t see its relevance to the church or ministry.”

She also noted how Land and Patterson’s longstanding friendship was a reflection of a wider issue of sexism in the evangelical world, the way in which the “boys’ club” informs the transfer of power in the evangelical world. “In many institutions, power is accrued and passed on largely through informal networks of relationships and friendships between men. That dynamic is especially strong in more traditional Southern Baptist networks where women don’t have many formal positions of power and even still have to fight to be heard when they do have formal positions of influence. It’s the good ole boys club with a spiritual veneer of ‘brotherhood.’”

Through his actions and words alike, Patterson and his allies are taking an oppositional stance on #MeToo
Patterson’s return to public ministry should be understood in the light of that conflict. While he offered a pro forma apology for insensitive language at the time of his retirement, he’s nevertheless consistently defended the narrative that he is a victim of over-zealous social justice warriors. Even when he apologized for his word choice, he made sure to add, “I do not apologize for my stand for the family and for seeking to mend a marriage through forgiveness rather than divorce.”

Since his retirement, furthermore, Patterson has consistently positioned himself as an oppositional, rather than rehabilitated, figure. His choice to center his first public sermon since leaving Southwestern on false rape accusations and his decision to teach an ethics class alongside Richard Land both suggest that Patterson is embracing his newfound status as a martyr of the culture wars.

And, even in the aftermath of #MeToo, plenty of white evangelicals will follow him. After all, only last week, a Marist poll found that a full 48 percent of white evangelicals would support then-Supreme Court nominee Brett Kavanaugh, even if the numerous sexual assault allegations against him were found to be true.

For all too many white evangelicals, the language and rhetoric around #MeToo have become so politicized that any encroachment on the power of men to control women’s bodies and boundaries is seen as suspiciously “liberal” or “secular.” In such a context, a man like Patterson can develop a robust political identity out of his refusal to apologize for counseling rape victims and spousal abuse victims to minimize their tragedy. Even if it’s women who pay the price.

Psalm 3.5
I laid me down and slept; I awaked; for the Lord sustained me..
King James Version 1611, American Edition