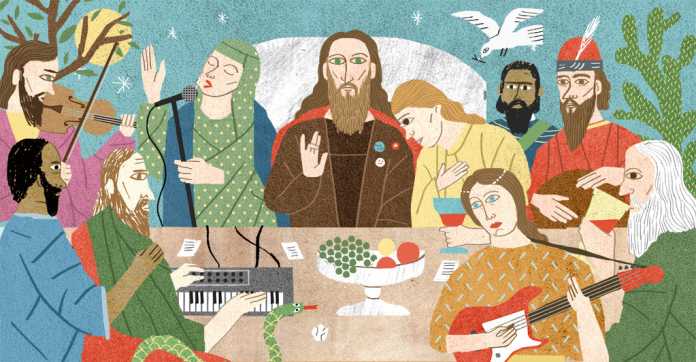 Inside the Hammerstein Ballroom’s great double doors, beyond the metal gates and metal detectors, the three-story music venue’s lights are turned down, the stage empty. A few people mill about, and to their left is a merchandise table branded as a “welcome lounge” selling T-shirts and CDs and soft-covered books. The sound booth has four technicians and two big cameras for the ground floor alone. Ten hours earlier, the stage was occupied by holographic Japanese pop star Hatsune Miku, the three balconies and large pit filled with her fans. But it’s morning now, the floor’s no longer sticky, and the event taking place isn’t a concert — it’s church.

Hillsong is one of the largest evangelical Christian churches in the world. What began as a small pentecostal church in a suburb of Sydney now holds services on all six habitable continents, with 30 locations and more than 80 affiliated campuses. More than 100,000 people are estimated to attend Hillsong church services every week, including Justin Bieber, Selena Gomez, Nick Jonas, and the Jenner sisters. According to the church, for every person attending in person three more watch online.

The worship band at the Hammerstein — Hillsong’s Manhattan campus — isn’t huge. A man plays a guitar and a woman sings lead, along with a bassist, a drummer, four backing vocalists, and a choir of about 15 people at the back of the stage. They play four songs before a local pastor appears with long curly hair, a sleeve of tattoos, and a Hawaiian shirt. “This is not Christian karaoke,” he jokes. “I know the words are on the screen, but that’s not what we’re doing here.” This is a time of worship, a church service — not, I repeat, a concert.

I grew up in a Texas megachurch that played songs written by Hillsong members every Sunday. I didn’t know they were written in Australia. I don’t think I even realized they had been written in my lifetime. Hillsong songs like “Shout to the Lord” and “Everyday” were my hymns, as fundamental to my understanding of music as “Mary Had a Little Lamb” and “The Star-Spangled Banner.” These are not just Christian rock songs — they are worship, and for millions of people around the globe, they are an inseparable piece of Christian life.

But I don’t know any of the songs we sing at Hammerstein. More than half the time I spent in Hillsong’s Sunday service in July was spent singing, but each song was no more than two years old, the product of a constantly producing musical focus — no hymnal or gentle playing of “Come Thou Fount.” Every Hillsong service plays songs produced in-house by one of the church’s three different musical entities: Hillsong Worship, for church services; the touring act Hillsong United; and the youth-focused Young & Free. All three are nestled under the church’s Hillsong Music label.

Hillsong’s three bands in their various formations have produced almost 100 albums. Their songs are sung by an estimated 50 million people across denominations and countries each week, and in January 2018, they won their first Grammy. According to data given to The FADER by Nielsen, songs written by the three Hillsong bands have been streamed on-demand more than 760 million times since December 29, 2017. For comparison, over the same time period, that’s only 10 million fewer than Justin Bieber.

“Hillsong is just this massive, massive presence in Christian music,” says ethnomusicologist Tom Wagner, who wrote the book The Hillsong Movement Examined. “There’s nobody with as much influence as they have, and even as someone who doesn’t believe what they believe, it is absolutely incredible the work that they are doing. They’ve just kind of taken over.”

Hillsong are the biggest band you’ve never listened to, but the people making these songs sung by millions of people each week aren’t living a rock-and-roll lifestyle by any means.

The Hillsong church actually takes its name from the music it produces. “The church was called Hills Christian Life Centre, and Hillsong was originally the name of our music,” senior pastor Brian Houston explained in a 2007 episode of public-access docuseries Australian Story. “But people used to talk about ‘that Hillsong Church,’ and the name Hillsong actually became famous around the world.”

“I didn’t realize Hillsong was an actual church until I came to New York City,” Kayla Rose, a 23-year-old freelance publicist who now volunteers on the Hillsong social media team, told me. “Music is an important part of church life for me […] it’s really easy for me to hear and connect with a message conveyed in a song.”

The Pentecostal denomination Hillsong belongs to was the first to introduce an accelerated tempo to Christian music in the 1950s, so it makes sense that Hillsong became a leader of the genre’s sound. Founded in 1983, Hillsong initially convened in a high school; music pastor Geoff Bullock wrote most of the church’s early worship music, songs with big ’80s pop production but religiously focused lyrics. In 1986, the church hosted its first worship music conference, titled Hillsong; their first album, Spirit and Truth, was released in 1988.

That same year, Bullock was joined by vocalist, Darlene Zschech, a former Australian television star; in the early ’90s, David Moyse of soft-rockers Air Supply began playing guitar on Hillsong albums. The band’s albums were delivered on Sundays, and they needed lighting directors and floor managers, a tech manager, and section leaders — in other words, personnel to run a full-blown concert.

“Hillsong has done for Christian music what the Dixie Chicks did for country and western: made it blond, sexy, and mainstream,” Tanya Levin wrote in her the book People in Glass Houses: An Insider’s Story of Life In and Out of Hillsong.

In 1995, Hillsong faced its first crisis: Bullock’s marriage broke down, he got remarried, and resigned. By then, the church had a congregation of about 3,000 people; youth pastor Donna Crouch stepped into Bullock’s former role, while Darlene Zschech became Worship pastor. Instead of faltering, however, they thrived. That November, Hillsong Worship released the live album Shout to the Lord, which peaked at #13 on the Billboard Top Contemporary Christian Artist Chart. The album’s reach was partially due to their partnership with publisher Integrity Music, which began distributing Hillsong products in the United States; Shout to the Lord‘s title track is still sung in an estimated 30 million churches each week.

Darlene Zschech was a high-profile and talented musician who spurred endless copycats; women stood at the forefront of church stages raising their hands and gripping them back into fists on the beat just like she did. The songs were piano-driven, with Zschech’s vocals at the forefront — similar to popular female pop singer-songwriters of the era like Sarah McLachlan. “When church historians reflect on the worship revolution that happened around the turn of the 21st century, Darlene Zschech will be credited for playing a major role,” said Bill Hybels, the American pastor of Willow Creek church, in a blurb on the back of a 2001 album.

“Hillsong is different than anything church music had experienced before.” Dr. Michael Hawn, a professor of church music at Southern Methodist University, told me. “Usually you had a style of music that would last for two generations. With Hillsong, we’ve had three major shifts in musical style in 15 years. That’s just unheard of in the history of church music.”

In 1998, Reuben Morgan was appointed as youth director and helped create Hillsong United; the next year, a deal with Warner Music Australia distributed Hillsong albums in big-box stores around the world, beyond Christian stores and conferences. The ’90s were the decade of Christian artists like Jars of Clay and Caedmon’s Call, when dcTalk songs charted on the Billboard Charts. While Hillsong United’s songs weren’t as gritty or rock-focused as some of that music, they were still a part of the moment when songs about Jesus could crossover into the Top 40 easily. In 2001, the church changed its name officially to Hillsong.

“Hillsong has done for Christian music what the Dixie Chicks did for country and western: made it blond, sexy, and mainstream.” —Tanya Levin

100.3 The Sound Signing Off As Station Goes From Classic To Christian Rock

Psalm 49.20
Man that is in honor, and understandeth not, is like the beasts that perish..
King James Version 1611, American Edition