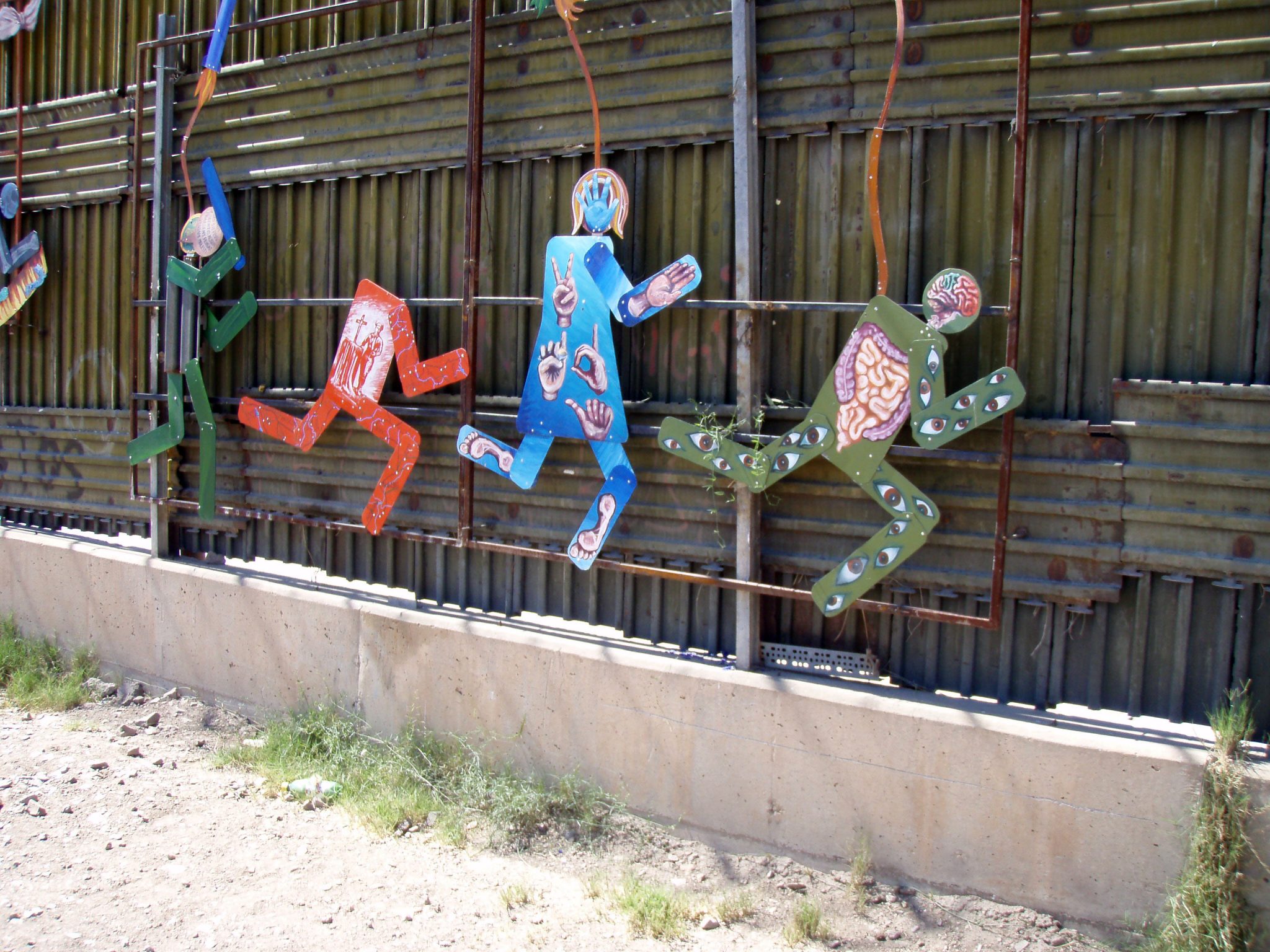 President Donald Trump is trying to fool evangelicals like me. This time, it’s using a false threat of an invasion from a “caravan” of poor people marching through Mexico to seek asylum legally. It should be obvious to everyone. But it isn’t — research shows that evangelicals tend to have strong political opinions when it comes to immigration, so they are distinctly open to this fear-driven message.

I’m a professor, pastor, and writer who serves at the flagship school of institutional evangelicalism, Wheaton College. I’ve spoken and researched the topic of evangelicals and immigration for five years, due to my concern about how this community seems to reject their deeply held values when it comes to welcoming refugees into our country. As I’ve seen the anti-immigration fervor rise among evangelicals, I’ve hosted an evangelical leaders summitand rallied evangelicals to the engage on these issues.

The Billy Graham Center at Wheaton College, where I currently work, partnered with LifeWay Research in May 2018 to poll 3,000 Americans about their voting in the most recent national election. The purpose was to understand evangelical voting patterns. We found, as other research projects support, that white evangelicals are highly motivated to support President Donald Trump around the issue of immigration. As his rhetoric around the caravan shows, President Trump clearly knows this.

As evangelicals prepare to vote, we need to consider how this messaging has found purchase in our pews and, more importantly, how our faith calls us to respond. It makes little of the depth of God’s love for us in Christ by teaching us that our love for others is conditioned by country, race, or ethnicity. Regardless of political affiliation and positions, evangelicals need to see this culture of fear of others for what it is: un-Christian.

Before I dive into the research, it’s important to explain how we determined the evangelical label in our surveys.

Evangelicalism is one the poorest defined political and religious terms, yet is ubiquitous today. One reason for this is a lack of consensus among pollsters as to how to determine and measure evangelicals. Today, many pollsters rely on combinations of self-identification, belief, denomination, or race as drivers of evangelical identity. The patchwork nature of the label means that many journalists and pundits are often working off different definitions.

In an effort to balance these different approaches, our study surveyed evangelicals by belief and by self-identification. To determine if they fit the profile of evangelical by belief, they had to “strongly agree” with four separate statements:

1. The Bible is the highest authority for what I believe.

2. It is very important for me personally to encourage non-Christians to trust Jesus Christ as their Savior.

3. Jesus Christ’s death on the cross is the only sacrifice that could remove the penalty of my sin.

4. Only those who trust in Jesus Christ alone as their Savior receive God’s free gift of eternal salvation.

Using these constructs, we found that for evangelicals, immigration was a major factor in voting for Donald Trump in 2016. Sixty-two percent of evangelicals who voted for Trump listed immigration as one reason for their vote; 15 percent saying it was the single most important factor.

We then asked these evangelicals what they thought of the Trump administration’s actions on immigration since he took office. We found that two out of three evangelicals said they support the Trump administration’s efforts to reduce illegal immigration, while 63 percent support recent reductions in the number of legal immigrants to the United States.

However, we found the most significant splits within evangelical responses on these questions when we broke it down by race and ethnicity. White evangelicals overwhelmingly back more hardline positions on immigration, with three-fourths wanting a reduction in legal immigration and 82 percent supporting the administration’s efforts on illegal immigration.

But few evangelical people of color agreed. Only one-third of African-American evangelicals and half of Hispanics supported reductions in legal immigration, with slightly smaller percentages supporting the administration’s efforts on illegal immigration — 35 and 47 percent respectively.

It is hard not to conclude that far too many white evangelicals are motivated by racial anxiety and xenophobia compared to evangelicals of color. More research certainly is needed, but undoubtedly white evangelicals would do well to turn off cable news and listen to their sisters and brothers in the increasingly diverse pews of evangelical churches for a different view.

First, the Christian faith demands we love immigrants and refugees.

These numbers tell me is that many evangelicals are not particularly good at loving strangers, aliens, and pilgrims. Yet throughout scripture we find this value is a central pillar of the Christian faith. In what Christians call the Old Testament, God places hospitality and protection of foreigners at the core of Israel’s ethical identity.

Notice this commandment is conditioned by Israel’s history: They were to welcome the foreigner because they too had been foreigners in a strange land. This same conditional theme is picked up in the New Testament, this time in relation to how Christians are supposed to live in light of Christ’s love for us. At its most basic level we are called to love others unconditionally and sacrificially because Christ first loved us in the same way.

Political and media narratives tell you that distrusting, fearing, or even hating immigrants and refugees is a justified feeling. But scripture calls us to see ourselves in the immigrant and to love others as Christ first loved us.

Second, evangelicals need to be taught to love the stranger

Despite this “loving your neighbor” phrase, people do not naturally love the stranger. They do not naturally open their homes, their dinner tables, their churches, and, yes, their countries to others. We have an instinct to hoard, to protect what we have, and to insist others go find their own security and provisions.

More to the point, it is hard for American Christians to grasp the depth of suffering in the world when the grocery store is fully stocked and the emergency room is just down the road for many of us. This is not to say there are not real challenges and real needs in our country. Yet, within our bubble of American evangelicalism, we often lose sight of how much suffering there is in the world.

But teaching people to love and show hospitality toward immigrants and refugees isn’t just about getting our own house in order — we must fight the counter-narratives at work both in and out of the church.

We live in a culture where many political and religious leaders are teaching believers to fear the stranger. What is clear from the data is that this counter-discipling narrative is winning in the church, particularly among white evangelicals.

One recent infamous example was the Fox News guest who claimed immigrants in the caravan traveling through Mexico was carrying leprosy, smallpox, and tuberculosis and were going to “infect our people in the United States.” Despite having no evidence of this claim — and the fact that the last known case of smallpox was in Somalia in 1977 — this claim was given airtime on a major news network. These kinds of reports are not simply false but designed to provoke animosity, leading audiences in a culture of fear toward these people.

In other words, Christians are being conditioned to see threats where we would otherwise see suffering and a window to preach the gospel; to trade-in our gospel mission for a false sense of personal security.

I have been, along with many other evangelical leaders, a strong proponent of US immigration reform. The system as currently constituted is not working and needs to be addressed. But too often politicians seem more interested in using immigration as a means of galvanizing their base and demonizing their opponents than actually coming up with solutions.

When I and other evangelicals speak up on the importance of opening our arms to refugees and immigrants, I get a flood of complaints about open borders and references to George Soros. In emails and on social media, Christians whose profiles lead with tags such as “sinner redeemed by grace,” unleash anger that often surprises me.

My views — like many evangelical leaders who are part of the Evangelical Immigration Table— have more in common with former President George W. Bush’s views than George Soros’s. But in today’s world, Bush is often painted as an immigration radical by my fellow evangelicals.

Furthermore, Christians need to be careful of those who misuse Romans 13:1-4, a passage that tells Christians to live in a way that is respectful and honoring toward our governing authority, while recognizing that God is sovereign over kings and presidents.

It is not, however, a trump card for letting the government do whatever it wants. The government exists under God’s authority and is subject to God’s moral law and is not entitled to our unquestioned fealty. This passage has long been used to justify immoral, un-Christian policies under the guise of the government protecting its citizens. But it is a misunderstanding of the passage.

How then shall we live?

In future generations, I think our evangelical heirs will look back in disappointment upon our response to the refugee crisis of our time. How could we have seen the suffering, heard the cries of anguish, and done so little? For evangelicals living today it is easy to look back and say we would have fought slavery or marched along with civil rights leaders. It is altogether harder to actually make those sacrifices today in the face of suffering.

If this is indeed the “election of the caravan,” my prayer is that evangelicals will recognize the opportunity it affords us to speak about how these refugees are made in the image of God. As Christians, we should be driven by compassion for those men, women, and children. And, as Americans, we should value a system that treats them fairly, in accordance with just laws.

I suspect that Christians will wake up this Wednesday morning and the so-called dangerous, filthy caravan of invading barbarian criminals will suddenly be gone from the political coverage. Oh, the asylum seekers will still be there. But the ads, the campaign speeches, and the tweets trying to stoke fears will magically disappear when polls close.

And white evangelical Christians will be able to go back to their lives, safe once again. That is, until politicians need us to be afraid again. There will always be another caravan, another group of marginalized or suffering people.

Our evangelical witness would be in a better place if we were less easily fooled.

Psalm 32.2
Blessed is the man unto whom the Lord imputeth not iniquity, and in whose spirit there is no guile..
King James Version 1611, American Edition