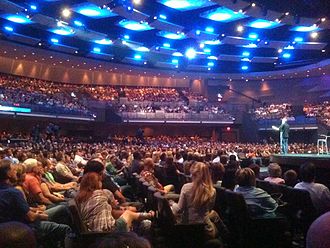 Apparently, the Baptist and Pentecostal and non-denominational Christian faithful turned out to vote Republican in disproportionate droves. As Faith and Freedom Coalition chairman Ralph Reed, who’s in the business of boosting evangelical turnout, told a National Press Club audience, “We had an astonishing level of evangelical voters cast their ballots.”

But appearances can be deceiving, and in this case they are. That’s because a lot of the voters identified as white evangelicals weren’t Baptists, Pentecostals and non-denominational Christians. They were mainline Protestants and Catholics.

Here’s how I know this.

By contrast, the exit polls simply ask voters whether they consider themselves evangelical or born-again Christians, then cross-tabulate the result with a question about race. That’s how they came up with 26 percent for the proportion of white evangelicals in last week’s electorate.

Now, 10 years ago I was involved in designing the third American Religious Identification Survey, conducted by my colleagues Barry Kosmin and Ariela Keysar. We decided to cross-tabulate the evangelical question with denominational responses and lo and behold, we found that 38.6 percent of mainline Protestants and 18.4 percent of Catholics identified as “born again or evangelical.” In other words, “white evangelical” is an exit poll category that includes big chunks of “non-evangelical” religious groupings.

That a lot of mainline Protestants (a largely white community) would consider themselves evangelical was not particularly surprising. Especially in the South, there are plenty of Presbyterians and Methodists and even Episcopalians who look and quack like evangelicals (cf. George W. Bush).

The Catholic number did take us aback, not least because almost the same proportion of white Catholics subscribed to the evangelical category as Hispanic Catholics. (Presumably, some white members of non-evangelical bodies in our “Other Christian Groups” category also identified as evangelical.)

All in all, there’s no reason to think that this situation has changed since 2008. By my back-of-the-envelope calculation, one-third of the “white evangelicals” who voted last week were not evangelicals in the denominational sense. And that covers most of the gap between PRRI’s number of white evangelicals and the exit polls’.

We could have a good argument about how many “white evangelical” voters were not reallyevangelicals. What’s inarguable is that white evangelicals shouldn’t be seen as punching way above their weight at the ballot box. At 26 percent, they turned out to vote at just about their proportion of the population.

Psalm 26.9
Gather not my soul with sinners, nor my life with bloody men.
King James Version 1611, American Edition