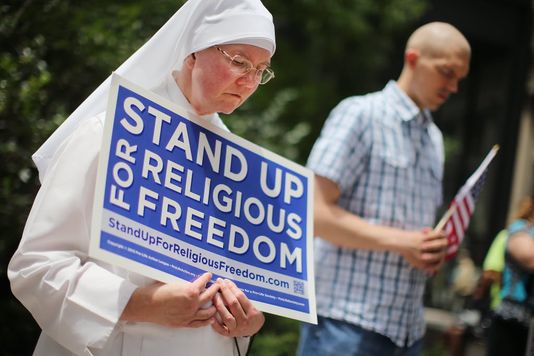 In the turbulent 1960s, John Courtney Murray famously reminded Americans that the Constitution begins with “we the, people,” not “we, the tribe.”

Murray, a Jesuit priest, wasn’t papering over differences that are often deep and abiding. Each of us has our tribe — Catholic, Hindu, Humanist, Jewish, Muslim, Protestant or one of a hundred others in the pluralistic society we all call home. Differences matter.

Instead, Murray was calling on Americans to recognize what we share across our religious and philosophical divides, especially the core principles of religious liberty in the First Amendment: “Congress shall make no law respecting an establishment of religion, or prohibiting the free exercise thereof.”

In just 16 words, our framers created an arrangement in religious freedom that has made today’s pluralism possible. More than any other provision of the Constitution, the religious liberty clauses are the “unum” in “e pluribus unum” — out of many, one.

It’s time to renew our support of First Amendment

In this divided, dangerous moment in our history, it is time to renew our support for the framework of liberty provided by the First Amendment. That’s why on Thursday, American leaders from many different faiths and beliefs will sign the American Charter of Freedom of Religion and Conscience, a reaffirmation of religious liberty in our time.

Signers range from Leith Anderson of the National Association of Evangelicals, to Sayyid Syeed of the Islamic Society of North America, to Suhag Shukla of the Hindu American Foundation, to Rabbi Jack Moline of the Interfaith Alliance, among many others.

Signers of the charter do not agree on how to resolve the disputes over religious freedom we face in the country today. We have a long history of battling over exactly how to define and apply constitutional principles. But the signers do agree that the First Amendment arrangement of “no establishment” and “free exercise” provide the civic framework of religious freedom that allows us to live together with our deepest differences.

The American Charter reminds us that freedom from state establishment of religion prevents “confusions of religion and government and, in so doing, protects freedom of religion and conscience for all.” By separating church from state, the United States rejects “state-enforced orthodoxies of any kind.”

The free exercise of religion, the charter states, “encompasses the right, as conscience dictates, to speak and act on the basis of ultimate beliefs in private and public life, as well as the right to question religious truths or not to believe them at all.”

Signers of the charter recognize, of course, that there must be limits on the free exercise of religion. But they agree that “any substantial burden on the freedom of religion must be justified by a compelling governmental interest, and that the means chosen for serving that interest must be the least restrictive of freedom of religion.”

To cite a simple and familiar example: Yes, public schools have a compelling interest in teaching students to read. But that interest might not extend to requiring a student to read a particular book over the religious objections of a family if an alternative can be assigned. Or consider that many public schools have policies prohibiting students from wearing head coverings, primarily to keep gang symbols out of school. While banning gang colors is a compelling interest, what happens to the Jewish boy or Muslim girl required by faith to cover their head? To protect the right of conscience, schools routinely provide religious exemptions.

In other words, government has a First Amendment mandate to take claims of conscience seriously and then to balance societal interests and religious freedom to determine whether and when such claims can be accommodated.

Religious freedom is a hallmark of America

Protecting religious freedom in a diverse society isn’t easy — and it often stirs debate. As early as the Revolutionary War, accommodations were made for Quakers who for reasons of conscience were unwilling to take up arms against the British.

Then and now, debates over religious accommodations are complex and contentious, as the signers of the American Charter readily acknowledge. Americans are engaged in bitter debates over the relationship between claims of conscience and other fundamental rights such as equal protection, as in cases involving vendors and same-sex weddings.

The signers of the charter have differing views on how these disputes should be resolved, but we do agree that “all parties should have the right to participate in these debates on the basis of full equality.”

At this crossroads in our history, it is worth recalling that what it means to be an American is not determined by religion or kinship, but by adherence to the principles and ideals set forth in our founding documents. First among these ideals is freedom of religion and conscience, not only for our own tribe but also for people of all faiths and beliefs.

The American Charter is an urgent and timely reminder that only by standing together, as We the People to reaffirm our shared commitment to religious liberty for all, will we preserve and expand this lively experiment for generations to come. Without religious freedom, there is no America.

Psalm 73.1
Truly God is good to Israel, even to such as are of a clean heart..
King James Version 1611, American Edition