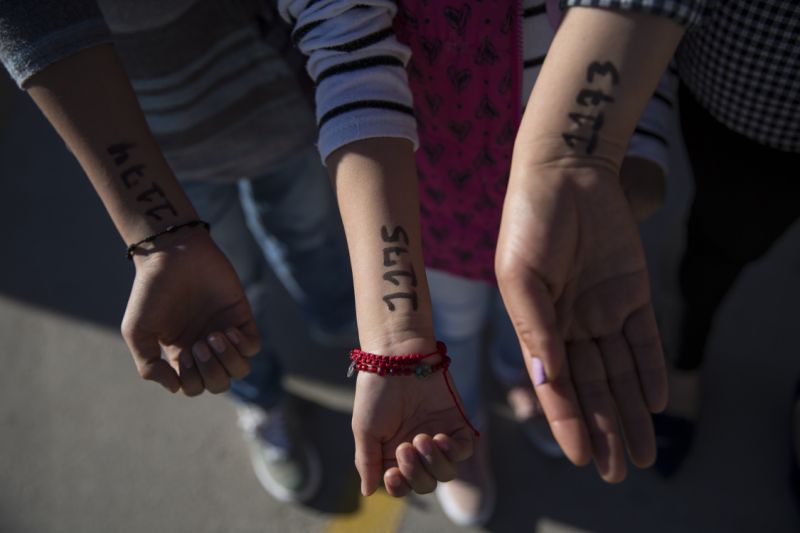 Less than a week after a photograph of migrants fleeing tear gas at the U.S.-Mexico border attracted attention online, another image captured at a different port of entry stirred unpleasant historical references.

The latter photograph, depicting three migrants with numbers written on their forearms, was published as part of a 30 November 2018 report by Yahoo News on migrants seeking asylum at the El Paso, Texas, border crossing.

Yahoo News' @CEDickson reports from Juarez, Mexico, where migrants seeking asylum are given a number — written on their arms — and sent away to wait. https://t.co/MveJUSAf94

While the photograph is legitimate, it is unclear exactly who wrote the numbers on these people’s arms, with Yahoo reporting that:

According to various advocates and others who observed the situation on the bridges over the summer, it was volunteers with the Mexican Red Cross who first created a waiting list to help maintain order within the encampments as asylum seekers waited for their turn to cross. The list was then transferred to the Casa del Migrante along with the asylum seekers when they were forced to move there in November. Accounts vary on when, exactly, and with whom the practice of tracking migrants with numbers on their arms originated, but it has now become a part of the process for all who wish to seek asylum at one of the U.S. ports of entry in El Paso.

At least two Jewish news outlets that picked up Yahoo’s story, remarked in their own reporting that the numbers, while reportedly written in marker, resembled the tattoos forced onto prisoners in 1940s concentration camps

Mormons in Mexico: A brief history of polygamy, cartel violence and faith

In the ‘battle at the border,’ evangelical leaders jostle for Trump-era media relevancy