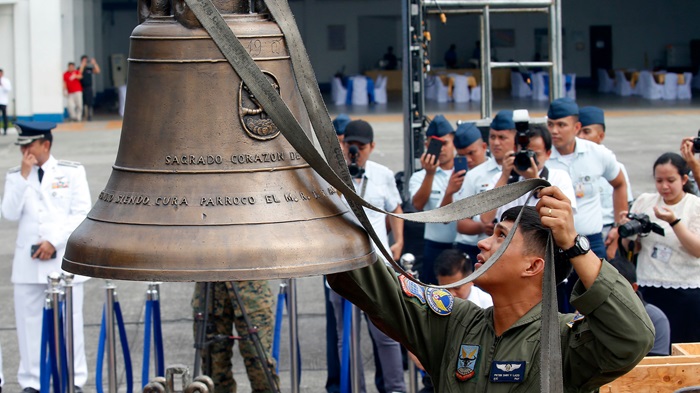 After waiting more than a century for the United States to return a trio of church bells looted during the Philippine-American war, a Catholic parish on the Philippines island of Samar will finally be able to ring them again.

The Balangiga bells were handed over to officials this week and will spend a few days on display at a national museum before making their way home to the Church of San Lorenzo de Martir (St. Lawrence the Martyr), where they originally hung before US forces took them as spoils of war following a 1901 massacre.

The three metal bells, each between 23 inches and 30 inches tall, have taken on meaning as national symbols of freedom and resistance for Filipinos and Catholics, who have petitioned the government for their return since the 1950s.

According to accounts of the Balangiga massacre, Filipino fighters snuck into San Lorenzo in a plot against American troops occupying the small town. They tolled the church bells to signal their attack, which left 48 Americans dead. In a retaliatory strike on the small town, US soldiers killed thousands and claimed the bells from the ruins of the church building.

Those who defended US possession of the bells, including some descendents of servicemen who fought at Balangiga, saw them as instruments of war. They had been kept on military installations—two at a US Air Force base in Cheyenne, Wyoming, and another at a US Army post in South Korea.

Their return, two years after the military gave back another Philippine church bell that used to be on display at West Point, represents the US finally righting a longtime rift with the southeast Asian nation.

“… Church bells belong in churches calling the faithful to worship. They don’t commemorate military deeds,” said retired US Navy Capt. Dennis Wright, who campaigned for the repatriation of all four bells and noted that the US had previously given back bells taken in battle from churches in Japan, Russia, Germany, and elsewhere in Europe.

The Catholic Bishops’ Conference of the Philippines thanked the government for its lobbying to get the bells back on Philippine soil and called their return an “early Christmas present.”

President Rodrigo Duterte had asked the US to “give us back those Balangiga bells” in his state of the union address, and US Defense Secretary James Mattis met with officials from the Philippines this year. Duterte plans to officially hand over the three bells to the priest of San Lorenzo on Saturday.

Bishop Crispin Varquez of Borongan, who leads the local diocese, instructed Catholics to remember the “tragic events of war that occasioned the misuse of the bells by the warring parties.”

“We must express sincere sorrow and repentance for the sins committed, leading to the loss of lives and the destruction of homes and properties,” he said in a statement quoted by Crux. “But we must also forgive. We must seek reconciliation not because it is politically correct, but because it is the demand of the gospel.”

The church’s presence in the islands, now home to the world’s third-largest Catholic population, dates back to 16th-century Spanish regimes, Christian History recounted.

San Lorenzo, the third-century martyr, is the patron saint of Balangiga.

Philippine Archbishop Romulo Valles of Davao said the bells’ return “affords us an opportunity to understand and appreciate history better with a more mature perspective,” according to Crux.

“It also demonstrates that the path to healing and reconciliation may be arduous but is never impossible.”

Bishops: Getting COVID-19 vaccine is ‘act of charity,’ supports the common good

How to Debate an Evangelical on the Eucharist… And Win!

Psalm 22.21
Save me from the lion's mouth: for thou hast heard me from the horns of the unicorns..
King James Version 1611, American Edition