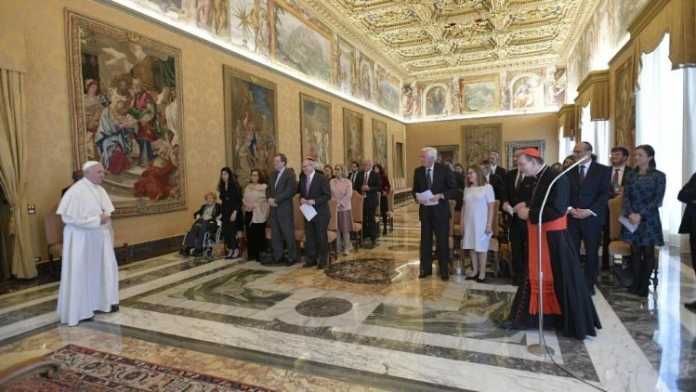 Pope Francis on Friday marked International Women’s Day, stressing the “irreplaceable contribution of women in building a world that can be a home for all,” through their efforts toward peace and love.  “Women make the world beautiful, they protect it and keep it alive.”  “They bring the grace of renewal, the embrace of inclusion, and the courage to give of oneself,” he told some 40 representatives of the American Jewish Committee who met him in the Vatican.

Speaking about the role of women in “making humanity a family”, the Pope said that peace, born of women, “arises and is rekindled by the tenderness of mothers.”  “Thus the dream of peace becomes a reality when we look towards women.”  He said they “dream of love into the world”.  “If we take to heart the importance of the future, if we dream of a future peace, we need to give space to women,” the Pope urged.

The Holy Father also spoke to the American Jewish Committee about the commitment of Jews and Christians “to create a homely and familial environment,” through respect and appreciation for the religion of others”, which he said is “our future.”

The Pope expressed great concern over outbreaks of anti-Semitic attacks in various countries and a “climate of wickedness and fury, in which,” he said, “an excessive and depraved hatred is taking root.”   Such a phenomenon, he said, calls for vigilance warning that even the slightest perceptible forms of anti-Semitism can lead to human tragedies such as the Shoah in which two-thirds of European Jewry were annihilated.

The Pope stressed that any antisemitism on the part of a Christian is a rejection of one’s own origins, a complete contradiction.  He said, “We must not tire of transmitting to children the foundations of love and respect, and we must look at the world with the eyes of a mother, with the gaze of peace.”

An important tool in the fight against hatred and antisemitism, the Pope pointed out, is interreligious dialogue, that aims at promoting a commitment to peace, mutual respect, the protection of life, religious freedom, and the care of creation.

Since Jews and Christians have a common rich spiritual heritage, the Pope said, they can bring about much good together.  At a time when the West is exposed to a ” depersonalizing secularism”, he said, Jews and Christians need to come together and cooperate in making divine love more visible for humanity, and to carry out concrete gestures of closeness to counter the growth of indifference.

Pointing to the indifference of Cain before he killed his brother, Abel, Pope Francis lamented the growing distance today between the many who have little and the few who have much. “We are called to take care of the most vulnerable of our brothers and sisters: the poor, the weak, the sick, children, and the elderly,” he urged.

Pope Francis also underscored the involvement of young people in serving humanity, saying they want to dream and are open to discovering new ideals .  He called for the formation of future generations in Jewish-Christian dialogue saying it is also an effective means of countering violence and opening new paths of peace with all.

Psalm 109.25
I became also a reproach unto them: when they looked upon me they shook their heads..
King James Version 1611, American Edition