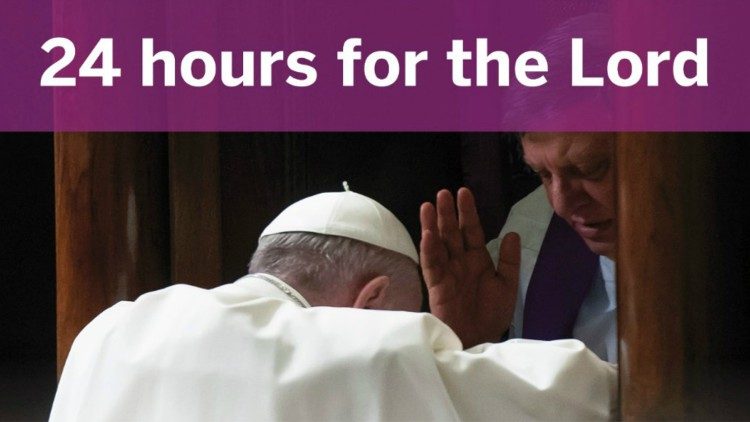 Pope Francis on Friday afternoon is due to preside over the opening of the traditional 24 Hours for the Lord. The penitential celebration will take place in St Peter’s Basilica and has been organized by the Pontifical Council for the Promotion of the New Evangelization.

The theme for this year’s initiative is taken from the Gospel of John: Neither do I condemn you. (Jn 8:11).

The Pontifical Council says that, “On this day, which will be marked by Eucharistic Adoration, individual reflection and an invitation to personal conversion, we are invited to contemplate the image of Jesus who, unlike the crowd which gathers to judge and condemn the woman taken in adultery, offers His infinite mercy as an opportunity for grace and new life.”

The growth of the initiative

“Monsignor Krzysztof Marcjanowicz is an official at the Pontifical Council for the Promotion of the New Evangelization, he said, “We started this because people were asking for the moment of adoration and the moment of peace of a common prayer with the Holy Father and it started actually during the Year of Faith and the feedback from this adoration gave us this input to propose the 24 hours for the Lord, which is basically an initiative based on adoration and confession…”

Mons. Marcjanowicz added that every year he marvels at the number of people who write to the Pontifical Council about the initiative.

The Monsignor emphasized that even if someone has not been to confession for many years and is thinking about participating in the 24 hours for the Lord, they should not be afraid to immerse themselves in God’s mercy. “The merciful Father embraces everyone… and I would encourage everyone to approach the merciful Father and to not be afraid…”

A church in every diocese around the world will be open for 24 consecutive hours as part of the initiative. The Pontifical Council for the Promotion of the New Evangelization has prepared a booklet in a number of languages to accompany those participating in the 24 Hours for the Lord.

Psalm 22.9
But thou art he that took me out of the womb: thou didst make me hope when I was upon my mother's breasts..
King James Version 1611, American Edition