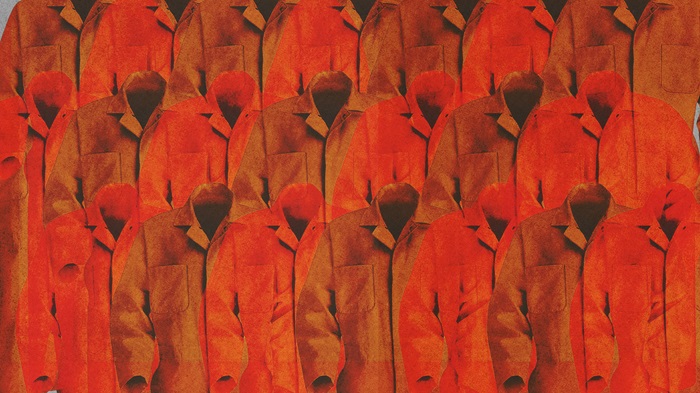 artin Mosebach’s new book, The 21, tells the story of 21 Coptic Christians martyred by Muslim extremists on a Libyan beach in 2015. I finished reading it a day before the horrific terrorist attack by a white nationalist on two mosques in Christchurch, New Zealand.

The echoes between the martyrdoms in Libya and Christchurch are uncanny. In both cases, the perpetrators made a video recording of their violent acts in order to heighten fear and promote their demented vision of purity. In both cases, the victims died because of their faith—and, for many, because they were vulnerable as migrants who had gone to a foreign land to work or make a new life.

In the aftermath of such terror, we often debate the extent to which we should focus attention on the terrorists and their motives. We’re conscious of how excess publicity can spread their destructive ideas and encourage imitators. (The Christchurch terrorist claimed that certain murderous predecessors had precisely this effect on him.) Yet our understandable interest in the perpetrators and desire to counteract what has gone wrong should never drown out our concern the victims, because they deserve our grief. And one way to honor them is by learning their stories and seeking deeper understanding.

This is the approach Mosebach, a German novelist, takes in The 21. In the book’s introduction, he explains he “had no intention to learn anything more of the perpetrators. … It was enough for me to leave them in the darkness they themselves aspired to. … I was significantly more moved by, and motivated to know more about, the fate of the murdered men.”

Contemplating the victims’ humanity makes the tragedy feel heavier. But in a small way, it also makes room for light to shine in, because it affirms that evil and the killers don’t get the final word.

In The 21, Mosebach travels to visit the land, homes, families, and churches of the men killed in Libya by ISIS militants. Their deaths were dramatic: They were marched in orange jumpsuits along a beach, each led by a sword-wielding man dressed in black from head to toe (only their eyes were visible). But their lives, before their martyrdom, had been quiet and unassuming. All but one were migrant workers from Egypt, and they were Coptic Christians by faith. As Mosebach quotes one of their pastors, “These were average young men, completely normal guys. I never would have thought they’d become saints!”

Each chapter starts with a photo of one of the men. Because their lives were so “normal,” there is limited biographical material for Mosebach to recount, which often makes the book seem as much about the author’s journey in a lesser-known (for many of us) branch of Christianity as about the martyrs themselves.

Coptic Christians trace their history back to Mark, one of the four gospel writers. After the Council of Chalcedon in 451, they broke from the Roman Catholic Church on account of disputes over the exact nature of Christ’s humanity and divinity. A few centuries later, their position within Christendom became even more marginalized. Ever since the Arab conquest of Egypt in the 7th century, the Copts have persevered as a minority religion within their nation.

The 21’s strongest chapters take us deep into the lives and churches of these Coptic believers, with Mosebach exhibiting an attention to detail befitting his novelistic gifts. In a chapter called “The Martyr’s Liturgy,” we visit their church and learn about the sanctuary, liturgy, and eucharistic service. We hear that Hany “was friendly and had a kind heart” and that Sameh “gave alms even though he was poor.” When working in Libya, they slept in a single room, side by side on the floor. They sent the money they earned back to their Egyptian families. In the evenings they sang, prayed, and read the Bible, although some could only listen because they were illiterate.

We gain a rich impression of what shaped the lives and faith of these martyrs, and we witness how their martyrdom reverberates to this day through their families, churches, and communities. Their families each have an iPad with the video of their martyrdom. Photos of them as saints are on display in homes and churches.

As we follow along on Mosebach’s journey, we’re given a chance to consider how the martyrs’ gift is twofold: They gave their lives to God, but their lives are also a gift to those left behind, both a source of inspiration and an invitation to reflect on our own lives. They stop me in my tracks, compelling me to ask myself how serious I am about what is ultimately important. I’m inspired to ask what my story tells about experiencing God’s grace and following Jesus. And when I contemplate how they were vulnerable because they’d traveled as migrant workers to provide for their families, I remember migrant workers who have faced risks, family separation, and other challenges coming to the US as the only way to provide for their families. I think of the dad and son martyred in the Christchurch mosque who were Syrian refugees. I ask again how we can help those working and trying to survive on our society’s margins.

Mosebach’s book carries the subtitle, A Journey into the Land of the Coptic Martyrs. At times, as I read, I found myself impatient with the notion of journey, wanting instead to hasten on to the destination. The book starts with a vivid description of the video in which these men are led out onto a beach to have their heads cut off. The scene is gripping, and I was anxious to enter straight into the stories of the 21 men. Instead, however, we meander through a long imaginary conversation in a Cairo teahouse, a paragraph about birds that “cavorted,” a paragraph-long reflection about garbage as “one of the twentieth century’s most diabolical inventions.”

Occasionally Mosebach’s musings felt off-tune, like when he writes of one of the martyrs that “he was fair-skinned, and looked as if he could’ve been of European descent. Might the influence he was said to have on [the other martyrs] have come precisely from this—the fact that he looked like a foreigner among the others, and somehow stood equally apart from all of them?” I would be reluctant to speculate that his European-ness is part of what made him special, especially in light of the Christchurch terrorist’s manifesto, which objected strenuously to “mass immigration” and remarked, “I only wish I could have killed more invaders and traitors as well,” and “I am just a regular White man, from a regular family. Who decided to take a stand to ensure a future for my people.”

The book’s travelogue structure wasn’t always the approach I found myself wanting, but it might not pose a problem for other readers. I’m grateful Mosebach made the journey so I could spend time learning about men whose story I only vaguely remembered from the news headlines a few years ago.

The 21 also encouraged my own related (though much shorter) journey to attend a vigil for Christchurch mosque victims at a Chicago-area Islamic center two days after the attack. Among those who spoke were pastors, politicians, rabbis, and members of law enforcement. More than a thousand people attended. About half stood crowded around the walls of the room. Up front was one prayer rug for each victim. The imam said that as we mourn, we’re left with two questions: Why did this happen? What can I do about it?

The 21 models one important answer to the latter question. We can honor our martyred neighbors by seeking peace that passes—or maybe comes through—understanding. We can take a journey of empathy toward people we don’t know or understand. We can pray for God’s wisdom and guidance along the way. We can ask who among us is most vulnerable and needs protection. We can make the effort to learn and grow. We may not resolve all our serious disagreements, questions, and confusions. But we hope to develop the kind of empathy and connection that helps us love each other as neighbors and live well together.

Hospitality at the Islamic center vigil was remarkable, even as police were stationed in the lobby because of potential danger. I paused awkwardly at an entrance, wondering if I was about to enter a door reserved for women. A young woman in a hijab noticed and quickly said it was okay. She graciously showed me where to go. Men shook hands and thanked visitors for coming. They appreciated those who had taken a step in their direction in a moment when their community was mourning and feeling vulnerable.

In light of the sacrifice of those Coptic martyrs, this kind of personal commitment doesn’t ignore the challenge of taking on Muslim, Christian, nationalist, or white-supremacist extremists. It doesn’t ignore important theological differences. Rather, we can affirm that we won’t be paralyzed by fear. We can accept Jesus’ invitation to a faithful journey of following him, being his witnesses, and loving our neighbors.

Steps along this journey are crucial today if we’re going to have a more peaceful tomorrow. At the vigil, one of the pastors quoted Jesus’ words in John 14:27, words embodied by those Coptic men with each step they took on the beach that day—and words that can encourage us to take our next steps of love: “Peace I leave with you; my peace I give you. I do not give to you as the world gives. Do not let your hearts be troubled and do not be afraid.”

Kent Annan is director of humanitarian and disaster leadership at Wheaton College. He is author, most recently, of You Welcomed Me: Loving Refugees and Immigrants Because God First Loved Us (InterVarsity Press).

Psalm 119.42
So shall I have wherewith to answer him that reproacheth me: for I trust in thy word..
King James Version 1611, American Edition