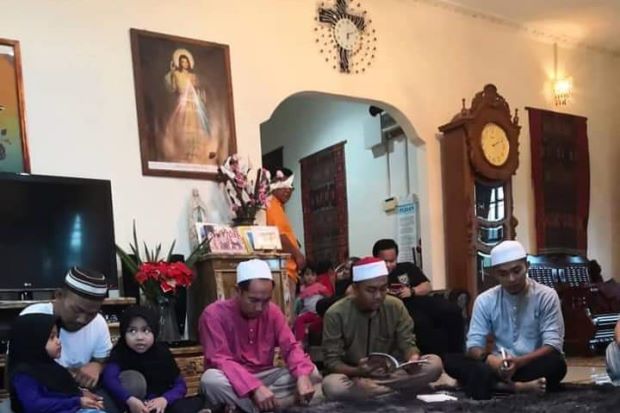 A photo of a group of Muslim trainee teachers conducting tahlil prayers in a Christian home in Tuaran near here has gone viral, with social media users describing the scene as a testament to Sabah’s strong inter-faith relations.

In the photo uploaded by Facebook user Amran Sopoh on Friday (May 10), the trainee teachers were seen sitting underneath a framed picture of Jesus Christ and a cross-shaped clock on the wall.

The photo caption read: “Salam Jumaat (Happy Friday greetings) and Happy Fasting. Maybe some people would be weirded out by this photo but for us living in East Malaysia, this is normal.”

Many commenters weighed in on the significance of the photo, saying that such a scene was commonplace in Sabah as there were many multicultural and inter-faith families in the state.

Muhamad Uzzair said that he and his colleagues from the Kent Teachers Training College were invited to recite prayers for the deceased – a Muslim convert whose parents were Christians.

According to him, the family of the deceased had reached out to the group and requested for assistance to conduct the tahlil ceremony in their Kg Bundung home in Tuaran on Wednesday (May 8).

“I read some of the comments on Facebook which suggested that people in Peninsular Malaysia would find this (practice) strange. Truthfully, if I hadn’t come to Sabah four years ago, I would have also found it strange to see Muslims carrying out tahlil prayers in a Christian home.

“Religious and racial differences are not a barrier for us to do good. Religion teaches us to love one another. We want the society to open their minds, and realise that unity starts from home. This rings true in Sabah,” he said.

Having lived in Sabah for five years, Muhammad Syukri Abd Rahim, 23, from Tumpat, Kelantan, said he respected the fact that Christian and Muslim family members can live harmoniously under one roof.

“It’s not shocking at all cause this is just how it is in Sabah. For us, as long as a place is clean and free from indecency, we can pray there.

“We were invited to perform the tahlil prayers for the deceased because his family, including his parents, understood the importance of the ceremony. A few of his siblings are also Muslims.

“This acceptance of their different faiths is one way his parents demonstrate devotion towards their children,” he added.

The post has so far been shared more than 640 times and generated over 121 comments.