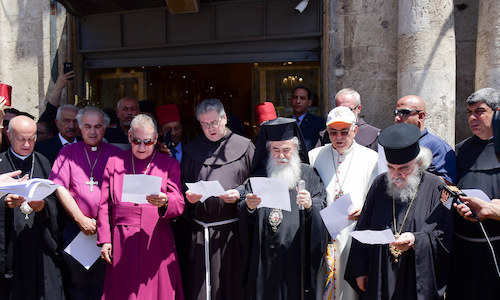 On 11 July, the Heads of Jerusalem Churches held a prayer rally near Jaffa Gate’s Imperial and Petra hotels, in protest of Israel’s Supreme Court decision to overturn the appeal made by the Greek Orthodox Patriarchate against the sale of three of its properties to a settlement group.

The rally was attended by patriarchs, bishops and priests from different religious denominations of Jerusalem.

The rally ended inside the Imperial Hotel where the Patriarch of the Holy City of Jerusalem, All Palestine and Jordan Theophilos III voiced his refusal, as a community of reconciliation, for radical groups to “dilute the integrity and character of Jerusalem’s Christian Quarter”, demanding that the rule of law be upheld against any attempt to take church properties by powerful measures.

He concluded by praying for the peace of Jerusalem and inviting Christians everywhere to converge in prayer in September 2019 for an international day of prayer for the Christian communities in Jerusalem.

Psalm 83.11
Make their nobles like Oreb, and like Zeeb: yea, all their princes as Zebah, and as Zalmunna:.
King James Version 1611, American Edition