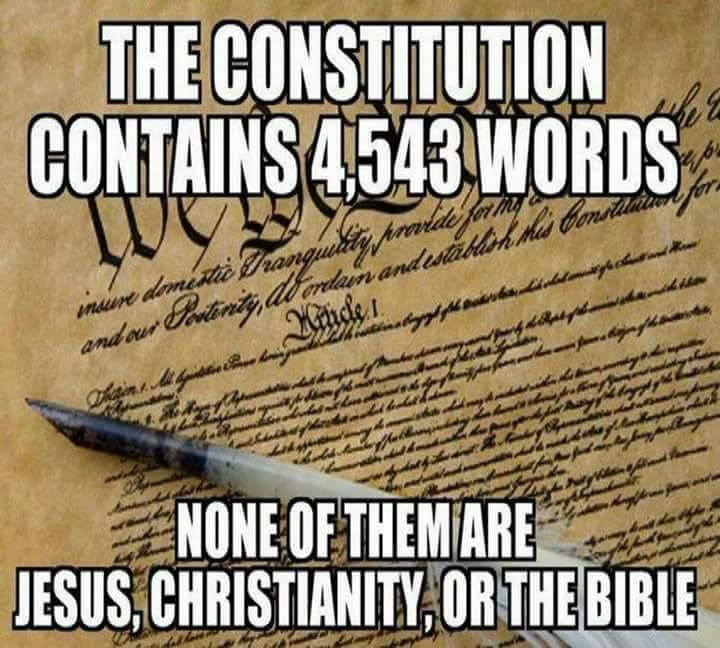 An interesting 2016 article in the Journal of the American Revolution (JAR) offers a compelling rationale:

“When read together, the Declaration and Constitution tell us that people’s rights are divine in origin, sacred and unalienable, while governments are human in origin, answerable to the people and entirely dependent on their consent.”

While indicating that the country was founded by godly ideals, if only partially, these documents offer zero evidence that America was born as a “Christian nation,” as fundamentalist Christian Right evangelicals insist.

Anthony J. Minna, author of the JAR article, contends that the Declaration is “an apology for revolution” and an assertion that the fundamental, “inalienable rights” of people are authorized by “their Creator,” while the Constitution is “a blueprint for stable and effective republican government in a free country” whose authority solely derives from the governed.

“The Declaration states that ‘all men are created equal, that they are endowed by their Creator with certain inalienable Rights, that among these are Life, Liberty and the pursuit of Happiness,’” Mina writes. “It is possible to see in these words an affirmation of the Founders’ religious faith, but God-given rights had less to do with theology in the summer of 1776 than they did with rebellion.”

The founding rebels desperately needed to assure the populace—and the oppressor, Great Britain—that the coming American revolution had God squarely on its side.

But once the war was won and the new nation could turn more resolutely to governance, and final ratification (in 1791) of the United States of America’s fledgling Constitution, secular practicality reigned.

The answer, he said, lies in the decidedly nonreligious aim of the Constitution—“to form a more perfect union, establish justice, insure domestic Tranquility, provide for the common defence, promote the general Welfare, and secure the blessings of Liberty.”

“These are wholly secular objects,” Mina writes. “Religious references are extraneous in a document drafted to further them.”

Mina believes the Founding Fathers also took into consideration the zeitgeist at the time of the Revolution, when “religion was widely viewed as a matter of voluntary individual choice. … The Constitution acknowledged these realities and, unlike contemporary European political orders, promoted no sect and took no position whatsoever on theological issues.”

As a result, there was no state religion codified and the Constitution stipulated that “no religious Test shall ever be required as a qualification to any Office or public Trust under the United States.”

The bottom line, Mina concludes, is that America was structured to be ruled by “popular sovereignty,” a then-newfangled Enlightenment concept of human governance.

“The government derives its legitimacy from the consent of the governed, not from an assembly of elders, not from a king or prelate, and not from a higher power,” he argues.

However, the Constitution also specified these church-state separations for the federal government, not the states’ governing bodies, because they were most concerned about potential overarching religious tyranny in national governance.

As we have seen, this has proven to be a problem when it comes to the supposed “wall” between church and state. Early on in colonial America, states had official state religions and levied religious taxes to finance government. Even Thomas Jefferson, the primary writer of the Declaration of Independence, found it difficult—but not impossible—to finally end the Church of England’s religious dominance over his home state of Virginia. Eventually, all state jettisoned their official creeds.

Which doesn’t mean Christian evangelicals don’t continue trying to embed religion in its myriad forms into the public square.

The struggle continues, although the two founding documents of the republic remain clear in their intent.