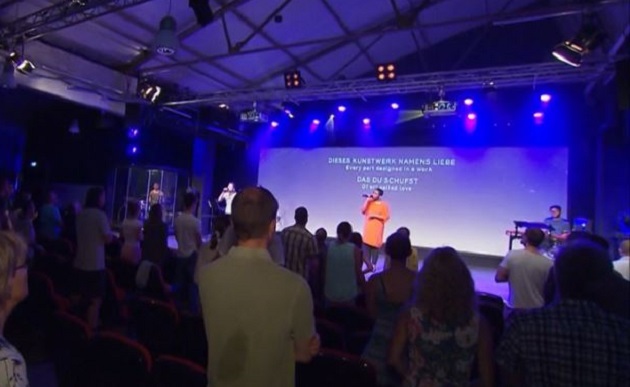 What are free churches? And why are they so well attended? These questions were raised by German public television ARD through its Baden-Württemberg SWR news show.

An almost 4 minute-long video report titled “Why are free churches booming?” visited in Karlsruhe a Sunday worship service of ICF (International Christian Fellowship), a free evangelical church present in Germany and other countries. According to ARD-SWR ICF is one of the 24 acknowledged free churches in the city.

The report opens with the testimony of Alexandra, a former Catholic who now leads the welcome team of the evangelical church. “We’re not active only on Sunday, but throughout the week, sharing our life with each other, praying, being there for one another… I’m passionate about this”, she tells the reporter.

The television report describes free churches as “recognised religious organisations that do not belong to the Evangelical [Protestant] or to the Catholic Churches”, which are defined “by a new packaging that contrasts with a rather old message”, the journalist says.

Steffen Beck, ICF’s pastor in Karlsruhe tells SWR: “Most free churches are conservative churches, we don’t hide this. But with that we mean we want to keep the [Christian] values and we don’t want to re-invent the faith, but we hold to the Bible and we don’t re-write it”.

The report also comments on the finances of free churches. It underlines that some members “give up to 10%” of their monthly income to the church, and the fact that donations can be made through mobile phone technology.

The tv report also highlights the big number of volunteers that help run the church activities. It also praises the capacity of free churches “to go with the times, producing and distributing their contents in a professional manner”.

The openness to change, the entertaining activities for children (“just as in a summer children’s club”), and the effort to “make old and new members feel welcome” are also causes for the success of these churches, according to the report. The journalistic piece closes with a critical voice of the SWR religion editor. He believes some free churches “are too closed to ecumenical relations”.

The Bible staged by Playmobil figures

Psalm 7.6
Arise, O Lord, in thine anger, lift up thyself because of the rage of mine enemies: and awake for me to the judgment that thou hast commanded..
King James Version 1611, American Edition