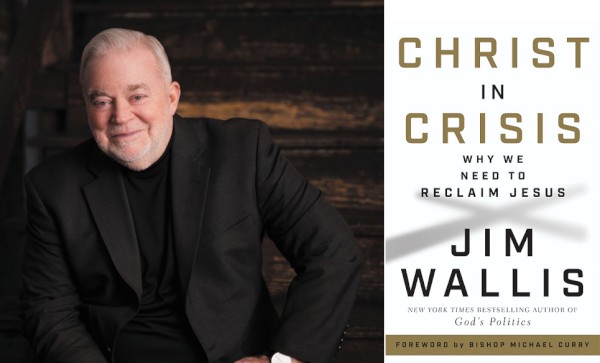 In an era of identity politics, Jim Wallis, a sage of the evangelical left, has a card to play: He asserts, “one’s identity in Christ precedes every other identity.” That is lifted from the 2018 “Reclaiming Jesus” Declaration, which was signed by an array of prominent Christians. This call to Jesus followers to be the conscience of the state and the culture forms the core of Wallis’ 12th book— Christ in Crisis: Why We Need to Reclaim Jesus (HarperOne, Oct.). He writes, “There are Christians everywhere who are determined not to be complicit or silent as their faith is hijacked for political ends, nor as their democracy and rule of law are hijacked for the personal gain of corrupt leaders and their families.”

HarperOne executive editor Mickey Maudlin calls it “a critical book. It would be wonderful if Wallis reaches people who seriously think [President Donald] Trump is God’s answer for our times, but I think the primary audience is people who were taught the Christian faith and know intuitively, if not explicitly, that something is out of sync. The witness of Christ is endangered if the church is disconnected from Jesus.”

Wallis put it more bluntly in a conversation with PW. He said, “Trump is operating in the spirit of the anti-Christ. I wonder if Jesus is weeping now.”

(This conversation has been edited for length and clarity/)

You’ve written many books focused on reviving, rediscovering, and speaking out for Christian values. How does this book differ?

I think this is the most important book I have ever written. [After Trump’s election] I was getting legions of calls from all over, from immigrants and activists, pastors and laypeople, black and white people who didn’t know what to do. A merely political response to Donald Trump is not enough. We are now seeing things in our national politics antithetical to Jesus’ teachings. I want to tell people, ‘Don’t go left. Don’t go right. Go deeper.’

Why is the heart of the book eight chapters addressing questions Jesus raised about topics such as “truth,” “fear,” and “who is my neighbor?”

This is a (theologian Dietrich) Bonhoeffer moment. He said the question is always, ‘Who is Jesus Christ for us today?’ We see the Bible in our times. We see the Pilate of today washes his hands of truth. People need to demand truth – and know it when they hear it – even as their president and his administration operate in ‘a swirl of lies.’ Look at fear. Democrats are fearful of doing faith outreach because religious fundamentalists want the world to think all religion is right wing. I say, ‘Hey, let’s draw these “Jesus questions” into the public discussion and change the religious narrative in the new election.’”

The 2020 election looms large in the book. Is there a political theme here?

Most of the Democratic candidates will be doing podcasts with me to talk about their faith and values. I taped one with (Sen.) Cory Booker already and (South Bend, Ind.) Mayor Pete (Buttigieg) is in touch. I know (Sen. Elizabeth) Warren has an underlined Bible and Biden is interested in talking as well. We launched the podcasts in September and we’re calling the series Soul of a Nation. A study guide for the book is coming out as well.”

Maintaining a prophetic stand in the public square can be exhausting. How to you keep going?

Jesus has always survived us Christians. I began reading the book of Acts to see how early disciples dealt with crisis. They wrote and they spoke out and everything they did, they did ‘in the name of Jesus.’ I couldn’t do this as long as I have done this if I were not sustained by something greater than optimism. Hope is something deeper. This book has a lot of good news in it – the good news of Jesus. Jesus says, ‘Be not afraid’ on stormy seas. I want to bring Jesus back into our boats.

Psalm 66.17
I cried unto him with my mouth, and he was extolled with my tongue..
King James Version 1611, American Edition