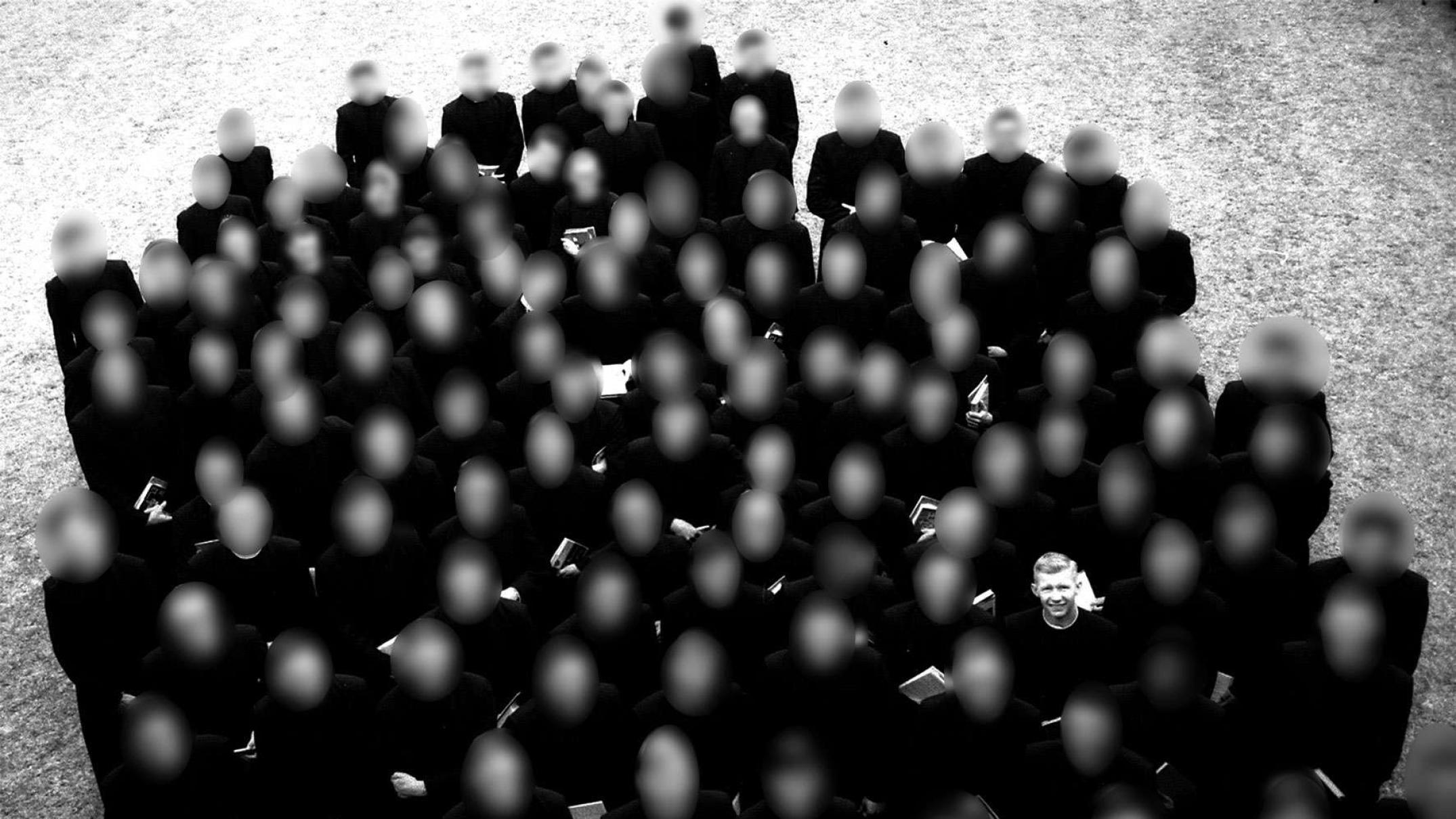 The boy in the photo is small, with skinny arms and a nervous smile.

“This is a week after I went to the Brothers,” Graham English says.

The morning light streams through the window at his inner Sydney home, onto the open photo album, as noisy birds flock around the blue gums outside.

“We had a really strong, I suppose, theology of perseverance.

The male Irish teaching order was founded in the 19th century to teach poor boys who otherwise had no access to schooling.

Migrants from the order went on to establish and operate orphanages and schools around the world, including dozens of institutions in Australia.

In line with canon law, its operations were completely autonomous from other authorities.

Between 1950 and 2010, there were around 1,600 Christian Brothers in ministry — more than any other male-only religious institute surveyed by the Royal Commission into Institutionalised Responses to Child Sexual Abuse.

At 16, Graham English became one of them.

As Brother Anthony, his life became a mixture of prayer, study and silence.

He took the black habit characteristic of the order, and after a year’s novitiate, lined up with other novices to take annual vows of poverty, chastity and obedience.

“We were a very religious family — every night after tea, we’d turn the chairs around and say the rosary. Every night,” he says.

It was the early 1960s. Robert Menzies was serving his second term as Australia’s prime minister, the Logies were in their infancy and Elvis was topping the charts.

But Mr English was in a wormhole where radio and newspapers were forbidden, televisions were locked in a box and family letters were read and censored.

“We were ignorant and kept ignorant,” he says.

“And when someone left you’d say, ‘He’s gone back to the world.’

“There was a very strong us and them.”

‘No man has greater love than this’

The Christian Brothers order was thriving.

Its dozens of schools around the country needed a steady stream of professed teachers and had a systematic annual recruitment campaign to target the schoolboys who would go on to staff them.

“Each year they had a special period called vocation week,” says Michael Bright, who features as one of the youthful faces in a brochure advertising the profession.

“It got to a fever pitch at the end, and then you’d be asked, ‘Now are there any boys that might like to join the Brothers?'”

The godliness of the calling was written into the vocation literature.

“A boy has to be generous to leave mother and father, brothers and sisters to follow Christ,” states a 1960s pamphlet, which describes the vocation as more important than “the deeds of scientists, space-men, artists or philosophers”.

“Being a Christian Brother means to be Christ-like and brotherly — brotherly to such an extent that we are ready to lay down our lives for our friends, our boys.

“No man has greater love than this.”

Mr Bright entered the training college before he’d reached puberty, at the tender age of 14.

Gripped in a state of fear, he says he was painfully conscious of the prospect of dying in sin.

“The world was painted in such a dreary colour that I thought — I want to get away from this,” says Mr Bright, now 72.

“It was supposed to be a refuge.

“So, when you had that form to fill out, which said: ‘Why do you want to become a Christian Brother?’, I still remember what I wrote: ‘To save my soul and to save as many other souls as possible.'”

The training college was at Strathfield, in Sydney’s inner west. There were also two rural campuses — known as the ‘novitiate’ — at Minto and Mulgoa, south and west of the city.

The regime was dominated by “order, obedience and industry” — and there was no room for friendship.

“We were forbidden to knock around with just one person all the time or play handball with them — actually, in the novitiate, we couldn’t do anything except in threes,” Mr English says.

“There was this kind of intensity that made us all slightly bonkers.”

The 13, 14 and 15-year-old boys who entered the order in the 1960s were forced to fumble their way through puberty in the dark.

“A week after we made first vows we had an old Jesuit come out and give us a talk, supposedly on celibacy,” Mr English says.

“He drew a daffodil on the blackboard and he talked about pistils and stamens and ended up saying, ‘And Brothers, it’s the same for you and me.’

“And that was our training in celibacy. The only instruction we got was: don’t.”

On one night, that instruction turned sinister.

“I was asleep in the novitiate, and I must have been having a wet dream,” Mr English says.

“I woke up with a light shining in my face.”

If you or anyone you know needs help:

Mr English says he’d been woken by a more senior Brother, who told him: “Put your habit on and follow me.”

“We went into his bedroom, and he sits in a chair and he makes me kneel in front of him and say over and over and over: ‘And Mary, by your pure and immaculate conception, make my body pure and my soul holy,'” he says.

“Eventually he was satisfied so he sent me back to bed.”

“I think it’s sexual abuse, but he didn’t touch me,” he says.

“I had just presumed I was wrong, although I think some part of me knew this was mad.”

Mr Bright says he didn’t reach physical puberty until he was 16.

“I had my first wet dream and wondered what the hell was going on,” he says.

“And the next 12 months after that, I thought there was something wrong with me. Any time of day I’d have a sudden erection.”

He says the year of religious training in the novitiate was the most horrific of his life.

Mr Bright says he has a distinct memory of being asked, inexplicably, to strip naked in the presence of another, older Brother.

“And I can see the statue of the Virgin in the corner and he’s sitting on the other side of the desk, and he said: ‘Michael, take your habit off, take your trousers down, drop your underpants.’

“And then he just looked at me, only for a minute or so — to this day I don’t know why.”

The order recorded 1,015 complaints of child sexual abuse — more than any other Catholic authority examined by the inquiry.

The head of the Christian Brothers in Australia, Oceania Province Leader Peter Clinch, gave evidence that elements of “violence” and “humiliation” in the formation of Christian Brothers may have had something to do with this appalling record.

“A lot of Brothers before my time … those who were involved in the 1960s, 1970s and 1950s, when this abuse was at its worst, would have entered so-called juniorate formation — some would have been as young as 14,” Brother Clinch told the commissioners in 2017.

“And they entered and really lived a religious life as if you were a 25-year-old under vows. It stunted their psychosexual development and they were uneasy with adult relationships.

“And so I think this resulted, unfortunately, with the poor development of psychosexual emotional development in relationships, and the dominance over young people exerted itself in a very catastrophic way, in the way of abuse, both physical and sexual.”

The royal commission found the “formation” of religious brothers more generally occurred in “segregated, regimented, monastic and clericalist environments”, which produced Brothers who were “cognitively rigid”.

“This increased the risk of child sexual abuse,” the commissioners found.

There are more than 250 surviving Christian Brothers in Australia, and fewer than 1,000 worldwide.

The current leadership did not want to be interviewed as part of this story — nor did individual brothers whom the ABC approached.

The order no longer recruits trainee brothers in Australia and says the last novice who entered and stayed in the order did so in the early 1980s.

The order does have novitiates in Africa and India.

A long history of abuse

At the royal commission, Brother Clinch was asked: “So how is it, that going forward, this same institutional dysfunctionality would not in fact occur?”

He replied that it was a “great question”.

“There are programs for formators … and I know now that any appointment to the formation of young men into the Christian Brothers has to be made by the congregational leader, not by the local provincial, so they are vetted at both levels,” he said.

Mr English spent 46 years — both as a brother and a layman — in Catholic education.

He says he knows of more than 40 people who have been either accused of child sex abuse, or convicted of it.

“And quite a lot of them have been or are in jail. In most cases I don’t know what they did,” he says.

“Mark Twain said if you tell lies you better have a very good memory.

Referring to the former prime minister who instigating the royal commission, he adds: “One day you get a Julia Gillard.”

Cutting ties with the order

Mr Bright was in the Brothers for a decade before his faith collapsed.

He was teaching French literature and philosophy in Canberra in the early 1970s when he decided he had “been conned”.

“I’m in front of a class of kids and I’m supposed to be teaching them that if they don’t go to church on Sunday, that you’ll go to hell, and I thought, I can’t do that! I don’t believe it!”

He has now cut all ties with established religion.

I think there have been so many good men, who have mistakenly sacrificed their lives to a cause which is questionable,” he says.

The photos in Mr English’s album turn colour soon after he met his wife, Erin, at the National Pastoral Institute in Melbourne.

“They were running a program up here of groupwork, counselling,” he says.

“Erin decided she’d go and I decided I’d go. There was a Marist Brother who had a car, so the three of us drove up.

“Erin gave me a camelia in a little vase, and I did the typical Christian Brothers thing, of not looking at her.”

That, he says, was the “start of our friendship”.

“She’s more adventurous than I am: she rang me up one day … she was still a nun, and she said, ‘I was sitting thinking today and I thought, I don’t have to be a nun if I don’t want to be,'” he recalls.

“It nearly ruined me, ’cause I knew I had to make a decision.”

After 17 years, Mr English and his partner left their respective teaching orders and flew to Brisbane; a few months later, they were married.

Mr English says he and others took vows of celibacy without enough information to form a proper judgment.

“I knew nothing about it, I had no information,” he says.

“The vows of celibacy that many priests and brothers took, they were null — people made them, without information.

“And with intimacy, you need more than information.”

Psalm 135.21
Blessed be the Lord out of Zion, which dwelleth at Jerusalem. Praise ye the Lord..
King James Version 1611, American Edition