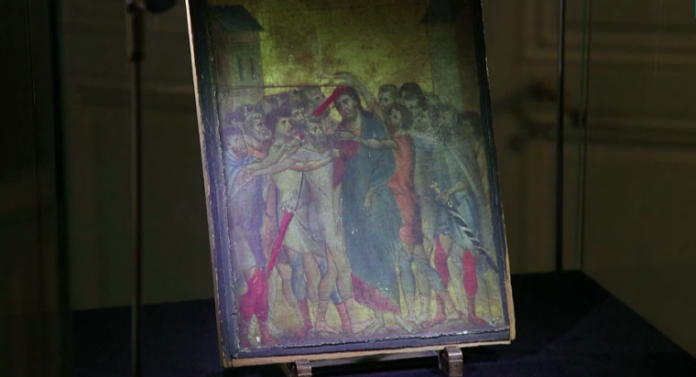 “Christ Mocked,” a long-lost masterpiece by 13th-century Italian artist Cimabue, has been found hanging in the kitchen of a woman outside Paris.

The piece from the pre-Renaissance painter was part of a diptych that originally contained eight panels from the Passion of the Christ and could be valued between $4.4 to 6.6 million, according to French newspaper Le Figaro.

The painting was found in the town of Compiègne after an auctioneer saw the work, which the French woman in her 90s had hung in her home, and told her to have it appraised, reports the French news agency AFP. It had been hanging between the woman’s open-plan kitchen and her living room and placed directly above a hotplate for cooking food.

According to the woman, her family thought it was just another religious painting.

“You rarely see something of such quality,” Philomène Wolf, the auctioneer who discovered the painting, told Le Parisien. “I immediately thought it was a work of Italian primitivism. But I didn’t imagine it was a Cimabue.”

Art expert Éric Turquin, who studied and valued the painting, said tests using infrared light found that there was “no disputing that the painting was done by the same hand” as other known works by Cimabue, The Guardian reports.

He pointed out that other panels from the Cimabue series have similar patterns of worm holes, indicating their authenticity.

“It’s the same poplar panel,” Turquin said. “We have objective proof it’s by the artist.”

“Christ Mocked” depicts a Christ-like figure cloaked in dark robes surrounded by a group of men who appear to be bothering him. Several of the men carry swords.

The painting, about 8 inches by 11 inches, is in very good condition and a “very important discovery,”  Xavier F. Salomon, the chief curator at the Frick Collection in Manhattan, told The Washington Post.

“If you think about it, this thing has been around for several hundred years; it’s probably been through a lot,” Salomon said. “It’s been through the French Revolution. It’s been through several wars. Works of art are more resistant than people think.”

“Still,” he added, “I wouldn’t recommend anyone putting something that old over a hot plate.”

The painting is slated to be auctioned Oct. 27 at the Acteon auction house in Senlis, France and could fetch a record-breaking price, according to Salomon.

“It’s effectively the first one since 1950, so it could break all records for paintings of that period and that type,” he said.

Cimabue, also known as Cenni di Pepo, is one of the pioneering artists of the early Italian Renaissance and known as the “father of Western painting.” Only 11 works painted on wood have been attributed to him, none of them signed.

“In the world of art history, this is seriously important,” said Salomon. “He is described in all the sources as the teacher of Giotto and with Giotto is sort of the beginning of European art … of Western painting, as we think of it,” he added. “So if you think of a 13th-century artist whose name is a sort of mythical name, to be able to find a new, previously [undiscovered] work by that artist is an unbelievable piece of news.”

Of the eight panels of the diptych, two known as “The Virgin and Child with Two Angels” and “The Flagellation of Christ” are in museums — one at the Frick and another at the National Gallery in London. The five remaining pieces have yet to be discovered.

Turquin told The Art Newspaper the newly-discovered panel is “the only small-scale work of devotion that has been recently added to the catalogue of authentic works by Cimabue.”

Pandemic inspires artist to create icon of Christ as healer

Psalm 119.142
Thy righteousness is an everlasting righteousness, and thy law is the truth..
King James Version 1611, American Edition