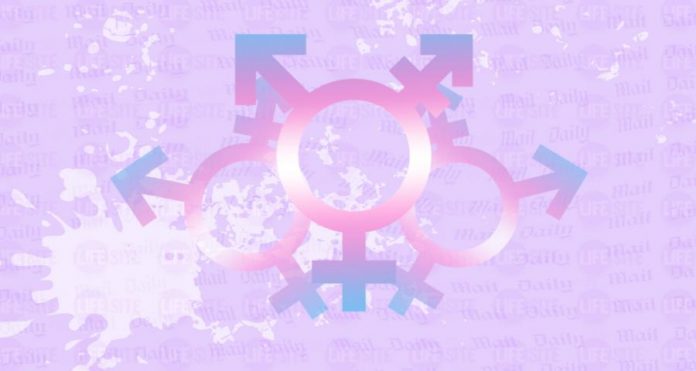 Major right-wing and anti-LGBTQ outlets, in particular Ben Shapiro’s The Daily Wire, posted content based on misconstrued data from the U.S. Food and Drug Administration to falsely suggest that drugs used to delay puberty are deadly for trans teens. The story — which began with debunked reporting from a U.K. tabloid — received high engagement on social media after right-wing and evangelical media apparatus boosted it.

The story was shared multiple times on Facebook by Daily Wire personalities like Shapiro, Michael Knowles, and Matt Walsh, as well as other popular conservative pages such as PragerU. The misinformation followed a familiar path of right-wing figures boosting lower-engagement content to higher-profile social media platforms so it reaches a larger audience.

Content pushing this anti-trans misinformation have accumulated at least 165,000 interactions in total, and anti-trans group The Kelsey Coalition is leveraging the same misconstrued data to fearmonger about gender-affirming medical care. In its September 27 report, NBC News noted that evangelical and right-wing outlets helped the story go viral, and the outlet debunked several of their claims.

The article referenced comments Jackie Doyle-Price, parliamentary under-secretary for health and social care, made to the U.K. House of Commons on July 23, which did not specify that the NHS was investigating any drug or raise alarm about puberty blockers. In fact, she said that “the treatments available on the NHS, particularly for children, are appropriate.”

The Daily Mail specifically pointed to Doyle-Price’s comments that she is “working with NHS England to do a proper review of the research around this service and the ethics of it to establish a proper framework for consent” for young people seeking assistance from NHS’ Gender Identity Development Service. An NHS spokesperson told NBC News that “no special review is being launched” into puberty blockers and “noted that all transgender health care services are regularly reviewed.”

The Daily Mail article earned less than 500 interactions on Facebook, according to Crowdtangle’s Google Chrome extension.

09/18/19
Conservative outlet National Catholic Register picked up the story and earned over 8,400 Facebook interactions
On September 18, conservative outlet National Catholic Register published an article that linked to a reprint of the Daily Mail article and repeated its false claim about an NHS investigation into puberty blockers. It also misleadingly claimed that “thousands of deaths” and “more than 41,000 adverse events” were associated with the drugs based on a misrepresentation of data from the FDA.

NBC News debunked that claim, noting that the “‘thousands’ of people who die while taking these drugs are likely the terminally ill cancer patients who receive hormone blockers to fight hormone-sensitive cancers, like prostate cancer, according to experts.” Joshua Safer, executive director of the Mt. Sinai Center for Transgender Medicine and Surgery, told NBC News that the conservative outlet was not relying on an individual study for its conclusions and was instead looking at “a big smorgasbord of reports and so the problem with that is you don’t even know that those deaths are connected to the agent they are reported to be connected to.” Safer noted that hormone-blocking drugs are also used to treat “infertility and certain types of cancer, particularly prostate cancer,” so any deaths connected to their use are “much more likely” to be associated with those conditions than the drugs themselves.

National Catholic Register also interviewed anti-trans endocrinologist Michael Laidlaw, who is a medical consultant for the Kelsey Coalition. The Kelsey Coalition is an anti-trans group for parents who advocate against accepting children’s gender identity. Laidlaw is one of the few public-facing members of the group and uses his position as a medical professional to give its arguments a veneer of credibility.

National Catholic Register’s article earned more interactions on Facebook than the Daily Mail’s, with around 8,400 interactions.

09/24/19
Led by LifeSiteNews, evangelical right-wing outlets boosted the story
On September 24, less than a week after the National Catholic Register article, LifeSiteNews published its own content falsely suggesting that puberty blockers could be dangerous or even deadly for trans youth and repeated the false claim that the NHS was investigating them. The right-wing evangelical outlet is known for pushing and amplifying anti-LGBTQ and anti-abortion narratives.

The article was shared by two pages affiliated with LifeSiteNews and earned more than 15,000 interactions on Facebook overall.

09/26/19
The Daily Wire picked up the story, and its network of right-wing Facebook pages helped it earn more than 165,000 interactions
Right-wing outlet The Daily Wire published a misleading September 26 article about puberty blockers which was shared by Facebook pages of other Daily Wire figures, including that of founder Ben Shapiro and podcaster Michael Knowles. The article began by misleadingly claiming, “More than 6,300 adults have died from reactions to a drug that is used as a puberty blocker in gender-confused children, Food & Drug Administration data shows.”

For the next two days, Facebook pages of several anti-trans figures associated with The Daily Wire shared the article in posts that earned more than 135,000 total interactions. The Daily Wire’s anti-trans pundits Shapiro, Knowles, and Matt Walsh posted the article on Facebook several times each, each occurring within several minutes of one another:

Walsh too posted the article at least four times on Facebook, sharing it with his 720,000 followers and earning about 6,000 total interactions.

As The Daily Wire’s article went viral, other right-wing outlets also posted similar content. For instance, TheBlaze, WND (which reprinted The Christian Post’s content), and Infowars all published misleading content about puberty blockers on September 26 and 27. In addition, One America News Network (OANN), a right-wing television outlet that regularly pushes conspiracy theories and has become one of President Donald Trump’s favorite networks, repeated claims dubiously linking puberty blockers to “more than 6,000 deaths and over 40,000 adverse reactions” in a segment aired on September 28.

09/26/19
Anti-trans group the Kelsey Coalition leveraged the same misconstrued data as part of a new campaign
On September 26, anti-trans group the Kelsey Coalition publicly launched its “First, Do No Harm” campaign, which cited the same data to misleadingly claim that “over 41,000 adverse reports have been filed with the FDA” about puberty-blocking drugs. As previously noted, NBC News reported that there is no way to know whether any of these reactions were related to the drugs or to other conditions.

The Kelsey Coalition stated that its campaign’s goal is “to inform medical providers about the lack of evidence supporting transgender pediatric medicine and the irreversible harms that result from hormonal and surgical interventions.” Furthermore, the group claimed to have already “formally requested members of Congress, the Office for Human Research Protections, and the US Surgeon General to investigate this pediatric medical scandal.” As part of the campaign, the Kelsey Coalition is asking medical professionals and others to send “Dear Colleague” letters “to as many pediatricians and healthcare providers that you wish” to inform them about “the harms that result from hormonal and surgical treatments” of transgender youth. An example letter on the group’s site also pushes the misconstrued FDA data.

Medical experts agree that affirming care for trans youth — including the use of puberty blockers — can be life-saving, and studies have shown that puberty blockers are both effective and safe. The right-wing and evangelical media ecosystems commonly spread misinformation on issues like this, and their networks are used to increase engagement and public outrage on issues like LGBTQ equality and abortion. In doing so, they give ammo to anti-trans groups like the Kelsey Coalition and help them with their efforts to organize anti-trans parents, policy makers, and health care professionals to block young trans people from receiving medically necessary care.

Despite Stigma, More Divorced Evangelicals Are Going to Church

Psalm 18.17
He delivered me from my strong enemy, and from them which hated me: for they were too strong for me..
King James Version 1611, American Edition