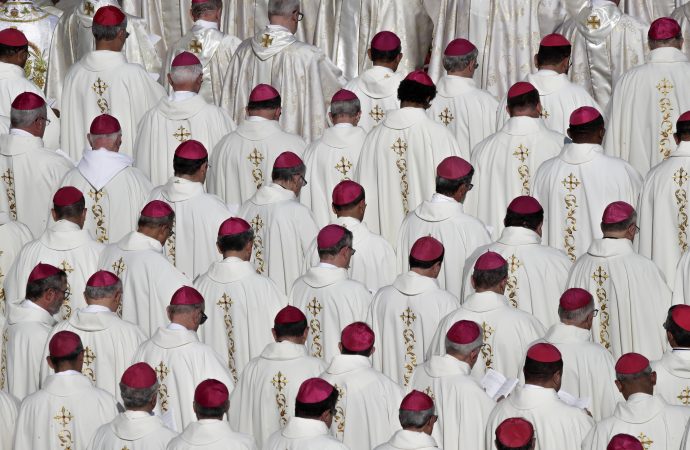 In any synod of bishops, the first cycle of results from the small working groups is generally the best bellwether of real sentiment inside the meeting. Judging from Friday’s reports, the Oct. 6-27 Synod of Bishops on the Amazon, there’s overwhelming consensus on most points, such as Pope Francis’s call for an “integral ecology.”

Yet even within that climate of basic harmony, there were also suggestions of at least some disagreement on two hot-button questions: Married priests and women deacons.

Some members of the synod, the first Italian working group said, “ask that in Christian communities with a consolidated path of faith, mature, respected and known persons, preferably indigenous, whether celibate or with a stable and consolidated family, be ordained, in order to ensure the availability of the sacraments that guarantee and sustain the Christian life.”

That request, it said, arose from hearing the voices of people consulted during the preparatory phase of the synod who asked “to be able to celebrate the holy Eucharist frequently and, possibly, stably, as an irrevocable right of the lay faithful.”

The group is led by Father Dario Bossi, a Comboni missionary in Brazil.

The Spanish-language groups almost unanimously voiced openness to the ordination of the viri probati and many also backed the idea of the women’s diaconate, praising the prominent role women play in indigenous communities in the Amazon.

The second Spanish group, for example, said their deliberation was done “in the optic of listening and discerning the voice of the Spirit that invites us to welcome the cry of our communities” and to explore ways of allowing the sacraments to grow and sustain the local communities in the Amazon.

Their proposal was “the possibility of conferring the priesthood to married men for the Amazon, on an exceptional basis, under specific circumstances and for certain specific peoples, clearly establishing the reasons that justify it.”

“It would not in any way be a second-class priest,” the group said.

The fourth Spanish group said that despite a regional priest shortage, “there can still be found married men of good reputation who are responsible and good examples of citizen virtues and who are good community leaders who feel the call to serve the people of God as instruments of the sanctification of the people of God.”

“It will be important to discern, through consultation with the people of God and the discernment of the ordinary of the place, the desirability of these people to prepare adequately and subsequently to be chosen for priestly service,” they said, insisting that should these men be ordained, they would not be priests of the “3rd or 4th degree,” nor would they be “a simple functional resource for the celebration of the Eucharist,” but true priestly vocations.

The first Portuguese group likewise concluded that “instituting ordained ministries,” including both the ordination of married men into the priesthood and that of women into the diaconate, is “necessary and urgent.”

The people ordained, they said, would be preferably indigenous who already have the respect of their communities, “to ensure the sacraments that accompany and sustain the Christian life of the community. In this way, we will give a feminine and maternal face to the Church.”

The second Portuguese group called for a strong focus on the formation of both celibate priests and viri probati, meaning tested married men who could serve as priests. The same group also said that the arguments for permanent male deacons are also valid for having permanent female deacons.

Yet there were also reports of opposition.

In the fourth Portuguese group, for instance, the report said participants “reaffirm the value of celibacy and the need for greater commitment to vocation.”

“Some synod fathers believe that the proposal [for married priests in the Amazon] concerns all continents, that it could reduce the value of celibacy or cause a missionary impulse to serve the most distant communities to be lost,” the first Italian working group reported.

“They believe that, in virtue of the theological principle of synodality, the theme perhaps should be placed before the opinion of the whole Church, and they suggest, moreover, a universal synod in that regard,” the report said.

“Some expressed perplexity about the lack of reflection on the causes that have led to the proposal to set aside, in some form, priestly celibacy as expressed by the Second Vatican Council and the successive magisterium,” it said.

Similarly on women deacons, the fifth Spanish group offered a resounding no to any form of ordination of women.

Instead, it suggested “taking up the theological reflection on the diaconate of women in the perspective of Vatican II,” and to rethink the ministerial structure of the entire Church, through the “peculiar style of women, of walking with and for the people.”

Yet the second Spanish group called for new lay ministries not just for men, “but also for women,” and urged participants to continue studying the question of the women’s diaconate “by looking more at its future possibilities than its historical past.”

Led by Bishop Francisco Javier Múnera Correa of San Vicente del Caguán, Colombia and Archbishop Edmundo Ponziano Valenzuela Mellid of Asunción, Paraguay, the group noted that many tasks women deacons had are already carried out by women in the Amazon, “who sustain the permanent presence of the Church in many places and nourish the processes of faith.”

The third Spanish group, led by Jesuit Father Roberto Jaramillo, president of the Latin American Jesuit Conference, and Bishop Jonny Eduardo Reyes Sequera, apostolic vicar of Puerto Ayacucho, Venezuela, stressed the need to ensure that the roles women play “do not keep them away from instances where decisions are made in the Church, because that is where what we preach is made reality.”

“Given the tradition of the Church,” they recommended allowing women to become permanent deacons.

Whatever tensions there may be on intra-Church matters, a strong consensus appeared to emerge that the Amazon and its peoples are presently under attack, and that the proper response is the sort of “integral ecology” outlined by the pontiff in his 2015 encyclical Laudato Si’.

All the Portuguese speaking groups called for an ecological conversion, and the urgency for the Church to care for creation, as well as a local institution that has an “Amazonian face.” Among the proposals made by the first group was the creation of an episcopal body that represents the local churches in the region, attached to the Latin American bishops’ conference known as CELAM.

One Portuguese group denounced what it called “nerve-wracking” violence in the Amazon, that goes from abuses of women to violence against nature. They proposed the creation of a “human rights observatory” for the region.

“Enough with violence in the Amazon!” the first Italian group said, reaffirming the rights of indigenous persons, those of African descent, fishermen, migrants and other vulnerable communities to their own “land, culture, language, history, identity and spirituality.”

“Life in the Amazon is menaced by destruction, environmental exploitation, genocide, eco-cide and bio-piracy,” the second Italian group said.

“A true cultural conversion needs to take place, promoted by the ‘integral ecology’ of Pope Francis in order to create projects that are environmentally friendly and sustainable as well as ‘new styles of life’,” it said.

The Spanish groups also mentioned concerns regarding increasing migration and urbanization, calling for greater formation of laypeople, priests and catechists in Amazonian communities, as well as an “enculturated” evangelization respectful of indigenous culture.

“When we speak of enculturation,” the fourth Spanish group said, it doesn’t involve just understanding a language or translating texts, “but understanding the life of the people and starting a dialogue, or a poly-dialogue, that is sincere and respectful.”

One concrete idea that seemed to have some traction is a proposal for a specific “Amazon Rite” of the Catholic Mass, which, as one of the Italian groups put it, would “give value to the symbols and gestures of local cultures in the liturgy.”

A Spanish group, however, stressed the importance of respecting local traditions and practices with a critical eye.

“In the liturgy and popular religiosity, the cultural expression of the people is manifested which illuminates the life and faith of the cultures,” it said, but cautioned that “there is a need to discern in order to purify what goes against the Gospel and the values of the same community.”

Finding ways to empower women beyond the diaconate was another theme that had an echo.

The first Italian working group proposed conferring the ministries of lector and acolyte on women, as well as creating a new officially recognized ministry of “coordinator of a community.”

Psalm 23.1
The Lord is my shepherd; I shall not want..
King James Version 1611, American Edition