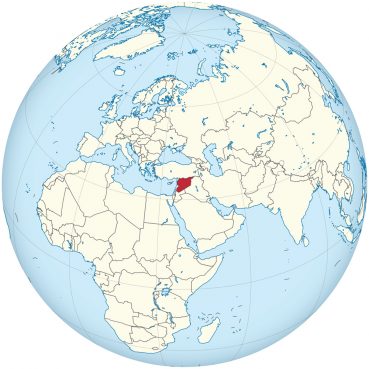 Earlier this month, the pastor of a Kurdish Christian church in northeastern Syria gathered his congregation to decide whether to leave or stay as Turkish forces pressed into the region after U.S. troops had suddenly withdrawn. In an area threatened for years by both the Syrian civil war and the international fight against the Islamic State group, the church was now in the  path of a new offensive against the Kurdish militias that Turkey had branded as terrorists.

Just eight families told the pastor they planned to leave, according to Open Doors President and CEO David Curry, whose organization supports persecuted Christians in the region. Most decided to stay.

“The rest are staying to try to be salt and light and love in this community. So that kind of courage is the thing that sticks out to me,” said Curry.

Other stories have emerged from Syria: missiles falling on communities, churches attacked by ground forces and a feared resurgence of the Islamic State group, also known as ISIS, and other extremist groups, according to Curry.

Children have been injured and killed in bombings in towns along the border with Turkey, according to The Washington Post.

At least 166,000 people have been displaced since the Turkish invasion began Oct. 9, according to the United Nations. At least 21 civilians were killed during a supposed cease-fire announced last week by the U.S. and Turkey, according to the Kurdish Red Crescent.

Smoke and dust billow from targets in Ras al-Ayn, Syria, caused by bombardment by Turkish forces, Tuesday, Oct. 15, 2019, seen from southeastern Turkey. Turkish artillery pounded suspected Syrian Kurdish positions near the town in northeast Syria amid reports that Kurdish fighters had retaken the town as Turkey pressed ahead with a military incursion that has drawn widespread condemnation. (AP Photo/Lefteris Pitarakis)

And U.S. Christians have been quick to react — not only expressing disapproval of President Donald Trump’s Oct. 6 decision to remove about 1,000 soldiers who had provided a cordon of security for the Kurdish areas in Syria, but also springing into action via Christian aid groups operating in that country, including Curry’s Open Doors.

“There are great security concerns for the Kurds and the Christians in this area,” Curry said.

What happens in Kurdish-controlled northeast Syria is important to Christians in the U.S. because the Kurds in turn offer sanctuary to the Christian, Yazidi and other persecuted religious minorities that the Trump administration has vowed to protect.

The Kurds, most of whom are Muslim, have welcomed those religious minorities and “allowed them to live in and amongst them as you would hope they would do in a great society,” Curry said. They have fought alongside U.S. troops against ISIS.

“I think right now there’s great puzzlement, surprise, disappointment that the Western world, from their perspective, seems to have abandoned them. And we’ve got to make sure that, from my perspective, we’re supporting these religious minorities,” Curry said.

Trump has said the conflict between Turkey and the Kurds in northeast Syria “has nothing to do with us” and compared the two sides to “two kids” fighting.

“Our votes caused this as the United States,” said Jeremy Courtney, founder of Preemptive Love, a Christian-led coalition that has been on the ground in Syria since 2016.

“Whether you voted for or against, at the end of the day, we’re all one nation, and so our American votes 100% gave the Kurds over — surrendered the Kurdish civilian population over to carnage, to destruction — and we need to take a kind of collective American responsibility for what we’ve done.”

Meanwhile, some of the president’s most faithful conservative evangelical defenders have been uncharacteristically outspoken in their disagreement with him over Syria.

In a statement written before the cease-fire was announced, National Hispanic Christian Leadership Conference Executive Vice President Tony Suarez said: “This is not a decision most Evangelicals advocated for.

“There have been conversations with members of the administration since the decision came about. I continue to believe that we have and are making a difference.”

Suarez said he was pleased with the leadership taken by Vice President Mike Pence and Secretary of State Mike Pompeo, who traveled to Turkey to broker the cease-fire with Turkish President Recep Tayyip Erdogan. That cease-fire, which Turkey has called a “pause,” was set to end Tuesday (Oct. 22).

Suarez also called Syria “a total mess” and said an eventual attack by Turkey was inevitable.

Televangelist Pat Robertson said on “The 700 Club” after Trump announced the withdrawal that the president was “in danger of losing the mandate of heaven” if he abandoned Kurdish and Christian minorities in the region.

Franklin Graham, son of the late evangelist Billy Graham, called on Christians to pray that Trump would change his mind as the evangelical relief agency Graham leads, Samaritan’s Purse, mobilized to help people in the region.

“The decision’s been made, and the president certainly had his reasons, and I respect his decision. Now we have to deal with the fallout,” he said.

For Samaritan’s Purse, which has operations in nearby Iraq, that means supporting the humanitarian needs of Kurds who have been displaced from their homes, according to Ken Isaacs, who oversees the organization’s international relief projects.

The organization is working with partners to provide tarps for emergency shelter, cooking supplies and medical care, as well as blankets and warm clothing as “winter is coming, and they fled their homes with the clothes on their back,” Isaacs said.

“Is some ways, it’s a typical refugee situation where people have the same needs as refugees,” he said.

Preemptive Love, which works with people of all faiths, has been providing food to displaced families and just launched two mobile clinics in northeast Syria to provide urgent medical care. It already has run out of food, according to its website.

And the U.S. withdrawal has “jeopardized” its work in the northeastern part of the country, according to Ben Irwin, a spokesperson for the organization.

Despite fears the return of ISIS in the region will threaten the safety of its teams, Irwin said, “We are not going anywhere.”

Open Doors began its work in Syria before civil war broke out in 2011, trying to “support and to strengthen the Christian communities there, some of which are quite historic,” Curry said.

As ISIS took over parts of the country, many Christians fled to the Kurdish-controlled region in the north, where the Kurds have protected them, he said. Open Doors estimates about 50,000 Christians live in the region.

“Now with the Kurds under attack, these Christian communities are particularly vulnerable,” he said.

For now, Open Doors is offering relief to those communities in the form of food, water, medical care and temporary housing, but “it may turn into a larger humanitarian problem,” Curry said.

“It sure seems like it could go that direction, but we’re doing those kinds of basic relief for these Christian communities,” he said.

“It will be ongoing, so it’s going to be a big challenge,” he added. “I think we need to rise to it.”

For Preemptive Love’s Irwin, that means staying with the Kurds long after the crisis has slowed.

“Keep showing up. Keep sending help,” he said. “Don’t just support the emergency response now while the bombs are falling. Keep caring about Syria once the rest of the world has moved on, as it has so many times before.”

Psalm 78.38
But he, being full of compassion, forgave their iniquity, and destroyed them not: yea, many a time turned he his anger away, and did not stir up all his wrath..
King James Version 1611, American Edition