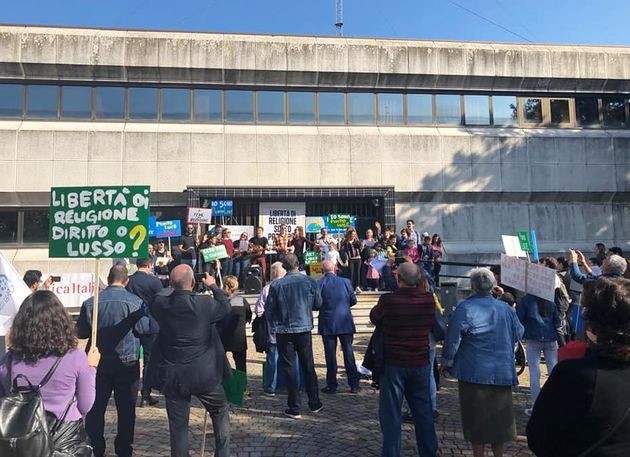 On June 26, 2019, the Italian church Punto Luce (Light Point) received an order from the municipality of San Giuliano Milanese in Milan, that prohibited them from meeting at their premises. Since then, the 70 members of the church no longer have a place to meet and live their faith together. They were banned from using the rented property for “worship, cultural events and social center”.

After several years of church activity, in December 2018, the local authorities checked the building from the outside and determined that it had not requested permission before their meeting.

“FREEDOM OF WORSHIP FOR ALL”

In response to this closure, the Punto Luce church and the Italian Evangelical Alliance (AEI) organised a peaceful demonstration from the church to the town hall of San Giuliano Milanese, claiming “freedom of worship for all”.

The march took plece on Saturday October 26, and was attended by almost 200 people from different evangelical churches. The event started with the pastor of the Punto Luce Church, Michael Schaafsma, explaining the reasons that led the Municipality of San Giuliano Milanese to order the closure of the church’s facilities.

Afterwards, the President of the AEI, Giacomo Ciccone, recalled the role and presence of evangelicals during the unification of the country and the fascist period, and he talked about the unresolved issue of  the recognition of pastors as ministers of worship, and the absence of a law on religious freedom.   The poster used y the AEI to announce the demonstration.

The closure of the church  facilities was also brought to the attention of the United Nations, during the Universal Periodic Review (UPR) of Italy on September 30, 2019, a procedure by which every member state of the UN is expected, every four years, to undergo a general examination in the field of human rights.

President Ciccone also talked about the predominant presence of the Catholic Church in public service networks, which leads to a disparity of treatment with respect to the majority religion. Fabrizio Petri, President of the inter ministerial committee on Human Rights of Italy, made himself available for a meeting in Rome to better examine the issues raised.

Psalm 136.10
To him that smote Egypt in their firstborn: for his mercy endureth for ever.
King James Version 1611, American Edition