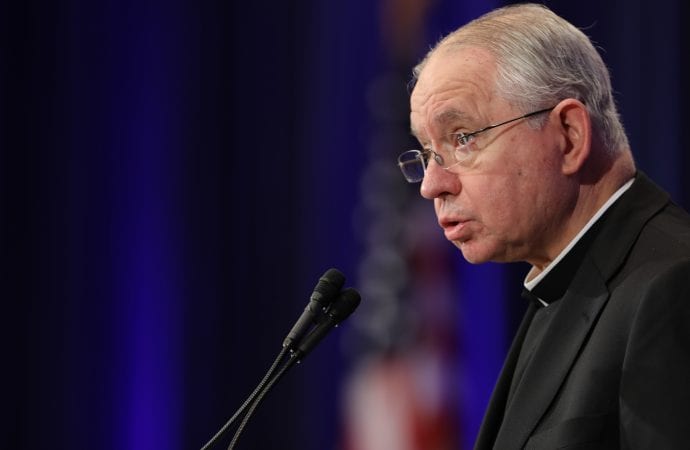 U.S. Catholic bishops elected their first ever Latino leader in a vote on Tuesday, elevating Archbishop Jose Gomez as president of the United States Conference of Catholic Bishops (USCCB).

Gomez, the Archbishop of Los Angeles, succeeds Cardinal Daniel DiNardo for whom he served as vice-president over the past three years. He was elected by an overwhelming majority of 176 votes during the first ballot and received an immediate standing ovation from the bishops present in the grand ballroom of the Marriot Waterfront Hotel.

Archbishop Allen Vigneron of Detroit will serve as Gomez’s vice-president for the three-year term. He was elected with 151 votes on a third-round ballot, beating out Archbishop Timothy Broglio, who leads the archdiocese for Military Services and received 90 votes.

Gomez, at 67, leads the nation’s largest and most diverse diocese in the country. Born in Monterrey, Mexico and naturalized as a U.S. citizen in 1995, he has become one of the U.S. Church’s most vocal champions of immigrants, regularly pushing for comprehensive immigration reform.

His 2013 book, Immigration and the Next America: Renewing the Soul of Our Nation, was dedicated to Pope Francis as the first pope from Latin America. He will now face the challenge of leading the U.S. bishops in their defense of migrants at a time when the Trump administration has threatened the status of hundreds of thousands of young undocumented migrants known as Dreamers and has vowed a continued crackdown of migrants at the southern border.

Along with migration, he has also been an outspoken advocate for religious liberty and pro-life causes, and in Los Angeles he has sought to bridge the divide between so-called “pro-life” and “social justice” Catholics through the creation of one umbrella diocesan office for Life, Justice and Peace.

At a 2016 conference at Georgetown University on overcoming polarization within the Church, which Gomez headlined along with Cardinal Blase Cupich of Chicago, he said that there are “no single-issue saints” in the Catholic Church.

Gomez was ordained a priest through Opus Dei in 1978. Prior to becoming Archbishop of Los Angeles, he was the Archbishop of San Antonio from 2005-2010 and an auxiliary bishop of Denver from 2001-2005. He has participated in two synods of bishops at the Vatican under Pope Francis, the 2015 synod on the family and the 2018 synod on young people.

At age 71, Vigneron is a long-time ranking member of the leadership of the U.S. bishops, most recently serving as secretary of the USCCB and as chairman of the committee of doctrine. Prior to his appointment in Detroit in 2009, he was the bishop of Oakland, California from 2003 to 2009. He is also the former chairman of the board of trustees of the Catholic University of America.

A native of Michigan, he is broadly viewed as a theological conservative, although he has become known as a strong participant in interreligious dialogue and an ally of the state’s large Muslim population. In 2015, after then-candidate Donald Trump first spoke about restricting Muslim immigration into the country, he condemned the proposal as a “far-reaching” threat to religious liberty.

While it is customary for the outgoing USCCB vice-president to succeed the president, due to Vigneron’s age, he would be close to the mandatory retirement age of 75 in 2022 when the bishops hold the next presidential election. While he would not be precluded from running for president, the fact that the pope could accept his resignation after turning 75 could possibly influence his decision to stand for president at the time.

During the morning session on Monday, outgoing president DiNardo delivered his final presidential address, where he urged the conference to continue to prioritize the fight against clergy abuse, abortion, and defending migrants.

The bishops also heard from the pope’s representative to the U.S., Archbishop Christophe Pierre who challenged the body to examine their priorities in regards to those of Francis.

“How have we and our local churches received the magisterium of Pope Francis?” he asked.

The bishops will continue their meeting in Baltimore through Wednesday where, among other agenda items, they will vote to approve a new letter to preface Faithful Citizenship, the voting guidelines of the U.S. bishops, and will hear reports on the ongoing plan to develop of a national third-party reporting system for abuse or misconduct by bishops, which according to new Vatican guidelines must take effect by next summer.

Psalm 31.4
Pull me out of the net that they have laid privily for me: for thou art my strength..
King James Version 1611, American Edition