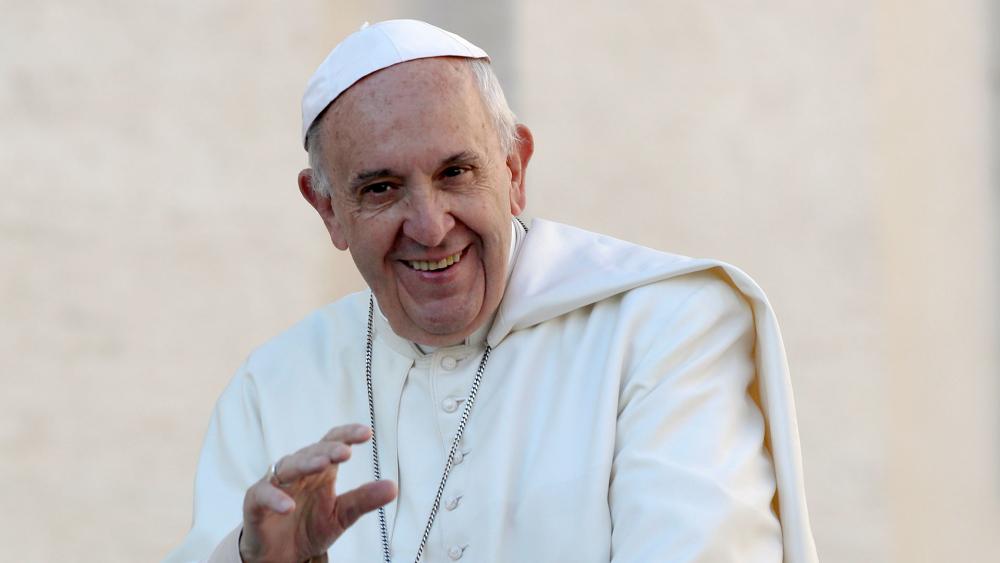 Ever the apologist, critics say Pope Francis has now gone off the deep end after he cited a work of fiction to argue that Christianity is as violent as Islam.

Jihad Watch reports that Francis quoted from The Song of Roland, an 11th-century fictitious poem, to prove Christians have tried to convert Muslims by the sword just like Muslims have done to Christians for centuries.

“A scene from The Song of Roland comes to me as a symbol, when the Christians defeat the Muslims and line them up in front of the baptismal font, with one holding a sword,” the pope recently told an Argentinean inter-religious dialogue group, a Vatican document shows.

“And the Muslims had to choose between baptism or the sword. That is what we Christians did,” he declared.

What Francis failed to mention is that Islam explicitly calls for aggression, and its followers are called by religious texts to conquer the world and force the Muslim faith on unbelievers. Anyone who chooses to leave the faith is killed, and that’s been the case from the beginning of Islam.

Nowhere in the New Testament or words of Jesus Christ can such a commandment to conquer be found. But this Islamic law has been followed for the past 1,400 years.

Jihad Watch notes Christians also defended themselves against expansionary Islamic marauders from the 7th Century onward as the latter rampaged through the Middle East and Africa, murdering far more Christians than Christians killed Muslims in all the Crusades combined.

And the killing of Christians continues. Christians are being targeted and killed to this day by Muslims in the Middle East and Africa. Most of the world ignores this genocide, including Francis, who insists “it’s not fair to identify Islam with violence.”

This is only the latest example of the pope’s ongoing pattern of defending Islam. He’s advanced theological reforms in Catholic schools to promote peace with Islam. He’s ignored human rights violations against Christians and others by Islam. Francis has saidthat “Christianity and Islam have more in common than people think…and the two religions defend common values that are necessary for the future of civilization.”

Last week, Francis even warmly greeted the Grand Sheikh of al-Azhar, Ahmed el-Tayeb, an Islamic scholar and cleric whom Jihad Watch says has approved of jihad suicide attacks against Jews and has called for Muslim converts to Christianity to be killed.

Robert Spencer, the director of Jihad Watch and a Shillman Fellow at the David Horowitz Freedom Center, wrote an article posted last week on the PJ Media website about Francis’s use of the fictitious piece of literature to prove Christianity is just as violent as Islam:

“Francis, for his part, proclaimed that ‘authentic Islam and the proper understanding of the Koran reject every form of violence,’ doing his bit to ensure that as many Christians as possible would remain ignorant and complacent about the jihad threat that his precious ‘dialogue’ does nothing to mitigate,” Spencer argues.

He concludes with a Bible verse: “Leave them; they are blind guides. And if a blind man leads a blind man, both will fall into a pit.” (Matthew 15:14)

Psalm 72.18
Blessed be the Lord God, the God of Israel, who only doeth wondrous things..
King James Version 1611, American Edition