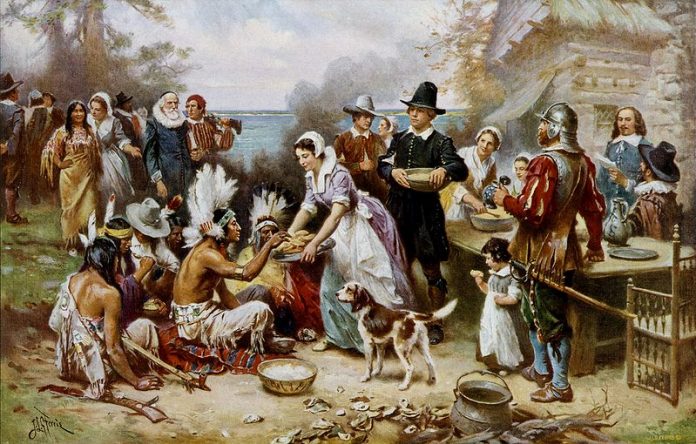 Thanksgiving is a day to give thanks for what you have – spending time with family and friends, and often indulging in delicious food. But do you know the real reason people celebrate Thanksgiving? Express.co.uk bring you a full guide on the federal holiday.

Why do Americans celebrate Thanksgiving?

The group were religious separatists seeking a new home where they could freely practice their faith, as well as others lured by the promise of prosperity and land ownership in the New World.

After a treacherous and uncomfortable 66-day crossing, they dropped anchor near the tip of Cape Cod, far north of their intended destination at the mouth of the Hudson River.

One month later, the Mayflower crossed Massachusetts Bay, where the Pilgrims, as they are now commonly known, began the work of establishing a village at Plymouth.

But unfamiliar with their new environment, the Pilgrims fell victim to exposure, scurvy, malnutrition and outbreaks of contagious disease.

Their fortune began to change when a Native American known in history as ‘Squanto’ began to teach the weakened Pilgrims how to cultivate corn, extract sap from maple trees, catch fish in the rivers and avoid poisonous plants.

He also helped the settlers forge an alliance with the Wampanoag, a local tribe, which would endure for more than 50 years.

The alliance remains one of the sole examples of harmony between European colonists and Native Americans, a relationship which eventually turned to violence and slavery at the hand of the colonists.

He invited a group of the fledgling colony’s Native American allies, including the Wampanoag chief Massasoit.

Now remembered as American’s “first Thanksgiving” — although the Pilgrims themselves may not have used the term at the time — the festival lasted for three days.

No official record of the first Thanksgiving menu exists, but historians believe many of the dishes were likely prepared using traditional Native American spices and cooking methods.

Because the Pilgrims had no oven and the Mayflower’s sugar supply had dwindled by the fall of 1621, the meal did not feature pies, cakes or other desserts, which have become a hallmark of contemporary celebrations

In 1623, the Pilgrims held their second Thanksgiving to mark the end of a long drought that had threatened the year’s harvest and prompted Governor Bradford to call for a religious fast.

Days of fasting and thanksgiving on an annual or occasional basis became common practice in other New England settlements as well.

Over the years, the practice of celebrating Thanksgiving became more and more commonplace, before New York became the first state to officially adopt an annual Thanksgiving holiday in 1817.

Today, Thanksgiving is one of the most important dates in many American’s calendars, and marks the beginning of the holiday season.

Psalm 28.9
Save thy people, and bless thine inheritance: feed them also, and lift them up for ever..
King James Version 1611, American Edition