Even so, the parochial vicar of the Cathedral of the Madeleine finds joy in celebrating Christian holidays like Las Posadas, Simbang Gabi and Midnight Mass during the month of December.

“After coming into the church, these events became more important to me and taught me a lot about the richness of Catholic faith as expressed in different cultures. Especially now as a priest I have a lot of Hispanic friends and I work a lot with the Hispanic community. And so events like Las Posadas have become dear to me, and I look forward to them,” Father Delka said. “It’s great to see the community come together and in a unique way tap into the events surrounding the coming of Christ into our world.”

While the lights, festivities and gifts of Christmas usually dominate December, those three Christian holidays, along with Hanukkah, Rohatsu and Solstice, are among several in the month of December that are celebrated by other faiths.

You might be surprised to learn that not all Christians celebrate Christmas. While members of some faith communities revere Jesus Christ, they don’t acknowledge the traditions of Dec. 25, according to a 2014 Deseret News article.

The Interfaith Calendar organization lists 15 religious holidays in December. Here is an explanation behind some of those holidays and why they are significant.

On this holiday, Buddhists remember when Buddha attained enlightenment while sitting under the Bodhi Tree and taught his followers how to live in harmony in their communities. The holiday, a day of remembrance and meditation, is viewed by Buddhists much like the Christian celebration of the birth of Jesus Christ. Buddhists will sometimes eat a meal of rice and milk on this day and children will make cookies in the shape of a leaf or tree to symbolize the Bodhi Tree.

Las Posadas is a Hispanic tradition that reenacts Mary and Joseph searching for shelter in Bethlehem, Father Delka said.

Prayers such as the rosary are offered, followed by a meal with music and the piñata activity.

This piñata is significant. Its form as a seven-pointed star represents the seven deadly sins (pride, envy, sloth, anger, lust, greed and gluttony). The blindfold represents faith, and the stick signifies hope and prayer in the fight to destroy sin. The various treats that fall out of the piñata symbolize the graces and good things we receive from God, Father Delka said.

The Cathedral of the Madeleine celebrated Las Posadas last Sunday. More information is available at icatholic.org.

This holiday is a Filipino Catholic tradition. It consists of a series of nine Masses leading up to Christmas. It’s a time of concentrated prayer and preparation for Christmas. During the Mass people will be in procession with star-shaped lanterns, which represent the star that guided the three wise men to Bethlehem to see the child Jesus in the manger.

The Cathedral of the Madeleine will hold its Simbang Gabi celebration on Dec. 18 at 7 p.m.

Yule is the holiday that acknowledges the winter solstice, when the North Pole’s tilt away from the sun creates the longest night of the year in the Northern Hemisphere.

A number of pagan traditions celebrate this holiday due to its association of the longest night and shortest day, when the cycles switch and the days will lengthen, according to Daniel Cureton, president of the Salt Lake Pagan Society.

“The solstices are almost universal for pagan traditions as they mark the cycles of the seasons,” Cureton said. “Since a large swath of pagan traditions are centered on a nature-based calendar, they have great significance.”

In celebrating the solstice, pagan and Wicca believers honor the winter-born king, symbolized by the rebirth of the sun. It’s a celebration of family, friends and nature, Cureton said.

“Litha is a time when I enjoy having outdoor activities to connect to the land and build my kinship with friends,” Cureton said. “Yule is when we stay indoors, discuss our plans for the new year, and reflect on what we’ve accomplished over the course of the year. … Yule isn’t about the presents under the tree, but about rebirth and ensuring family and friends make it through the long winter to the new year to begin anew.”

Hanukkah, the Jewish Festival of Lights, commemorates the Maccabean recapture and rededication of the Jerusalem Temple. Believers light the eight-candle menorah and come together for special readings and singing.

“Obviously, it’s a very family-friendly holiday and one that in addition to being very widely appreciated by every single segment of the Jewish population, is one that has very profound, far-reaching spiritual significance,” Rabbi Zippel said. “It has a very pertinent message to the lives that we live even today.”

For Rabbi Zippel personally, Hanukkah represents the “victory of light over darkness, of freedom over oppression,” and “of good over evil.”

“I think those are messages that are extremely applicable today,” he said.

People of all faiths and backgrounds are invited to the grand menorah lighting and Hanukkah celebration at the Capitol rotunda on Sunday, Dec. 22, at 5 p.m. Additional information is available at JewishUtah.com. 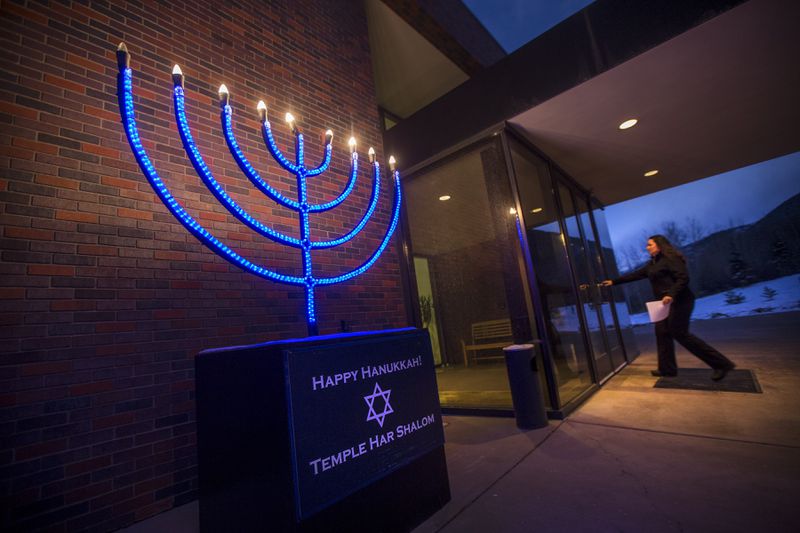 “Historically, Hanukkah commemorates a time when Jews were struggling against losing our religion and culture. In modern times it has come to celebrate religious freedom which we Americans hold so dear,” she said. “Jews have always been a tiny minority of the world’s population, and yet, by focusing on our core ethical values and by taking care of each other, we have outlasted all of the regimes and social movements that have tried to erase us from history. For me, this is the enduring understanding of Hanukkah.”

Midnight Mass, which actually starts at midnight, is a special way of celebrating the coming of the true light into the world, Father Delka said.

“The opening prayer for this Mass starts like this: ‘O God, who have made this most sacred night radiant with the splendor of the true light…’” Father Delka said. “We come to Mass in the dark of night. It’s cold and we are all tired. I think of this as representing the darkness and discord of our world and of our lives. But then there is a ray of light represented by the light and beauty of the Mass. In the prayers and the sacrament we encounter the Lord who comes as Savior to bring peace, reconciliation and hope.”

Special events like Midnight Mass, Las Posadas and Simbang Gabi help faithful followers to appreciate the life-changing effects of Christ’s birth in Bethlehem so long ago, he said.

“It was a night that changed history and my own life certainly would not be the same with Christ,” he said. “That God, the transcendent Creator of everything, would come to us as a vulnerable child and allow himself to be held is incredible when you really think about it. These different traditions of preparing for Christmas help me remember what it is really all about — that God is not distant and uncaring, but comes to offer peace and hope to a broken world.”

The Feast of the Nativity commemorates the birth of Christ in Bethlehem, the adoration of the shepherds, and the arrival of the wise men with their gifts. It’s considered one of the “most joyful days” of the Orthodox Church, according to Greek Orthodox Archdiocese of America.

Psalm 69.12
They that sit in the gate speak against me; and I was the song of the drunkards..
King James Version 1611, American Edition