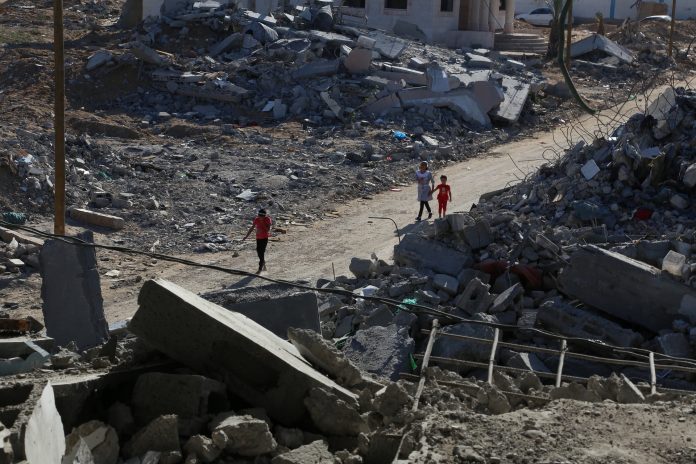 With fewer than 1,000 Christians in a population of 1.8 million, the Christian population in Palestine’s Gaza Strip today is less than half of what it was 10 years ago.

“They are — of all the Christian groups in the Holy Land — certainly by far the group that’s facing the most difficult,” Robert Nicholson, president and founder of the Philos Project, told CNA.

Nicholson is currently leading an initiative to help Gazan Christians. He insists the world does not need to wait for a resolution of the Israeli-Palestinian conflict to help the dwindling  Palestinian Christian population.

“Strengthening these communities need not necessarily be tied to politics,” Nicholson said.

Humanitarian circumstances for Gaza’s Christians have deteriorated since the radical Islamist Hamas takeover in June 2007, which prompted an Israeli blockade restricting the flow of commercial goods into Gaza. According to Caritas International, 80% of Gaza’s population lives below the poverty line.

The Christian minority in Gaza, which is mostly Greek Orthodox, also faces discrimination from the Muslim majority, according to Nicholson. “They are of course in Gaza being ruled by Hamas, a very extreme Muslim group that is rejected even by the Palestinian Authority. And, as Christians in this very difficult fundamentalist society, they face all kinds of social and political persecution,” he said.

This is one of the many factors that has led more and more Palestinian Christians to try to escape Gaza and to relocate to the West Bank, where many end up living with an irregular status and separated from their families.
“They are living in what is essentially an illegal immigrant status because of the way they moved from Gaza to the West Bank. They are washing dishes, they are cleaning homes. If they get arrested at a check-point, they get sent back to Gaza. And so these people, they’re living on the fringes of the society. Even the Christians of the West Bank are not doing that much for them,” Nicholson said.

Witnessing this struggle led Nicholson to start the Gaza Exodus initiative, which seeks to help reunite Christian families divided by the Green Line.

“We’re working with the Israeli and Palestinian governments to get their status normalized, to help them reunite with their families who are still in Gaza and to provide some basic level of financial support for them to make this transition,” Nicholson told CNA in October.

“There’s like social entrepreneurship that can happen that can lift the status of these Christians,” he said.

The Gaza Exodus initiative raised more than $20,000 in a three-month campaign at the end of 2019 to reunite four Christian families for Christmas.

Days before Christmas, Israeli authorities reversed a Dec. 12 announcement barring Gaza Christians from visiting Bethlehem and Jerusalem in the West Bank. Of the 800 travel permits requested, 316 were granted by Christmas Eve, Reuters reported.

Through the Philos Project, Nicholson has worked since 2014 to expose young people to the plurality of voices in Israel, Palestine, and throughout the Middle East.

The Philos Project brings Christian college students and young professionals on organized trips to the Holy Land to engage with the local religious and political realities. It is an ecumenical initiative with staff and fellows from Catholic, Protestant, Orthodox, and Assyrian backgrounds.

“What I’m trying to do is bring people into an encounter with the birthplace of their faith because there’s power in that encounter,” Nicholson said. “The Middle East is and will remain important.”

The Christian Controversy over Islam

Psalm 71.10
For mine enemies speak against me; and they that lay wait for my soul take counsel together,.
King James Version 1611, American Edition