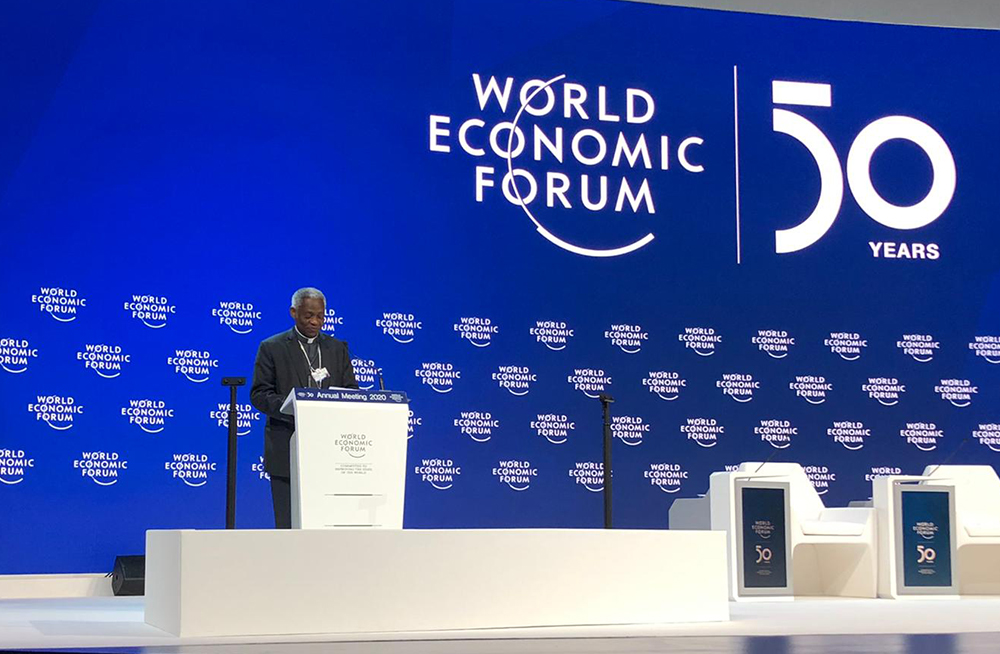 Pope Francis urged the rich and powerful attendees at the World Economic Forum in Davos, Switzerland, to set aside selfish concerns and make a joint effort to promote sustainability and fraternity for future generations.

“The overriding consideration, never to be forgotten, is that we are all members of the one human family,” the pope said in a message read to participants Tuesday (Jan. 21) by Cardinal Peter Turkson, who heads the Vatican department for Integral Human Development.

Francis emphasized the need to place the human person at “the very center of public policy” instead of pursuing “power or profit.” Turkson attended the event alongside a small Vatican delegation with the intent of promoting the care for creation and a special attention to the poor.

Last year, Pope Francis did not send a message to the market movers and shakers at Davos, choosing instead to send a slimmed-down Vatican delegation to the summit. But this year’s theme, “Stakeholders for a Cohesive and Sustainable World,” is right up the pope’s alley.

Starting with his encyclical on the environment, “Laudato Si’,” Francis has been a prominent world leader in combating climate change and promoting sustainability centered on the human person. That message seemed to clash with the fleet of private jets that landed in Davos last year, provoking global outrage and Twitter hysteria.

This year, the gathering promises to be among the most eco-friendly events in the world — in an effort to rebrand what has been for the past 50 years a summit of the world’s most wealthy and influential individuals.

Francis expressed hope that the meeting might promote a sense of international cooperation and help overcome “the isolationism, individualism and ideological colonization that sadly characterizes too much contemporary debate.”

He acknowledged that “too often materialistic or utilitarian visions” create practices and structures largely motivated by “self-interest.” The consequence of this lack of charity and solidarity, he said, is “real injustice” because it excludes most members of the human family.

“In seeking genuine progress, let us not forget that to trample upon the dignity of another person is in fact to weaken one’s own worth,” he said.

On Monday, the international nonprofit organization Oxfam published its yearly report on global inequality, alleging that the world’s richest people, fewer than 2,000 individuals, own collectively more than twice as much wealth as the other 6.9 billion people on the planet. On the same day, the Bank for International Settlements warned that the next financial crisis might be triggered by climate change.

For the cardinal, combating poverty and protecting the environment are connected.

“We need to listen and respond urgently!” Turkson said during a panel on Tuesday. “The cry of the poor and the cry of the earth go hand in hand.”

The Vatican delegation will be attending several panels at the World Economic Forum revolving around issues of inequality, poverty and the care of the environment.

Psalm 41.12
And as for me, thou upholdest me in mine integrity, and settest me before thy face for ever..
King James Version 1611, American Edition