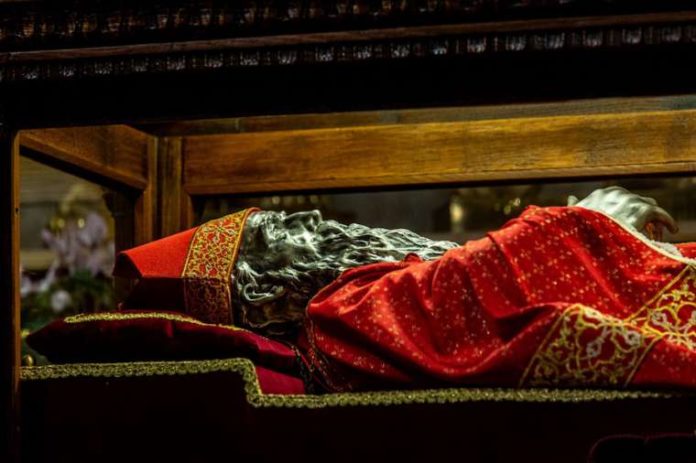 The relics of St. Timothy are in Rome this week for veneration during the Week of Prayer for Christian Unity.

The relics of St. Paul’s “beloved disciple” will remain in a side altar of the Basilica of St. Paul’s Outside the Walls through Jan. 25, when Pope Francis will visit the basilica to pray vespers on the feast of the Conversion of St. Paul.

On Jan. 26, Timothy’s relics will be moved to St. Peter’s Basilica for the papal Mass celebrating the first Sunday of the Word of God, instituted by Pope Francis as a day to promote knowledge and love of Scripture.

St. Timothy has come to be considered a symbol of unity, particularly among Orthodox Christians and Catholics. In 2011, Russian Orthodox and Catholic bishops met in Termoli, Italy to pray and venerate Timothy’s relics together.

“The fact that Timothy is a reference for the brothers of the Eastern churches opens us to a specific and special vocation to ecumenism as a desire to meet each person and to communicate to that person the love and closeness of God,” Bishop Gianfranco De Luca of Termoli-Larino, Italy said when the relics were moved from Termoli to Rome Jan. 17.

St. Timothy’s relics were discovered in Termoli in 1945 during restoration work on the crypt of the cathedral.

Covered by a marble tombstone, the restorers found an inscription in the marble tile stating: “In the year of the Lord 1239. Here rest in peace the body of the blessed Timothy disciple of the blessed Apostle.”

The Church celebrates the feast of Saints Timothy and Titus on Jan. 26.

The son of a Jewish mother and a non-Jewish father, Timothy came from Lystra in present-day Turkey. His mother, Eunice, and his grandmother, Lois, are known to have joined the Church, and Timothy himself is described as a student of Sacred Scripture from his youth.

After St. Paul’s visit to Timothy’s home region of Lycaonia, around the year 51, the young man joined the apostle and accompanied him in his travels. Timothy remained in the city of Berea to help the local church after religious strife forced Paul to leave. Paul later sent him to Thessalonica to help the Church during a period of persecution.

The two met up again in Corinth, and Timothy eventually journeyed to Macedonia on Paul’s behalf. Problems in the Corinthian Church brought Timothy back for a time, after which he joined Paul and accompanied the apostle in subsequent travels.

Like Paul, Timothy endured a period of imprisonment in the course of his missionary work. His release is mentioned in the New Testament Epistle to the Hebrews.

Around the year 64, Timothy became the first bishop of the Church of Ephesus. During that same year, he received the first of two surviving letters from St. Paul. The second, written the next year, urges Timothy to visit St. Paul in Rome, where he was imprisoned before his martyrdom.

Ancient sources state that St. Timothy followed his mentor in dying as a martyr for the faith. In the year 93, during his leadership of the Church in Ephesus, he took a stand against the worship of idols and was consequently killed by a mob. The pagan festival he was protesting was held Jan. 22, and this date was preserved as St. Timothy’s memorial in the Christian East.

Psalm 119.65
Thou hast dealt well with thy servant, O Lord, according unto thy word..
King James Version 1611, American Edition