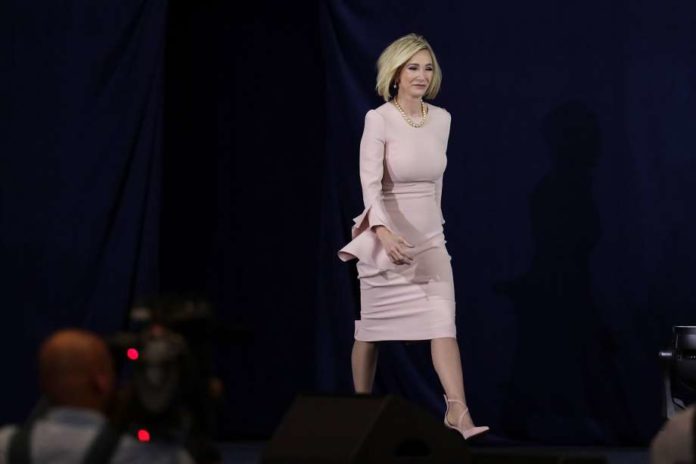 A Florida pastor and longtime spiritual adviser to President Donald Trump says she was speaking in metaphor when she recently prayed in a sermon for all “satanic pregnancies” to end in miscarriage.

“We declare that anything that’s been conceived in satanic wombs, that it will miscarry, it will not be able to carry forth any plan of destruction, any plan of harm,” White said before an auditorium of congregants.

As of Sunday morning, the clip, which was just under two minutes long, had been viewed more than 2.5 million times.

White’s words are largely being interpreted literally – that she wishes for evil women to have miscarriages – but she shared a rare response to the criticism in which she explained that she was speaking in metaphor, praying for evil plans to be foiled in her congregants’ lives.

Presidential spiritual adviser Paula White takes authority over the marine kingdom, the animal kingdom, and all "satanic pregnancies" that seek to harm Trump or the church. pic.twitter.com/pmrJEIxCHk

“I don’t normally respond but clearly this has been taken out of context,” White tweeted Sunday. “I was praying (Ephesians) 6:12 that we wrestle not against flesh and blood. Anything that has been conceived by demonic plans, for it to be cancelled and not prevail in your life …”

Ephesians 6:12, according to the King James Bible translation, reads: “For we wrestle not against flesh and blood, but against principalities, against powers, against the rulers of the darkness of this world, against spiritual wickedness in high places.”

After watching the clip, André Gagné, a theological studies professor at Concordia University and expert on the Christian right, said White was probably speaking in metaphor when she called for the miscarriages. He pointed to a book by Nigerian evangelist D.K. Olukoya that describes “satanic pregnancies” as “the plans that Satan has against a person’s life.”

According to Gagné, “White is commanding that Satan’s plans be aborted.”

“So Paula White wants everyone at @WhiteHouse to know she is praying for abortion,” tweeted Jennifer Gunter, an obstetrician and gynecologist who writes a column on women’s reproductive health for the New York Times.

White did not respond to a request for comment sent Sunday morning.

The 53-year-old megachurch pastor, who recently joined the White House Office of Public Liaison as a religious adviser, delivered the remarks during a sermon in which she inveighed against a variety of forces, including anyone who sought to harm Trump.

She also condemned “any hex, any spell, any witchcraft, any spirit of control, any Jezebel,” and “anything that the enemy desires through spells,” according to the footage.

Impassioned rhetoric is one of White’s calling cards. She has used the same type of language in numerous rallies and public events, including a re-election rally for Trump in June.

But it is almost unheard of for a leader of an evangelical church to call for the death of unborn babies in any context. The belief in the right to life and opposition to abortion rights are paramount political issues for religious conservatives, and defections from those stances are rare, even in metaphor.

An October 2018 article from Christianity Today, the country’s flagship evangelical magazine, offered a list of recommendations for pastors to help grieving couples cope with the loss of a baby. “Grieving parents need to know that their friends and church family care about them,” the article read. A post last year on the Billy Graham Evangelistic Association website also offers supportive words for mothers who have miscarried.

Miscarriages are the most common type of pregnancy loss, occurring in 10 to 20 percent of all pregnancies. The causes can vary: chromosomal abnormalities, infections, substance abuse. In the United States, medical professionals define a miscarriage as the death of an embryo or fetus before the 20th week of pregnancy. The loss of a baby after the 20th week is a stillbirth.

White has been in Trump’s orbit for years, sticking close to him as he has embraced the evangelical movement, an essential part of his support base.

The pair first spoke in the early 2000s when Trump called her with glowing reviews of her televised sermon, The Washington Post Magazine has reported. Focus on the Family founder James Dobson later credited White as having “personally led (Trump) to Christ.”

White said she was aware of Trump’s presidential ambitions long before he ran. She told The Washington Post in 2017 that Trump reached out to her in 2011 for advice on a White House bid. “I don’t feel it’s the right timing,” she said she told him.

When he did decide to run, White was involved with the campaign, at one point helping orchestrate a meeting with hundreds of evangelical leaders. And when Trump was inaugurated, White was one of six clergy members who spoke at the ceremony.

In October, she joined the White House in an official capacity, advising the president’s Faith and Opportunity Initiative and handling outreach to religious groups.

Psalm 73.22
So foolish was I, and ignorant: I was as a beast before thee..
King James Version 1611, American Edition

Emily McFarlan Miller - 14 July, 2020
0
Not long into the coronavirus pandemic, the Rev. Sandra Maria Van Opstal, a pastor at Grace and Peace Church on the West Side of Chicago, began...