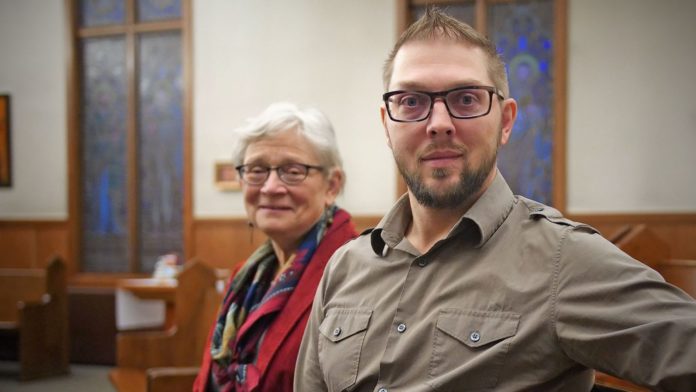 The “Berlin Wall” between Catholics and Evangelicals in Canada is slowly but surely being chipped away, say two experts who are part of a group at the forefront with a metaphorical hammer and chisel.

“People couldn’t imagine what the end of the Cold War was going to look like, and then one day they woke up and no one was guarding the wall. People started taking it down. Christian unity has to be something like it. Until it’s achieved, it’s kind of unimaginable. You don’t know what it will look like,” said Brett Salkeld, the archdiocesan theologian for the Archdiocese of Regina.

“We’re chipping away at that wall. Absolutely,” added Jo-Ann Badley, the academic dean at Ambrose University in Calgary.

“I really do hope that this is a model and a gift that will take it up. I think as we do that, what we will find is ways of moving forward. That’s what I would hope for, that we would find common language to begin to affirm each other’s participation in the kingdom of God.”

Both are members of the Roman Catholic-Evangelical Dialogue of Canada, which has met twice a year for more than a decade. It has produced two documents in which Catholics reflect on Evangelicals, and vice-versa. It’s an attempt to chip away at centuries of misunderstanding and misrepresentation.

“It’s a scandal to the world that Christians disagree and fight with each other,” said Salkeld, who co-hosts a podcast on theology for the Archdiocese of Regina. “So much of our disagreements are rooted in misunderstanding, misrepresentation. So much of Catholic-Evangelical relationships are built on literally centuries of mischaracterizing each other.”

The pair highlighted common Christian witness and agreement on social issues, while agreeing to disagree on others ranging from papal authority to the veneration of Mary. They shared their thoughts in an interview on the sidelines of a Jan. 24 presentation in Edmonton on the progress of Catholic-Evangelical dialogue, and capping off the Week of Prayer for Christian Unity.

Both say Catholics and Evangelicals have realized they have more in common than they thought, especially as Christian witnesses in an increasingly secular world. The dialogue has also strengthened the convictions on each side. Their hope is that the national dialogue will be replicated at a local level.

“There’s a lot of people for whom this is permission and relief,” Salkeld said. “We know that we are Christians, but we have no tools for talking to each other. We don’t know how we’re supposed to do this. Thank you. What can we do next? How about you take the documents and read them together and talk about them? It was amazing to see how excited people were about that possibility.”

Why have the national dialogue at all?

“The first reason is Jesus was pretty committed to that. We think of some the things he says in the Gospel of John, where the unity of the church is actually one of the pieces that make it credible, or incredible, believable or not believable,” said Badley.

“The second reason is that I think Jesus was probably right. In fact, the church’s witness in this time and place is more credible if in fact we treat our neighbours – particularly our Christian neighbours, as people who love the Lord and who are also trying to make their way in a world that increasingly doesn’t know the Lord.”

Over a decade ago, Canadian Catholic and Evangelical church leaders came together to speak out on Parliament Hill about common positions on social issues. It began with same-sex marriage legislation, and continues today on euthanasia and assisted suicide, as well as conscience rights for health-care workers.

“Obviously people don’t line up 100 per cent all the time, everywhere, but there’s a lot of common concern for what does it mean to be a public Christian in cultures that are increasingly secular,” Badley said.

Both Salkeld and Badley said the national dialogue, and meeting face to face, has helped dispel misunderstandings – so much so that there is more agreement in Canada than perhaps anywhere else.

“There’s a lot of competing for converts, for example, in Latin America,” Salkeld said. “Largely it’s Evangelicals converting traditionally Catholic populations, and that leads to a lot of tension. That’s not the same context that we have here.”

Nevertheless, there are some areas where the proverbial Berlin Wall still exists. Chief among them are papal authority and church structure – the Evangelical Fellowship of Canada is more loosely defined.

“The EFC is a collection of a wide variety of kinds of Evangelicals. We have no equivalent kind of authority structure,” Badley said. “Evangelicals would say the church is the gathering of those who have been converted and baptized, but the Catholics have much more of a sense that you’re born into this. “There is more of a sense that this is a community.”

“For Catholics, the church needs to have strong visible elements,” Salkeld added. “Things that Catholics can look at are things like sacraments. We know we are in communion with one another. Whereas, in an Evangelical vision of church, the church would be all the people who accept Jesus as saviour, which might include some Catholics but it doesn’t automatically include Catholics. For Catholics, if you’re baptized into this sacramental community, we can see the borders of the church. It’s more defined.”

Badley said the loosely defined structure of the Evangelical church made it more difficult for it to affirm the documents in the Roman Catholic-Evangelical Dialogue than it was for the Canadian Conference of Catholic Bishops.

Two other issues include the reading of Scripture and the Catholic veneration of Mary, which was the subject of the last Roman Catholic-Evangelical Dialogue meeting last December.

“At the end of the conversation, we concluded that we could see how what you’re doing makes sense … We still can’t see how it’s important or helpful or necessary. You come away with an understanding, a clearer sense of what’s going on here. But we’re still going to go ahead in our own two directions.”

“It’s really an acknowledgement of our inheritance from the early church. It isn’t as if Protestant thinking starts at the Reformation and somehow what happened in the other 1,500 years is irrelevant. There’s really a sense that in fact it turns out John Calvin was very influenced by St. Augustine; who knew? You get more of a recognition of our common heritage.”

Today, the conversations continue at the national Roman Catholic-Evangelical Dialogue. Both Badley and Salkeld say they have helped them define what they truly believe. But formal unity is a different matter. They say ecumenical dialogue doesn’t lead to relativism or the lowest common denominator.

“These are really rigorous conversations. This is not fluffy, everyone say the right thing to get along,” Salkeld said. “That’s not how ecumenical dialogue works.”

Badley adds: “To have a formal unity, where we’re all in the understanding and the structure is the same way, that doesn’t even happen within Evangelicalism. I taught at Newman for nine years … And I came away more profoundly Protestant than when I went in. It’s just because you realize ‘I really have strong commitments to these particular values’ and that I practise what I believe in a different kind of way.”

Still, they note there has been progress toward dislodging the bricks in the wall. Last November marked the 20th anniversary of the Joint Declaration on the Doctrine of Justification, a landmark agreement on what had been a fractious point of doctrine between Catholics and Lutherans.

‘This is the Christian message’: Cardinal urges Catholics to join struggle for racial justice

Psalm 71.9
Cast me not off in the time of old age; forsake me not when my strength faileth..
King James Version 1611, American Edition