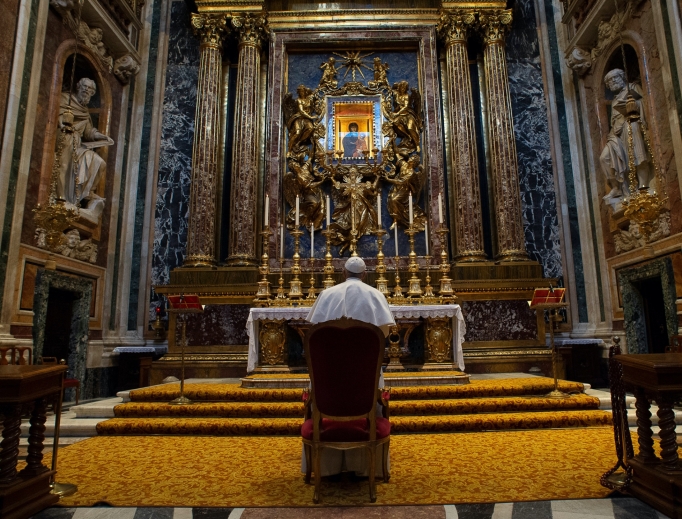 The speed with which coronavirus protocols had to be implemented late last week led to an understandable — and unavoidable — confusion. That confusion even hit the highest levels of the Church in Rome, with two senior cardinals in a very public conflict. And Pope Francis himself got involved.

But now with a few days to reflect, some principles and practices are emerging.

Prayer Is Not Canceled but Continues

That’s not just a scriptural reality: “Pray constantly” (1 Thessalonians 5:17; Christian Standard Bible); “from the rising of the sun to its setting the name of the Lord is to be praised” (Psalm 113:3; New American Standard Bible). It’s also a civic reality in the United States. President Donald Trump declared Sunday, March 15, a national day of prayer, quoting the Scriptures: “Casting all your care upon him, for he careth for you” (1 Peter 5:7; King James Version); and “For with God nothing shall be impossible” (Luke 1:37).

The pilgrimage of Pope Francis on Sunday to two important Roman shrines — Salus Populi Romani at St. Mary Major and the miraculous crucifix at San Marcello al Corso — emphasized that the prayer of the Church continues.

Therefore, while it is useful shorthand to say that “Masses are canceled,” more detailed communications should stress that Masses are not canceled, but the participation at them by the faithful in large numbers is canceled. Everywhere where the public participation of the faithful has been prohibited, priests are still expected to offer the Holy Mass privately.

Now that there is time to make sober adjustments, pastors might find creative ways to publicly continue the prayer of the Church. Prayer at home is, of course, always possible and necessary. The Church in Italy has a Twitter hashtag: #iopregoacasa — “I pray at home.” But prayer outside the home in holy places also should continue, respecting public-health requirements.

Toronto Gets It Right

There can be no negative judgment upon bishops who faced unimaginable decisions to be made in a matter of hours, but it is possible to see where the response was exactly right — the Archdiocese of Toronto.

Addressing his faithful on Friday, March 13, Cardinal Thomas Collins spoke as a pastor of souls, not like a public-health official. In this case the roles are complementary but distinct. Cardinal Collins got the distinction:

“The Holy Eucharist is the source and summit of our life in Christ. Not to celebrate the Holy Eucharist on the day of the Lord is an extraordinary spiritual suffering for the disciples of Jesus Christ. Indeed, in ancient times, the Christians had a saying, ‘Without the Sunday Eucharist, we cannot continue.’ For this reason, while we are following the advice of the health authorities, as is our civic duty, we hope that this period [of restrictions] will be brief.”

Cardinal Collins decreed that “public Mass for the faithful” was to be canceled in all parishes this past Sunday. At the same time, parishes were directed to keep the churches open for private prayer and Eucharistic adoration. With small numbers spread out throughout the church, such prayer is not a public-health risk and emphasizes that the prayer of the Church continues.

The Toronto model would seem to fit many parishes. In places where Eucharistic adoration usually takes place in small chapels, it could he moved to the main altar of the principal church, which allows more space to spread out.

In places — like Italy — where all public movements are restricted, even that might be too difficult. But in some hard-hit places it still might be possible for a pastor to have adoration with only one or two people present.

With Italy being the most afflicted country in the world and in total lockdown, the “mother and head of all the churches” — the Diocese of Rome — faces unprecedented and challenging circumstances.

Last week saw confusion and conflicts. The cardinal vicar for Rome, Cardinal Angelo De Donatis, declared all churches to be closed. Public Masses had been canceled weeks ago, but now even the church buildings were to be shuttered.

Cardinal Konrad Krajewski, the papal almoner who conducts the Pope’s personal charity among the homeless, the poor and refugees, promptly went to his church, opened it and began Eucharistic adoration. He told the media that he was serene about this act of “disobedience” but that churches could not be closed for prayer.

It’s quite normal in this pontificate for senior cardinals to be in public conflict, but given the national emergency, this was rather embarrassing. Cardinal De Donatis was summoned to see the Holy Father and soon after rescinded his closure order. Churches would remain open for private prayer.

For Rome the policy seems to be no public gatherings but no ban on prayer in holy places. The papal visits on Sunday confirmed that. As Rome is to be a mother and teacher of the whole Church, some key symbolic actions there would be welcome.

The cardinal vicar for Vatican City already leads the Angelus and Rosary in an empty St. Peter’s Basilica each day. Other similar actions might be worth considering:

Many Catholic long-term care facilities have prohibited visits to the sick, which can constitute a grave suffering for them. Perhaps a few people might gather outside on the street to pray for those inside, perhaps singing a few hymns, to let them know that they are spiritually accompanied. If chaplains of such hospitals and nursing homes are permitted access, they may consider simply carrying the Eucharistic Lord through the corridors, blessing people through open doors without entering their rooms: no public gathering nor procession, but bringing the Lord close to those who are understandably anxious and afraid.

How might preachers preach in this time of pandemic? There are plenty of comforting passages in the Bible for those suffering and sick. Yet it might be a time to recover, in part, the biblical view of the world. For contemporary man, who has tamed nature, it is hard to understand how those in biblical times understood the world around them.

For us, the waters are places of recreation — consider the cruise industry — and bounty. In biblical times it was a place of danger, hence the symbolism of the waters of baptism being a sign of death. Biblical peoples lived with pestilence and plague as an expected part of life. In Lent we return to the story of Exodus and the plagues sent upon Egypt. This Lent, those passages might resonate more deeply.

Authentic religion does not call for churches reopening in a pandemic

Psalm 81.8
Hear, O my people, and I will testify unto thee: O Israel, if thou wilt hearken unto me;.
King James Version 1611, American Edition