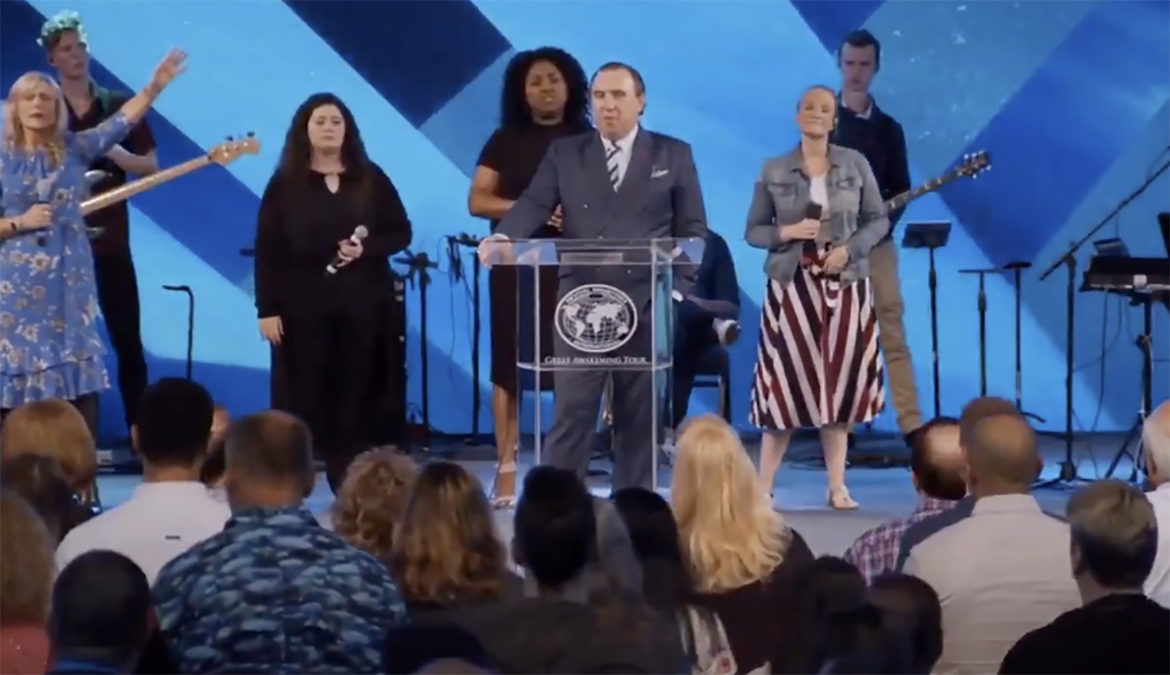 As nations around the world buckle down amid coronavirus outbreaks, approaches to isolation and social distancing are inconsistent, at best, in the United States. While some cities and states are implementing bans on restaurants and bars staying open and capping the number of people in a space, some groups are moving forward with, ahem, business as usual. One example from last Sunday morning? Pastor Guillermo Maldonado, of King Jesus International Ministry, a megachurch in Kendall, Florida, encouraged his congregation to keep coming to service, downplaying concerns about the coronavirus pandemic, as reported by the Miami Herald.

“Do you believe God would bring his people to his house to be contagious with the virus? Of course not,” Maldonado, a Trump supporter, said to his congregation, as reported by the outlet.

“This service is usually packed. So now they’re home in a cave afraid of the virus, that you want to transmit the virus,” Maldonado continued. The Herald noted the venue “appeared half empty.”

Maldonado’s take contradicts advice from the Center for Disease Control and Prevention (CDC) to cancel group gatherings of more than 50 people for the next two months. It also stands in opposition to what other religious groups are doing. For example, Catholic churches have begun canceling mass until further notice, the Church of Jesus Christ of Latter-day Saints (the Mormon church) canceled service indefinitely, and even some megachurches have switched to virtual services.

Of course, this is far from the first time Maldonado has been outrageous. The pastor once told his congregation that no undocumented immigrants would be deported if they attended a Trump campaign rally held at the church. As reported by The Advocate, Maldonado has claimed homosexuality “invites unclean spirits into our lives” and may stem from a “demonic attack while in the womb.” In terms of being chummy with Trump, Maldonado was selected to pray for the president as part of the “Evangelicals for Trump” rally in January.

Maldonado is not the only religious leader dismissing coronavirus concerns. Pastor Rodney Howard-Browne, also a Trump supporter, encouraged people to shake hands while at service in Tampa, Florida, as seen in the Twitter video below.

A revivalist church in Tampa, Florida was open today despite a global pandemic because they're "not pansies."

The pastor, Rodney Howard-Browne, is a climate change denier and, despite warnings from medical professionals, encouraged people to shake hands. pic.twitter.com/Px6coYjRSR

“If we die, we die for Christ,” Maldonado told parishioners. “If we live, we live for Christ, so what do you lose?”

Given that a mere 26% of Republicans believe coronavirus will impact their day-to-day life in a major way, perhaps this isn’t surprising. But it’s definitely concerning, especially as we consider that people generally leave these large, congested spaces and go back into the world with everyone else, including the immunocompromised and the elderly. Decisions like these are dangerous for all involved and reinforce the point that amid rampant misinformation, we should be trying to educate others with patience, not mock or dismiss.

Psalm 37.20
But the wicked shall perish, and the enemies of the Lord shall be as the fat of lambs: they shall consume; into smoke shall they consume away..
King James Version 1611, American Edition