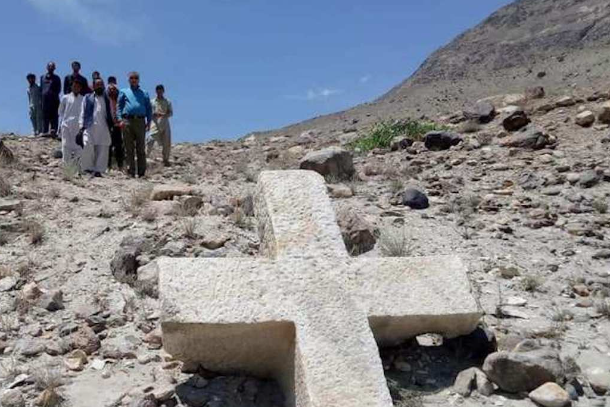 KARACHI: A Christian cross believed to be up to 1,200 years old and weighing more than three tons has been discovered in Skardu in northern Pakistan.

A three-member expedition team from the University of Baltistan, Skardu, discovered the huge marble cross high in the mountain range of Kavardo in Baltistan.

The team — led by vice-chancellor Muhammad Naeem Khan together with director of academics Zakir Hussain Zakir and director of external links Ishtiaq Hussain Maqpoon — visited the site to study the cultural find accompanied by local villagers and mountain guides.

“The huge cross of marble rock weighing 3-4 tons and measuring approximately 7×6 feet has been found some two kilometers from the base camp, high in the mountains of Kavardo, Baltistan, overlooking the Indus River,” the team said in a press release on June 14.

Khan described the discovery of the cross as if “it descended on Karakarum directly from the heavens.”

According to researcher Wajid Bhatti, it is a Thomanian cross and one of the biggest crosses discovered on the subcontinent.

This is the first evidence of a holy cross in Baltistan. Throughout the centuries, the cross in various shapes and forms was a symbol of various beliefs. In pre-Christian times it was a pagan religious symbol found throughout Europe and Western Asia.

The university plans to reach out to European and North American universities and develop academic links with local historians to ascertain the exact date of the cross and to scientifically describe the “Kavardo Cross,” as it has been dubbed.

“It is indeed great news for all of us that an ancient cross was found in Skardu. It shows that Christianity existed in this area and there must be a church and houses of Christians. There are currently no Christian families in that area, but they were once present,” said Mansha Noor, executive director of Caritas Pakistan.

“I request the authorities invite international historians to find out more about the accurate history of the cross.”

Norman Gill, a Catholic banker based in Karachi, expressed joy at the discovery of the ancient cross.

“The Christians here should be allowed to visit the area and see the cross once all formalities are completed,” Gill said.—

Psalm 147.10
He delighteth not in the strength of the horse: he taketh not pleasure in the legs of a man..
King James Version 1611, American Edition