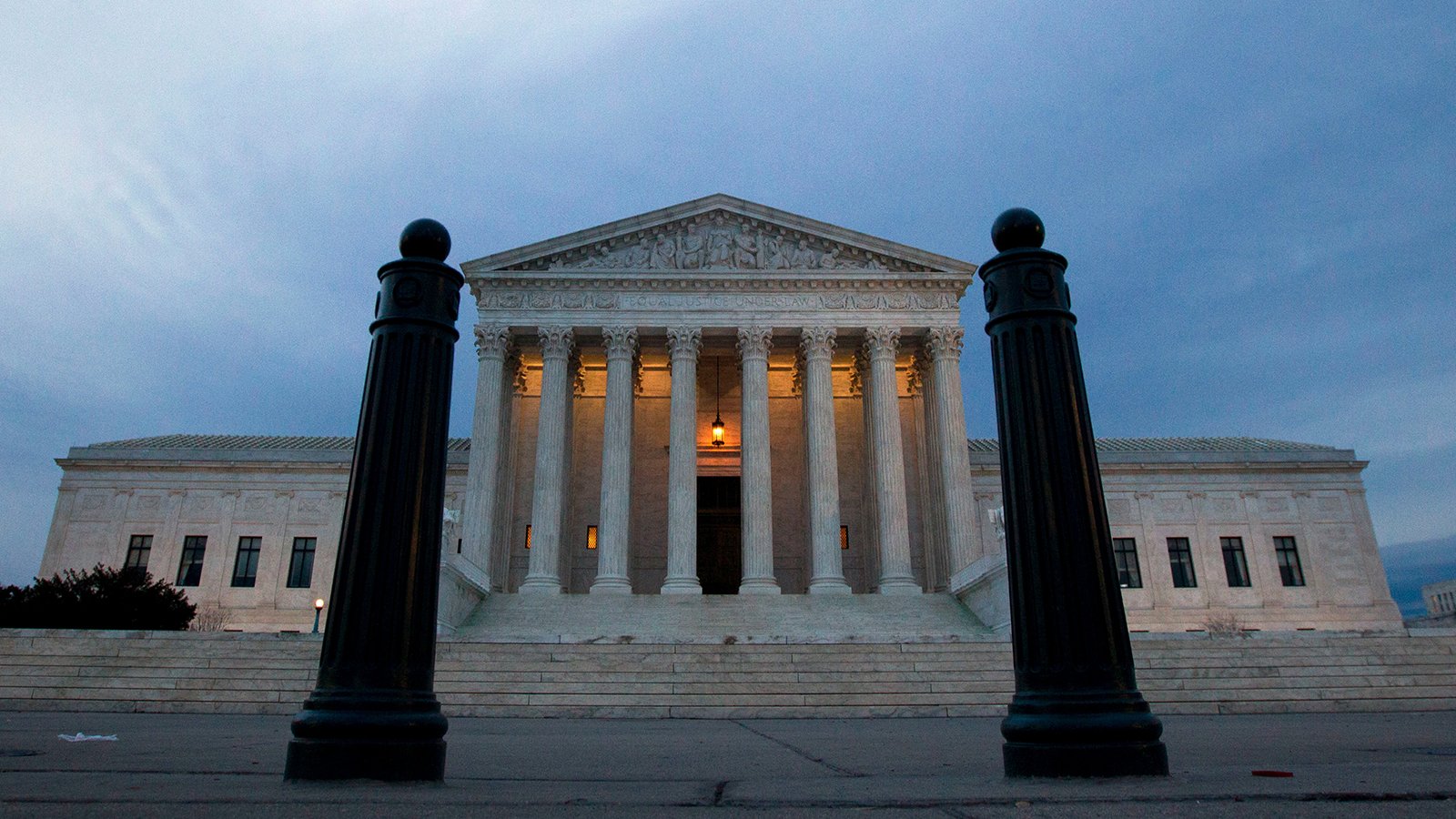 Religious conservatives lost the culture war over gay and transgender rights in the workplace this week.

In a 6-3 ruling Monday (June 15), the Supreme Court said the rights of gay and transgender peopleare protected from workplace discrimination. The ruling was a defeat to religious conservatives who have been waging a decades-long battle to hold on to traditional definitions of sexuality.

Worse yet, two conservative justices — Neil Gorsuch, who wrote the opinion, and Chief Justice John Roberts, who joined him – played a key role in the ruling.

The reaction was swift and it was harsh. Archbishop José H. Gomez of Los Angeles, president of the U.S. Conference of Catholic Bishops, called it “an injustice.” James Dobson, an evangelical social commentator, said it was “an affront to God.”

But others have turned their focus to other pending Supreme Court rulings on religious liberty this term, where they still hope to carve out significant wins.

Chief among them are two cases — Our Lady of Guadalupe School v. Morrissey-Berru and St. James School v. Biel — that involve a “ministerial exemption” to civil rights protections such as the one in Monday’s ruling, Title VII of the 1964 Civil Right Act.

The ministerial exception is a legal doctrine arising from the First Amendment that bars the government from interfering with religious institutions’ hiring and firing of clergy.

In those twin cases, two Catholic school teachers whose contracts were not renewed sued their schools, claiming discrimination. One sued on the basis of disability, the other on the basis of age. The schools have urged the high court to throw out the cases, arguing that the teachers qualify as ministers. 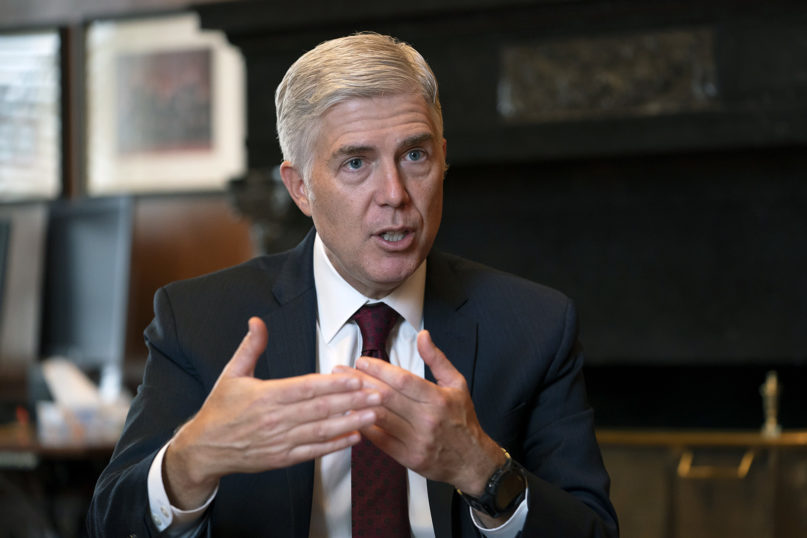 Associate Justice Neil Gorsuch, President Donald Trump’s first appointee to the high court, speaks about events that have influenced his life and the loss of civility in public discourse, in his chambers at the Supreme Court in Washington, Sept. 4, 2019. (AP Photo/J. Scott Applewhite)

In a similar 2012 case — Hosanna-Tabor Evangelical Lutheran Church and School v. EEOC — the Supreme Court ruled that an elementary school teacher could not sue the Lutheran school she worked for because she had some religious responsibilities, such as leading students in prayer, that made her qualify as a minister. In that case, the court ruled that the ministerial exception was not to be construed too narrowly. But the court did not spell out a formula to determine whether other employees qualify as ministers. It may now do so.

Religious conservatives hope that formula is as broad as possible and would include all religious school employees who fulfill a religious mission.

David French, a lawyer and the senior editor at The Dispatch, a conservative media outlet, suggested as much in a series of tweets.

“SCOTUS will likely expand the reach of the ministerial exemption — allowing religious institutions to functionally define which employees are exempt from nondiscrimination law,” he wrote.

Here's thread number two on Title VII cases. The more I think about the trajectory of the case law, the more I think SCOTUS will reach the jurisprudential equivalent of a version of the Utah Compromise. (More protections for LGBT Americans, with specific religious exemptions.) /1

A ruling is expected by the end of the month.

“There’s no way for American society to remain true to our constitutional principles and force religious institutions to violate their deepest held convictions in order to carry out their missions,” Moore told Religion News Service in an interview. “ I think the court will rule in the right way.”

A widely construed ministerial exemption could result in what French called “the jurisprudential equivalent of a version of the Utah compromise,” referring to a 2015 law balancing rights for LGBTQ and religious people in that state.

Other religion-related cases pending at the Supreme Court this term include Trump v. Pennsylvania and Little Sisters of the Poor v. Pennsylvania. In both cases, the court will decide if employers with religious objections to birth control may deny insurance coverage for birth control to their employees.

In an even broader abortion case — June Medical Services LLC v. Russo — the court could rule that Louisiana can require abortion doctors to have admitting privileges at a hospital near the clinic where they perform abortions. This is not a religious liberty case, but it could hand religious conservatives another victory in severely limiting the availability of abortion services — one of the big goals of Christian conservatives.

Then there’s Espinoza v. Montana Department of Revenue, in which the court will rule on whether public funding can be used for religious schools.

The Supreme Court ruling on workplace discrimination made it clear that legislative solutions will not likely emerge on issues of religious liberty anytime soon. Indeed, religious institutions will have to protect their turf in court battles for the foreseeable future, say experts.

“There’s no rational reason why LGBT groups would bargain with religious groups,” said Robin Fretwell Wilson, a law professor at the University of Illinois who served as an adviser on the Utah Compromise.

“Religious conservatives will fight skirmishes in the court,” she said. “Over time that’s a wearing enterprise.”

Gorsuch hinted as much when he wrote in his opinion that religious institutions may appeal to the courts using the Religious Freedom Restoration Act, a law that ensures that interests in religious freedom are protected.

But RFRA claims are much harder to litigate, said Ira Lupu, professor of law emeritus at the George Washington University.

“It’s much more complicated and harder to predict,” Lupu said.

Moore, however, cast a more upbeat eye toward the upcoming religious freedom issues.

“Looking at the case law over the past few years, from Hosanna Tabor to Hobby Lobby and beyond, we have reason to see that the courts have recognized the principles of religious liberty,” he said. “I hope they continue guarding that first freedom.”

Psalm 44.5
Through thee will we push down our enemies: through thy name will we tread them under that rise up against us..
King James Version 1611, American Edition