The recent series of attacks on church buildings and property continued Tuesday night, as a statue of Christ was toppled and beheaded at a Miami parish and a statue of Mary was daubed with red paint in Colorado Springs.

Recent weeks have seen a rolling series of acts of vandalism and destruction at Catholic churches across the United States, including arsons, decapitations, and graffiti. But while some of the incidents have been caught on camera, in most cases the perpetrators, and their motivations have yet to be identified. 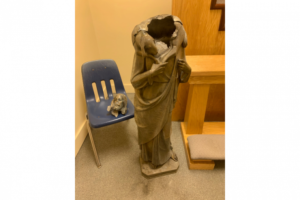 In response to the most recent attack, the Archbishop of Miami told police that the desecration of the statue of Christ should be treated as an act of hatred for the Church and faith.

“Late Tuesday night, July 14th or early Wednesday morning, July 15th, the statue of Jesus Christ as the Good Shepherd was desecrated; the head of Jesus was separated from its body,” Mary Ross Agosta, communications director for the Archdiocese of Miami, told CNA.

“The statue was located outside its namesake church, the Archdiocese of Miami’s Good Shepherd Catholic Church, in Southwest Miami-Dade County. The police were notified and Archbishop Thomas Wenski is asking this investigation be treated as a hate crime,” she added.

On Wednesday morning, the statue was discovered knocked over and missing his head. Fr. Edvaldo DaSilva, the parochial vicar at Good Shepherd Church, told local media that he did not believe the damage could be accidental, as the pedestal’s screws had been tampered with.

“They had some powerful hands to remove it,” DaSilva told WSVN of Miami. “Seeing what is happening in our country, I presume [it was deliberate], but we don’t have 100% assurance.”

DaSilva said that he is praying for whoever desecrated the statute.

“As a Christian community, we pray for those that have done this, that the Lord may forgive them and grant them the gift of conversion,” he said.

Surveillance cameras from the parish are being examined to see if they caught the vandalism on tape.

The area around the statute’s former pedestal now features a sign put up by parishoners reading “GOD wins over evil.”

Also overnight on Tuesday, a statue of the Blessed Virgin at St. Mary’s Cathedral in Colorado Springs was tagged with red paint in an act of vandalism. The vandal or vandals colored the statue’s cross, and also appeared to paint the statue’s toenails.

Fr. David Price, rector at the cathedral, told local media that the damage “looks more like a graffiti tag than anything else,” and added that the vandal wrote the word “redrum” on the base of the statue.

“Redrum,” which is “murder” backwards, is a reference to the 1977 Stephen King novel “The Shining.”

Price said that the statute had been vandalized before, and was cleaned off by the city.

The incidents Tuesday follow a weekend of similar acts.

In Tennessee, a statue of the Blessed Mother was decapitated In the early hours of Saturday morning, while, in Boston, a statue of Mary was set on fire, and in Brooklyn, a statue of her was tagged with the word “IDOL” in black spray paint.

On the same weekend, a parish in Ocala, Florida and a 249-year-old California mission founded by St. Junipero Serra were burned in fires. A man has been charged with arson in the Florida fire, and the California fire is being investigated as a case of arson.

In recent weeks, Catholic religious statues in California, Missouri, and other places have been toppled or vandalized by protestors including several of St. Juniperio Serra.

While some attacks on statues, most notably in California, have been committed in public by large groups with clear political affiliations, the perpetrators of other acts, including those against the images of the Virgin Mary and Christ, have not been identified.

Psalm 18.30
As for God, his way is perfect: the word of the Lord is tried: he is a buckler to all those that trust in him..
King James Version 1611, American Edition