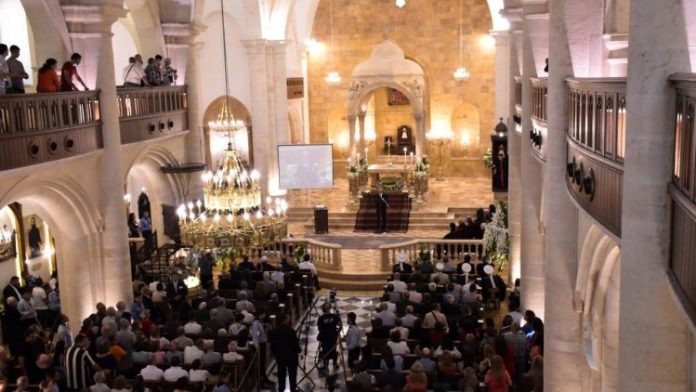 The Maronite Cathedral of St. Elijah in the northern city of Aleppo was bombarded with missiles on at least three occasions between 2012 and 2016 and suffered extensive damage when jihadists entered the city’s Christian quarter in 2013.

The restoration was financed largely by the pontifical foundation Aid to the Church in Need (ACN).

Maronite Archbishop, Joseph Tobij of Aleppo told Vatican News the restoration and re-opening of the cathedral have both a symbolic and practical meaning.

“It’s a sign of hope and rebirth, not only in a material sense but for the entire community, despite the fact that the numbers of Christians continue to dwindle, due to extreme poverty linked to the sanctions imposed on the defenseless population,” he said.

The reopening on 20 July of the 19th-century Cathedral celebrates a new lease on life for the Christians of Aleppo as the building had been devastated in 2013 by a group of jihadists whose aim was to destroy all signs of Christianity in the country.

Archbishop Tobij said the main difficulties encountered in the restoration were the raising of funds and the reconstruction of the original wooden roof.

Local artisans, he explained, lacked expertise in this area so a group of Italian architects stepped in to redesign the roof project.

Archbishop Tobij continued, “Without the help of ACN and the generosity of our benefactors we would not have been able to pray again and spread hope in the hearts of the faithful through the reconstruction of the cathedral.”

Archbishop Tobij said there have been no liturgies or other celebrations in the cathedral for eight years. Now, he said, “we resume life” and “it is a way to tell the people in Aleppo, in Syria and the world, that we still exist. We still exist, despite the great decline in the number of our Christians.”

ACN estimates that only 30,000 Christians remain in the city, compared to a pre-war population of 180,000. Aleppo was Syria’s most populous city before the war. It is now the second largest after the capital, Damascus.

The Maronite Archbishop noted that just like the territory and the population, the cathedral suffered great violence. Its rebirth is thanks to collaboration and solidarity.

He explained that this inauguration falls at a particular time for Syria under President Bashar al-Assad’s twenty-year stretch in power. It’s been a long period, Archbishop Tobij said, marked by war and division, but perhaps we are at a turning point with the renewal of Parliament.

From the security point of view, except for certain areas in north-northwest Syria, Archbishop Tobij said the situation has improved.

However, he said, the people are now subject to violence that is worse than the bombs: the economic sanctions and their direct consequence on poverty.

He is referring to the recent “Ceasar Act” economic sanctions imposed by the US that aim to deter foreign business activity with President al-Assad’s government.

He said people today find themselves not being able to afford even the basics, including medicines. “This gives people a sense of sadness and darkness for the future. We do not know what will happen to our future, and so many are aiming for the Western dream — to escape from here and hunger.”

Archbishop Tobij concluded with an appeal for prayers for the people of Syria “because prayer does a lot, it goes beyond the human and there is the Lord who acts.”

Erdogan to Meet With Trump as Turkish Forces Target Kurds, Christians in Syria

Psalm 22.12
Many bulls have compassed me: strong bulls of Bashan have beset me round..
King James Version 1611, American Edition

COVID vaccines are moral to use, say ethicists, Catholic bishops