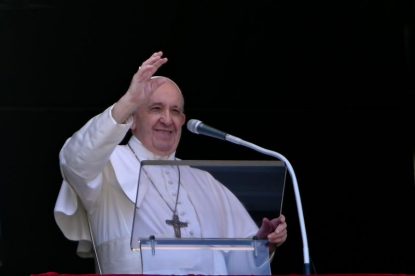 Telling people to “‘fend for themselves,’ should not enter into the Christian vocabulary,” he said.

The pope’s remarks were part of his reflection on the day’s Gospel reading about the miracle of the multiplication of the loaves and fishes.

In the reading from the Gospel according to Matthew, the disciples told Jesus he should send the crowds away as evening approached, so they could go look for and buy some food for themselves. Instead, Jesus told them, “There is no need for them to go away; give them some food yourselves,” and he proceeded to bless the little food they had, dividing it and giving it to his disciples so they could feed the thousands without the food ever running out.

“With this gesture, Jesus demonstrates his power; not in a spectacular way, but as a sign of charity, of God the father’s generosity toward his weary and needy children,” the pope said.

Jesus is fully “immersed in the life of his people, he understands their fatigue and their limitations, but he does not allow anyone to be lost, or to lose out — he nourishes them with his word and provides food in plenty for sustenance,” he said.

Pope Francis said Christians should be showing the same compassion and tenderness that Jesus showed toward the crowds.

Compassion is not “sentimentality, but rather the concrete manifestation of the love that cares for the people’s needs,” he said. It is the ability to suffer with others and “to take others’ sorrows on ourselves.”

“Perhaps it would do us good today to ask ourselves: Do I feel compassion when I read news about war, about hunger, about the pandemic?” he asked. “Do I feel compassion toward the people who are close to me? Am I capable of suffering with them, or do I look the other way, or ‘they can fend for themselves?’”

The pope asked that people understand God’s sense of compassion, “which is trust in the provident love of the Father and means courageous sharing.”

Psalm 95.7
For he is our God; and we are the people of his pasture, and the sheep of his hand. Today if ye will hear his voice,.
King James Version 1611, American Edition