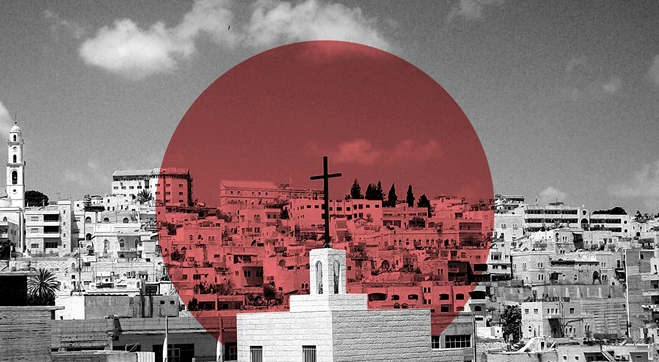 In Bethlehem—the little town of Jesus’ birth—only 1 in 5 residents today are Christians (22%). A decade earlier, more than 4 in 5 were believers (84%).

When the Ottoman era ended in 1922, Christians were 11 percent of the population of Palestine—about 70,000 people. According to the 2017 census by the Palestinian Authority (PA), they now number 47,000—barely 1 percent.

There are competing explanations of what—or who—is to blame. Some identify the Israeli occupation. Others describe Muslim chauvinism.

The overwhelming answer, according to a new survey of local Christians by the Palestinian Center for Policy and Survey Research (PCPSR), is economics.

Nearly 6 in 10 respondents identified this as the main reason they consider emigration (59%).

The poll, commissioned by the Philos Project, a US-based initiative promoting positive Christian engagement in the Middle East, surveyed 995 Christians in 98 Palestinian locations throughout the West Bank and Gaza Strip in January and February.

Compared to the economy, other cited reasons paled in significance.

Only 4 percent blamed corruption, while 3 percent gave a religious explanation.

But this particular question measured the primary driver of desire to leave the Holy Land. What secondary factors might be involved?

Philos “affirms the right of all Christians to live and flourish as indigenous citizens,” and its Gaza-born Palestinian advocacy officer, now living in the West Bank, wanted to discover the reality—or at least the perception—about why many believers were not flourishing.

“Step-by-step, we worked on questions that represent concrete situations,” said Khalil Sayegh. “I personally experienced them, and I know that our community did too.”

About half of Palestinian Christians are Greek Orthodox (48%), while 38 percent are Latin Catholic. Evangelicals and Lutherans represent 4 percent. (The rest are Greek Catholics or Syriac Orthodox/Catholics.)

The gain corresponded to a decline among the “not religious,” who fell from 27 percent to 17 percent. The somewhat-religious middle held steady at about 46 percent.

“Those with a stronger religious identity feel a sense of mission: willing to pay the price to remain.”

But for all Christians who are not considering emigration, the sense of mission is evident in 4 of 5 of them: 43 percent want to demonstrate Palestinian solidarity, while 39 percent refuse to abandon their family and friends.

A loss of a sense of belonging, however, roughly corresponds to the 36 percent considering emigration. While 70 percent of Christians feel “fully integrated” into Palestinian society, 30 percent do not.

Munayer described one factor as the corruption of the PA, the local government, which 4 in 5 Christians agree on: 52 percent see a “great deal” of corruption in the PA, while 30 percent see it “to some extent.”

And overall, 2 out of 3 Christians have little to no trust in the PA (66%). The courts (trusted by only 16%) and police (trusted by only 22%) fare even worse. One out of five Christians report discrimination when seeking PA services (20%). And 3 out of 4 are “dissatisfied” with how Christianity is portrayed in the PA educational system (76%).

But while Munayer recognizes these failures as part of the reason why Christians are emigrating, there is a clearer culprit behind the economic crunch: Israeli occupation and the siege on Gaza. These “restrict and choke” the possibility for development, he said.

“It is important to stress that this is not a religious conflict—it is political,” he said, while acknowledging a religious dimension.

“The situation is complex and has many elements, but clearly the Israeli occupation is ultimately the one that determines what happens here.”

The concerns of the Palestinian Christians surveyed bear this out.

And in terms of actual experience, 42 percent must regularly cross Israeli checkpoints, and 14 percent have lost land to the occupation.

“We are frustrated by how some try to manipulate the reality using certain figures in order to serve certain agendas,” said Isaac, who frequently provides pastoral care to youth contemplating emigration.

“It suits some to blame ‘Muslims’ for our situation, trying to hide the reality of decades of Israeli occupation and forced migration.”

In terms of actual experience, 1 in 4 report being called an infidel (27%). And 1 in 10 reported ill treatment, where their children are made fun of at school for their religion (11%) or they themselves suffer harassment by Muslim neighbors (10%).

Most Christians do report general friendliness. While 2 in 3 live primarily in a Christian-majority area (66%), 24 percent reside in mixed neighborhoods, and 11 percent are minorities among Muslim neighbors.

Nearly 2 in 3 said they had “excellent or normal” relations with Muslim neighbors (65%), while only 10 percent described relations as “medium or bad.”

Isaac blamed the “fear and suspicion” on the rise of ISIS. Munayer cited extremist Islamic propaganda in the media for the “gap between reality and perception.”

“You can build a good relationship with your neighbors,” said the president of the recently recognized Council of Evangelical Churches in the Holy Land, “but not with an online hate group.”

Yet despite positive interactions with Muslims, and while identifying the occupation as an important driver of emigration, Kakish cites the promise of Israel as contributing to a striking statistic.

A similar PCPSR poll during the same time period found only 37 percent support among Palestinians overall. But for Christians, it was seen as the best means to achieve peace while securing safety for their community.

“There will be less discrimination from the Israelis in a one-state solution,” said Kakish. “And Israel has better living conditions, such as in hospitals and employment.”

“The rights-based approach is what is most appealing,” he said, “as Christians are being denied many basic human rights at the moment.”

Isaac recently published The Other Side of the Wall to theologically advocate for a “shared land” perspective. Whatever the perceived advantages of Israel, he said the traditional two-state solution is “collapsing before our eyes.”

Sayegh attributed one-state support to Palestinian Christian belief in democracy, coupled with the above described fear of an Islamic Palestine. Three in four (73%) view a single state as the best model for governance, while only 11 percent view the PA as democratic.

Yet even with the PA’s faults, Christians cited a striking level of religious freedom in Palestine. Half said it was “high or high enough” (50%), while an additional quarter said it was “medium or average” (27%).

And 8 percent reported inviting Muslim acquaintances to convert to Christianity.

Kakish said that despite Christians being “cautious” in outreach, it is acceptable to discuss religion and “there is more openness than ever before.”

While Muslims have always challenged Christian belief—23 percent of respondents stated that Muslims have asked them to convert to Islam—Christians now “feel more empowered” due to better apologetic resources available online, Sayegh said.

However, Munayer, who teaches a course at Musalaha on freedom of religion and belief, believes the increase in Christian religiosity has fueled an increasing self-isolation. While they are “not shy” in expressing their beliefs, Christians are detaching themselves from both Jews and Muslims. (He surveyed Christian university students around Bethlehem and found they show less interest in interfaith friendships than their Muslim peers.)

So while Christian numbers continue to dwindle, where should their hope come from?

Perhaps this is because Palestinian Christians already believe they are living their faith.

“We have a committed community that understands our mission to witness, to serve, and to advocate for justice and peace,” said Isaac.

“Our role as churches is to bring the message of hope, as we find it in the gospel.”

Psalm 101.7
He that worketh deceit shall not dwell within my house: he that telleth lies shall not tarry in my sight..
King James Version 1611, American Edition