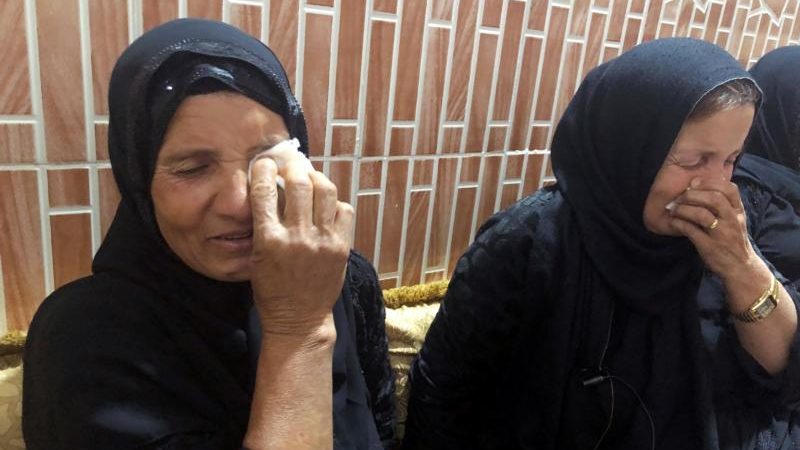 Several Iraqis and a former Vatican envoy have praised Pope Francis’s upcoming trip to Iraq as both a much-needed sign of encouragement for the battered local Christian community, as well as an opportunity to promote unity and mutual respect.

“For me, this visit will be good because I feel that Pope Francis is near to us, the Iraqi people,” Father Roni Momicka told Crux, explaining that for Christians living in the Middle East, “the Mother Church,” meaning Rome, “is far away for us.”

“This visit for me will make us united together. We feel that the Mother Church is with us and thinking about us,” he said, adding, “this visit will give the people of Iraq a special peace and will let them laugh, because we lost this laughing and this smile.”

After decades of discrimination and persecution at the hands of radical groups such as Al Qaeda and ISIS, the visit, Momika said, will give him “more power to stay in Iraq and to serve the people here in Iraq.”

Currently completing a masters’ degree in family studies at Sagesse University in Lebanon and charged with caring for Iraqi refugees living in the country, Momika is from Qaraqosh – known as the Christian capital of Iraq before the 2014 ISIS insurgency.

After ISIS invaded his village in August 2014, Momika, who was in seminary at the time and happened to be abroad when the militants stormed Qaraqosh by night, reunited with his family in Erbil, where they, like so many others, had fled for refuge.

Since he could not return to seminary in Qaraqosh, he finished his priestly training in Lebanon and was ordained a deacon and later a priest alongside three other men inside a makeshift, prefabricated church in one of the largest refugee camps in Erbil, called the Aishty camp.

Until his recent transfer to Lebanon, he oversaw a women’s group at one of the largest parishes in Qaraqosh, which is still being rebuilt, leading them on pilgrimages to ancient monasteries ransacked by ISIS and organizing retreats, processions, and days of spiritual reflection.

Pope Francis is scheduled to visit Iraq March 5-8, despite the coronavirus pandemic, making it his first international trip in over a year due to travel complications related to COVID-19.

When he goes, the pope is slated to visit the cities of Baghdad, Erbil, Qaraqosh, Mosul, and the Plain of Ur, traditionally held to be the birthplace of the biblical figure of Abraham.

Many local Christians, like Momika, are excited for the pope’s visit, which they see not only as an act of support, but an impetus for peace.

Speaking to Crux, Father Ghazwan Baho, who is pastor in the Iraqi town of Alqosh, which is roughly six miles from Mosul and was the only village not to be invaded by ISIS, also voiced his excitement.

“For Iraq it will be a great hope to bring peace in our country,” he said, adding that at a personal level, he believes the trip will fulfill “the dream of St. John Paul II,” who wanted to visit Iraq in 1999 but was unable to.

Baho is also a guest professor at the Pontifical Urbanianum University in Rome, where he teaches two months out of the year. During his stay in Rome, he also serves as pastor of the city’s Joachim and Ann parish.

Baho said it was during one of these 2-month periods that he was invited to a large audience with John Paul II in the Vatican’s Paul VI hall to pray during a “spiritual visit” to the Plain of Ur, the birthplace of Abraham, which John Paul had wanted to visit, and which Francis is scheduled to.

Speaking of the impact of the ISIS invasion in the Niniveh Plain, Baho said it was “a great injury to the history of our country, especially for Christians, and it is the reason for the immigration of Christians [outside of] Iraq.”

“I hope the visit of pope will be as a medicine for us,” he said, adding that when Mosul was liberated from ISIS, “I was praying that our people will have hope to return back to their villages and thank God it is happened.”

Pope Francis’s visit, he said, “will encourage us to stay and we will stay in our country.”

Rahma, a young Syriac Catholic woman living in Qaraqosh, said for her the fact that Pope Francis is going to visit her hometown is something special.

“The Pope seeks peace, love, and humanity as Christ is represented on this earth and through his coming, he will announce to all the inhabitants of Iraq with different religions that Christianity is the path of love,” she told Crux.

“I feel that the people of Qaraqosh desperately need the pope’s visit, which is full of peace, as we have been missing peace for many years” with decades of persecution and, for many, long-term displacement.

Rahma noted that in the past 20 years along, swaths of people have migrated outside of Iraq, and even now, people are leaving, and many more are considering it.

“This is sad, because we are effectively losing our land and our identity,” she said, but voiced confidence that the papal visit will give the remaining Christian population in Iraq some much-needed encouragement.

When Francis comes, “he will indirectly tell the Iraqi government, ‘this is my people, and I will not dispense with it,’” Rahma said, adding, “there are many countries that do not know anything about the Christians of Qaraqosh, and it is important that they know that there are brothers who need their moral support.”

Similarly, another young woman living in Qaraqosh, Slvana, another young Syriac Catholic, told Crux that Pope Francis’s decision to come to Iraq, and to visit her hometown of Qaraqosh, is “finally our dream come true.”

“I feel happy because this visit means a lot for me; so many people will know there are Christens in Iraq, especially like our town Qaraqosh. I feel something good will happen after this visit, like peace,” she said.

Qaraqosh itself is still in the process of being rebuilt. Roughly 70 percent of the city has been restored to some form of working order, and thousands of Christians, mostly Syriac Catholics, have returned and are living there again full time.

According to Momika, there are a lot of significant buildings and structures that are still charred and in ruins, and which need to be restored, including the city’s cathedral, which dedicated to Mary Immaculate and is one of the largest Christian churches in the Middle East.

Momika voiced hope that the cathedral will be restored in time for the pope’s visit, “because it is our history.”

“This visit means a lot for the Iraq people,” he said. “Pope Francis takes care of the Iraqi people and the Iraqi people are in his mind, and he’s thinking about them and this visit will give a lot of things for Iraqi people to stay in Iraq, and to let the government think about Christians.”

Despite the coronavirus pandemic, people on the ground are not concerned, Momika said, explaining that “With corona or without corona, all of the people are waiting for this visit.”

Momika said he hopes to return to Qaraqosh for the papal visit but doesn’t know whether he will be able to take a break from his studies at that time. His dream, he said, is to meet Pope Francis, “and to let him bless me.”

Referring to the status of Mosul, which after its liberation from ISIS in 2017 was still feared by Christians who didn’t know who to trust, Momika said the situation has improved, and many Christian families have already returned, and a church has been reopened with Mass every week, and where the pastor lives full time.

“This step is good for Christians, because it’s a point of contact with the Muslims and the government in Mosul,” he said, adding that whether it’s in Mosul, Qaraqosh, or another part of the Nineveh Plain, he is not worried about security, because there are Christian militias patrolling who will “do all the best to make peace and to protect the pope and all the people who will come to welcome him for his visit.”

In a Dec. 10 article published in Vatican newspaper L’Osservatore Romano, Italian Cardinal Fernando Filoni, prefect of the Congregation for the Evangelization of Peoples and a former Vatican ambassador who was stationed in Iraq from 2001-2006, said he was also moved when he the announcement of the pope’s trip.

“The news aroused great emotion. Many in Iraq cried, I was told. I am also excited, having shared with that noble people and in particular with Christians, life, tragedies and hopes in the past 20 years,” he said, adding, “Iraq is not any other country.”

Not only is it the site of ancient civilizations and where many biblical figures called home, but it also holds a unique position in the region, he said, calling Iraq a “hinge” between the Middle East and central-western Asia.

Recalling the many wars that have been fought in the area throughout the centuries, he said the pope when he goes “will find in the folds of this land, soaked in the blood of innumerable conflicts, a story that weighs on the shoulders of the populations who live there.”

Christianity has “gradually and dramatically decreased” in the last century, he said, noting that until a few decades ago, Christians were mostly concentrated in Baghdad where there were more opportunities for work, in the Nineveh Plain, and in Kurdistan.

Pointing to the many difficulties Christians in Iraq have endured over the centuries such as discrimination and persecution, Filoni said Pope Francis will bring “something new.” Namely, the invitation for type of fraternal coexistence he underlined during his visit to Abu Dhabi in 2019 to sign a joint document on the topic with the Grand Imam of Egypt’s prestigious Al-Azhar mosque and university, Ahmad Al-Tayyeb.

“It is not secondary that this happens after that event and that it brings those principles of coexistence of which the land of Abraham, today Iraq, absolutely needs,” he said.

For Filoni, who reflected on visits he’s made to Iraq in recent years in his capacity as head of the Vatican office for the Evangelization of Peoples, the heart of the papal trip will be the message of solidarity and brotherhood the pope will bring.

“I learned to love the Iraqi people and their Christian communities in the five years of service as the diplomatic representative of the Apostolic See in Iraq,” he said, noting that he was stationed in Iraq shortly after the fall of Saddam Hussein, which he said, “brought chaos and the Christian community became the object of ferocious attacks, killings, confiscation of homes and property; those who could fled.”

“The bishops, clergy and religious, all of us shared the drama of the bombardments and of war. This has cemented esteem and affection,” he said, insisting that the pope’s visit to Iraq will be “an injection of encouragement, so that Iraq becomes a country of civil and respectful coexistence.”

Psalm 102.17
He will regard the prayer of the destitute, and not despise their prayer..
King James Version 1611, American Edition