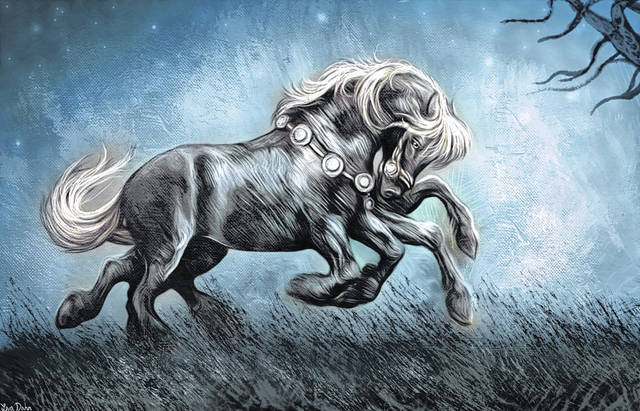 On Christmas Eve, millions of children across the country will set out a plate of milk and cookies as a snack for Santa Claus — a “thank you” for the gifts he leaves in stockings and under the Christmas tree.

The tradition has been going strong in the United States for nearly a century, but it didn’t use to be the case. Older tradition had the ritual reversed with stockings hung by the chimney stuffed with sweets for Santa, not from him.

But leaving cookies for Santa didn’t just start 100 years ago, it goes back. Way back. In fact, many scholars believe its roots can be traced back to thousands of years ago — all the way to Norse mythology.

Have you ever heard of Odin?

According to mythology, Odin was the king and ruler of the gods of Asgard and every year, he would lead out a spectacular Yuletide hunting party.

His sleigh — yes, he had a sleigh — was pulled by an eight-legged horse named Sleipnir. Kids would leave out treats (apples, water and hay) for the horse to try and entice him to stop by their house. Once there, Odin would leave gifts for young ones as gratitude for feeding his beloved horse.

Even today, many Dutch families continue the tradition and would never think of going to bed on Christmas Eve without leaving out a carrot or two for good ol’ Sleipnir.

The thing about traditions is they rarely have a singular source — and cookies for Santa is no different.

If you turn from the Netherlands to Germany, one could make the argument that our offering of cookies to the man in red is an evolution of the decorations that people hung around traditional paradise trees.

A paradise tree was basically an earlier version to today’s Christmas tree only it was decorated with real food — preferably sweet things — like apples, breads and cookies.

The story over there goes that Santa, wiped out from his long journey, would snack on the tree’s decorations as he laid out gifts for the children. When people eventually made the switch from edible ornaments to glass ones, children fretted about Santa going hungry and began to leave “the decorations” out on a plate for him.

In America, it is generally agreed upon that although the tradition may have began in Europe, it was strengthened here during the depression when many parents wanted to teach their children that it was better to give than receive.

Many families, without the money to buy gifts, would instead scrounge up what baking materials they could and would leave cookies for Santa in lieu of gifts for themselves. It was a way for parents to keep the holiday magic alive for little ones when there was no money for anything else.

No matter where the idea comes from, it is a tradition unlikely to end anytime soon. For now, the only thing really left up for debate on the matter of leaving cookies for Santa is: Which kind of cookie is his favorite?

Our money’s on chocolate chip.

A guide to understanding 7 different religious holidays in December

Psalm 10.18
to judge the fatherless and the oppressed, that the man of the earth may no more oppress..
King James Version 1611, American Edition