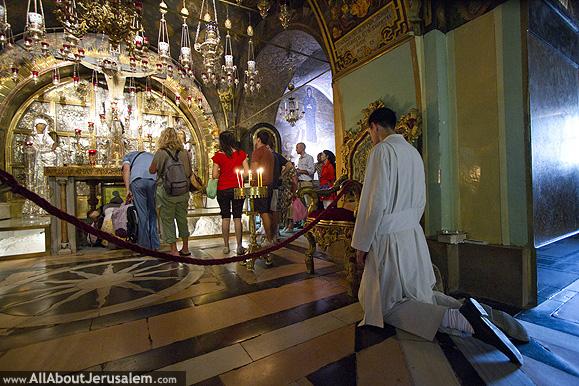 The majority of them having long histories amounting to hundreds of years). Church clergy, monks and nuns, and representatives of various Christian organizations from the four corners of the earth permanently reside in Jerusalem. Each and every one of the Christian congregations and Christian bodies that operates in the city represents large communities comprising millions of adherents, countries, and powerful international Christian bodies. Jerusalem is the only city in the world in which nearly all Christian churches and denominations seek to establish a presence.

As of Christmas Eve 2011, Christians represent a small minority of the population of Jerusalem. The percentage of the Christian population within Jerusalem is 1.9%, as compared to 19% in 1946, during the latter days of the British Mandate. In absolute figures, the number of Christians in Jerusalem decreased from 31,300 in 1946 to 14,600 at the close of 2010. The main reason for this decrease in the number of Christians over the past 65 years is the outcome of the 1948 war, following which not only the British and most of the European Christians who had been living in the city departed, but also a significant portion of the Christian Arab residents.

According to official estimates the number of Christian Arabs residing in Jerusalem in 1945 reached 17,000, but in 1961 only 12,000 Christians were registered in both sides of the city (11,000 in the Jordanian side and 1,400 in the Israeli side – both Arab and non-Arab Christians). Since the conclusion of the Six Day War there has been a trend of stability in the number of Christians in Jerusalem: In September 1967 the number of Christians in Jerusalem’s new area of jurisdiction measured 12,900. In 1988 the number reached 14,400, a figure that has remained fixed (with minor deviations) to this day. The percentage of Christians within the city’s population, however, decreased from 2.9% in 1988 to 1.9% at the end of 2010 as a result of a low birthrate and the absence of Christian immigration to the city, especially in comparison to the large increase in the city’s Muslim and Jewish populations.

Since the beginning of the 20th century, the emigration of Christian Arabs abroad – primarily to North and South America and to northern Europe – has been a salient pattern that increased significantly following the crisis of the 1948 war and, to a lesser extent, following the Six Day War in 1967. A total of 223 non-Arab Christians (presumably mainly immigrants from the former Soviet Union and other countries) reside in the area of Neve Ya’akov and Pisgat Ze’ev; 207 in the areas of Kiryat Yovel, Ir Ganim, and Kiryat Menahem; 259 in the areas of Ge’ulim (Baka’a), Talpiot, and East Talpiot; and 103 in Gilo.

In addition to this Christian population there are an unknown number of migrant laborers (foreign workers) and refugees (mainly from South Sudan and Eritrea) who work in Jerusalem. Salient among these is the congregation of Filipinos who worship at the church in the Ratisbonne Monastery in the center of the city and in other churches.

Despite the small proportion of Christians among the city’s population, the Christian presence is physically prominent in the form of various church steeples and monasteries, primarily in the areas of the Old City and Mount Olive. A survey that we undertook during the 1990s revealed the presence of about 160 churches in Jerusalem (including churches within schools and Christian institutions). Another survey, undertaken in the early 2000s, revealed the presence of 117 Christian institutions and sites in the Old City and Mount Zion. In addition, the historical activities of the churches and the European powers behind them – primarily from the middle of the 19th century until World War I – turned these churches into a prime real estate asset comprising (according to a study by Israel Kimhi of the Jerusalem Institute for Israel Studies) lands totaling approximately 5,000 dunam, nearly six times the territory of the old city or 10% of the pre-1967 territory of Jerusalem.

These territories are concentrated in important and central parts of the city such as the Old City, the Historic Basin surrounding it, the Valley of the Cross and its environs (including part of the lot on which the Knesset is built), the public garden surrounding the San Simon Monastery, the area of the Mar Elias Monastery adjacent to the Har Homa neighborhood, and others. This situation makes the churches a most significant factor in all matters relating to the development of the city in general and of the Historic Basin in particular.

Another very salient factor is the Christian presence in the educational and scholarly sector. Approximately 20 educational institutions that operate within the Jerusalem area are affiliated with various Christian churches or organizations. A large portion of the students at these institutions is Muslim (primarily from the elite segment of Muslim society), which means that the institutions are contributing significantly to Arab society in general in East Jerusalem. In the area of higher education and research, Jerusalem has a large number of institutions that are affiliated with various Christian churches or organizations and in which primarily foreign students from abroad study.

Foremost among these are the Tantur Ecumenical Institute, the Franciscan Biblical School (Studium Biblicum Franciscanum) at the Via Dolorosa, the Pontifical Biblical Institute, Beit Joseph of the Dormition Abbey, the German Protestant Institute of Archeology at Augusta Victoria, the Dominicans’ École Biblique on Nablus Road, the Swedish Theological Institute at the Prophets Street  and  many others. In the social services sector, Jerusalem has dozens of healthcare, welfare, and charity institutions operated by Christian organizations and bodies. Salient among these are the Augusta Victoria Hospital, Saint Joseph Hospital, Saint Louis Hospital, St. John’s Ophthalmic Hospital, and important charity organizations such as the Pontifical Mission and Caritas.

Finally, we note the important sector of Christian tourism. A total of 66% (approximately 2.4 million) of the tourists who visited Israel and Jerusalem in 2010 were Christian (compared to 30% Jews). Their visits to the city entail an element of pilgrimage or  “Culture Tourism”. The year 2010 was a record-setting year in terms of the number of tourists visiting Israel (approximately 3.45 million). Occupancy of Jerusalem hotels in late 2010 reached about 90%, making it difficult to find an available room in the city.

Approximately 25 hostels for pilgrims and tourists in Jerusalem operate churches and Christian organizations. Among the known hostels are Casa Nova (the Franciscan hostel), the Austrian Hospice and the Lutheran Guesthouse in the Old City, the large hotel operating in the Notre Dame Center near the New Gate,  St Andrew’s  Scottish Guest House, and the YMCA. There is widespread agreement among tourism experts that the potential of pilgrimage tourism and “cultural tourism” has not been fully actualized, and that much may be done to advance it. The local Christian communities and bodies that operate in Jerusalem are allies and vital participants in the development of this tourism.

In summation, despite the small demographic presence of Jerusalem’s Christian communities and the fragile and tenuous standing of Christian bodies, which operate in the city under the shadow of Jews and Muslims who are struggling for control, the Christian dimension is of the utmost importance in strengthening Jerusalem’s universal standing. Both hawkish sides – Israelis and Palestinians – have a clear interest in preserving the status of the Christian element (in all its denominations).

The Christian contribution to the city’s panorama and uniqueness – particularly in the basin of the Old City – is immense. Its economic importance for pilgrimage-based tourism is also decisive.

Historically, it may be said that Christianity was to a large extent the “loudspeaker” that broadcast the holiness of Jerusalem throughout the world and made it a “global city.” Jerusalem is the only city in the world that is sacred to all Christian denominations and organizations as well as to Judaism and Islam. The disappearance of Christian communities and churches from the panorama of the city and surrounding metropolis would strike a severe blow to the charm of the city and to its special standing, which is unparalleled anywhere in the world.

Psalm 119.72
The law of thy mouth is better unto me than thousands of gold and silver..
King James Version 1611, American Edition